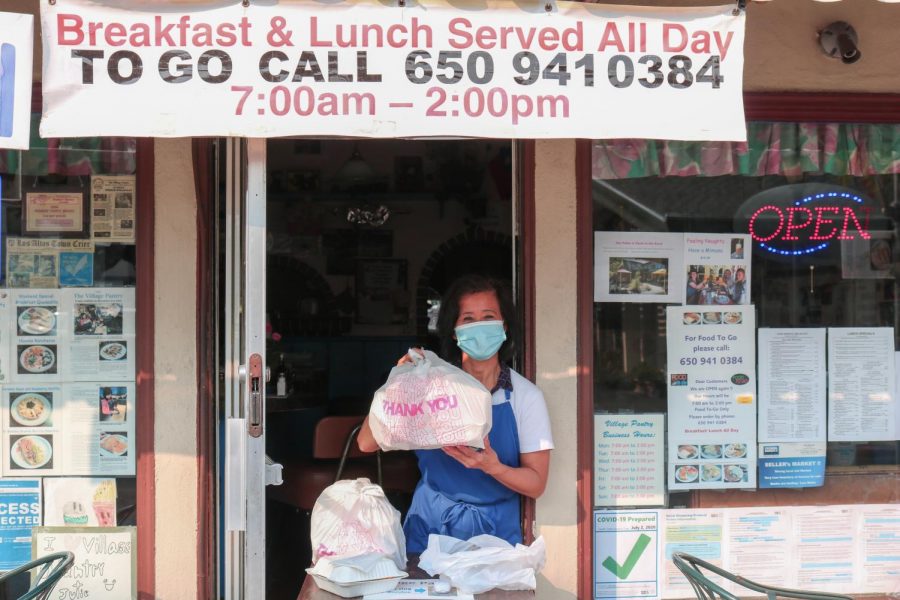 Julie Ogilvie of Village Pantry stands in front of her store. The BAE Initiative, a group of LAHS seniors, has interviewed and discussed with nine Los Altos businesses to understand how they dealing with the pandemic.

In Downtown Los Altos, whispers permeate every level of business — from law firms to pizzerias — over the arrival of a “new normal.” The discussion began in March when storefronts indefinitely shuttered, and has endured as COVID-19 continues to tear through California. It has also turned store owners against one another, each one fighting for a future that no one can predict.

Over the past four months, the five of us in the Bay Area Enterprises (BAE) Initiative — seniors Alex McDowell, Ben Falkenburg, Seth Moos, Stella Huang and Vivek Chudasama (it should be noted that Stella also serves as Editor-in-Chief of The Talon) — have spoken with nearly a dozen businesses about what this “new normal” actually means. Most of our work focuses on fundraising for business-related causes, making flyers and public service announcements and conducting surveys on public perception of business. Our most important tool in highlighting the struggles and disunity facing businesses has been interviewing.

Then and now, we believe that the biggest obstacle facing businesses is their lack of a voice. By asking businesses individually about how they were doing, we wanted to understand the struggles that came with operating a business during a pandemic.

Yet as we started interviewing more businesses in Downtown Los Altos, a pattern emerged: a pressing demand for street closures. These are measures designed to help restaurants reopen safely via outdoor seating.

As we walked down main street in early June, street closures had still not come to downtown. The symptom of this was plain: mountains of chairs lay stacked against lifeless storefronts, out of use.

One of these businesses we decided to speak with was Lisa’s Tea Treasures, owned by Thao Nguyen. We interviewed her the day before the Town Hall meeting on Tuesday, June 9, which would discuss street closures. Our interview was accentuated by urgency; Nguyen, whose business was down by 90 percent, said few restaurants could afford to play the waiting game on street closures. The businesses needed them now.

When BAE attended the city council meeting the next night, we didn’t expect that street closures would lead us to discover the hidden tensions in downtown. In fact, as the meeting began, we had no clue that there would even be a debate about street closures.

Yet proponents and opponents of the plan soon rose to speak. Restaurants The Post and State of Mind Public House, for instance, were both vocal supporters of the measure, whereas retailers including Brownhouse Design and Cook’s Junction, were against it. Khatchig Jingrian, owner of jewelry store Smythe & Cross, spoke on behalf of the opposition, fearing a drop in sales if the plan were approved.

As businesses gave their arguments to the council, BAE also voiced some points for the city to consider, including the fair distribution of seating, parking access and safety equipment.

The meeting concluded at midnight, at which point we were all exhausted but intrigued. We had just discovered a side of small business we hadn’t yet considered: Like most, we assumed that in lean times, businesses would band together for measures designed to benefit everyone. But the debate that night was high-strung; restaurants and retailers were approaching a breaking point.

After that meeting, we realized the value in digging into restaurants as part of a bigger picture. We reached out to the businesses who spoke at the Town Hall meeting to better understand their perspective. Smythe & Cross and State of Mind agreed to speak with us.

We spoke to Jingrian a couple weeks after the meeting and began our talk by asking him why he’d opposed street closures during the Town Hall meeting. He explained his rationale for opposing street closures with what he called “The Science of Shopping.”

Simply put, it states that the actions of a customer and the money they spend is controlled by a careful equilibrium of variables that must be optimized.

“People have specific tendencies as to where they park, where they visit, which doors they go through,” he said. “As simple as it might be, whether it’s going through a specific door or aisle. Whenever you change someone’s habits, you have to re-educate them. You’re trying to get the customer to do things they aren’t used to doing.”

Jingrian insisted that street closures would turn away customers who want to shop downtown by upsetting that balance. He based his conclusion on data which retailers collected during street closures; apparently, they did worse business in the periods where streets were closed rather than when streets were open.

However, our data disagrees: Street closures appear to be encouraging foot traffic, not limiting it. In 2015, the good old pre-pandemic days, well over 60 percent of Los Altos residents made the trip downtown at least once a week. We placed an advertisement in the Los Altos Town Crier to gather statistics on frequency of downtown visits. The results indicated that 75 percent went less than four times in the month of May, and 80 percent intended to increase their visits downtown after street closures began.

Yet the other businesses we interviewed didn’t base their arguments on an army of consultants or surveys; instead, they based it on community. The owner of pizzeria State of Mind Public House, Lars Smith, spoke with us on that topic. He claims to not buy into the idea of a zero-sum game for businesses during the pandemic.

Smith’s restaurant is just past the intersection at 4th Street and State Street, meaning it doesn’t benefit from the street closures. Nevertheless, when we heard Smith advocating for street closures in the later hours of the city meeting, we were intrigued by his call for “a slice of happiness” to a community longing for connection.

In our interview a month afterward, when we asked him how his thoughts on the matter had changed, he still had choice words against “The Science of Shopping.”

“If you’re telling me that we’re bringing people downtown that weren’t coming before and creating some sense of normalcy, but you’re not capturing any of the sales,” he said. “The problem might not be those streets — it might be what you’re selling.”

The period following street closures remained tense. Jingrian, in particular, lamented the continuation of street closures, continuing to build his case that street closures were a losing decision for the city; he has a chance in September to go head-to-head with restaurants again. For the time being, he simply told us that “emotions have been heightened.”

Nevertheless, businesses like The Post have taken full advantage of Open Streets. During our recent trips downtown, we encountered a wildly different world than the one we found in March: Empty storefronts, vacant streets and gray skies had become sunny boulevards with tables lined up outside restaurants, with music playing in the background.

Yet as we continued interviewing restaurants after the street closures, it became clear that even with a brighter picture, the nightmare for restaurants hadn’t ended. For some like Village Pantry, street closures had even made the situation even worse. Parking concerns had made their establishment even less accessible to older clientele.

There are other issues, too — ones that some businesses told us privately. For instance, municipal services continue to charge businesses exorbitant prices for garbage they don’t produce and equipment they no longer use. Communication between the city and businesses has been spotty as well.

Most tellingly, restaurants in Los Altos like Red Berry Coffee Bar nearly closed, and others are barely scraping by. A Good Morning Cafe, Village Pantry and Cafe Nur are all prime examples.

It is our hope that these businesses are the ones who make it through; in many cases, they seem to have the least voice in the group, but the most authenticity. All of them have been part of Los Altos for over a decade. Each has their own loyal clientele. Most of them are immigrant-owned.

Here is a list of businesses we’ve talked to — you can find their stories on our Medium page: