The Average Lifespan of a Boy Band 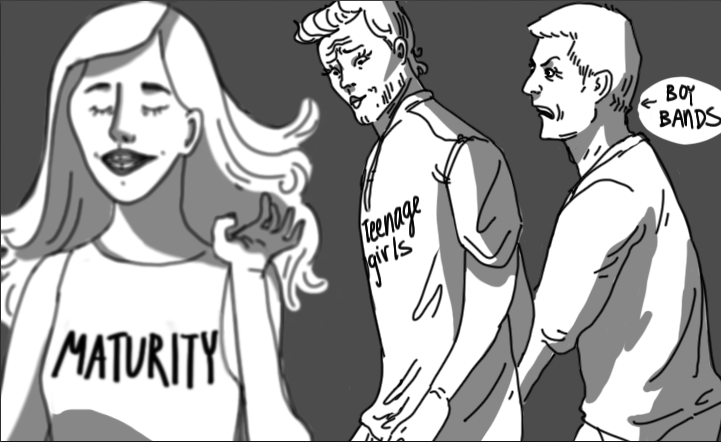 By Emma Kwan and Daniela Gloster

A boy band performs on a stage, surrounded by thousands of fans, holding up posters and screaming the lyrics to one song after another. The majority of the crowd are teenage girls who have brought equally excited friends and unwilling parents to the concert, waiting hours to buy merchandise or VIP passes to take pictures with their favorite pop stars.

This scene is familiar scene to many. For those who grew up in the 90s, boy bands like NSYNC and the Backstreet Boys come to mind; early 2000s kids will remember bands like the Jonas Brothers or Big Time Rush. For today’s teenagers, the phrase “boy band” is immediately associated with One Direction.

Boy bands have existed for decades, targeting a specific audience that usually includes teenage girls ages 10 to 18. The slight changes in trends from generation to generation have created groups that seldom overlap as they each dominate their own decade. Because groups must work together to promote one brand, their creative license is limited, leading to shorter lifespans as fan bases outgrow a band’s music and band members seek to reinvent their musical style.

Each group was created differently, but all emphasized marketing toward certain demographics and were carefully catered to attract their specific fan base. NSYNC was the creation of producer Lou Pearlman, who held auditions for young male singers to join a group aimed at teenage girls. Similarly, the Jonas Brothers was created alongside a Disney TV show aimed at “tweens,” appealing to younger audiences through kid-friendly themes. On the British TV show “The X Factor,” One Direction was formed by producer and judge Simon Cowell from a group of solo artists.

Each group reached the height of its fame early on in its career, as producers capitalized on current trends — such as the increased use of synthetic instruments in pop — to create music that specifically attracted large audiences.

But the bands always begin to lose relevance. Their target audience start growing up and losing interest. Because each group was created to fill a certain niche, the bands were restricted by their inability to change their musical style.

NSYNC and the Jonas Brothers stayed true to their original sound, but both bands soon lost relevance because they didn’t adapt to their listeners. NSYNC simply faded out, with their album sales dropping from almost 13 million to 5 million from 2000 to 2001. The Jonas Brothers broke up after their 2009 album sold only 757,000 copies, down significantly from 2,409,000 copies sold in 2007. They disbanded abruptly in the process of making an album.

One Direction went a different route, and tried to adjust its music to its maturing fan base. But they never managed to recapture the commercial success of their first albums — sales dropped from 2,095,000 to 1,000,000 in the span of four years. Their eventual decline in popularity, coupled with the artists’ individual desires to produce their own music, led in 2016 to their current hiatus.

An example of an artist who can and has reinvented themselves countless times is Taylor Swift. After her latest reinvention, accompanied by singles from her new album, she holds the first and fourth spots on the Billboard Hot 100 List.
Unmoored by a required allegiance to a target audience or a band, Swift has the ability to change her image as much as she wants, allowing her to stay relevant. From country singer to pop crooner, she has grown with her audience, and become something of a marketing genius along the way.

Following their split, the boys of One Direction each went on their own paths of reinvention, met with varying levels of success. Each former member has been on the Billboard Hot 100 List in the past year as each artist has found their unique style. Yet while each singer has gained popularity for his song, each inevitably lost some of their original fanbase by changing their style.

One Direction may have monopolized boy bands for our generation, but the possibilities are endless for generations ahead. Just as NSYNC and the Jonas Brothers each had their own distinct styles, the boy bands of tomorrow will follow the same formula as its predecessors, but with their own unique twists. However, their popularity will likely be short-lived as fan bases continue to age out of target demographics, leading bands to either successfully age with their fans or break up to pursue solo careers.