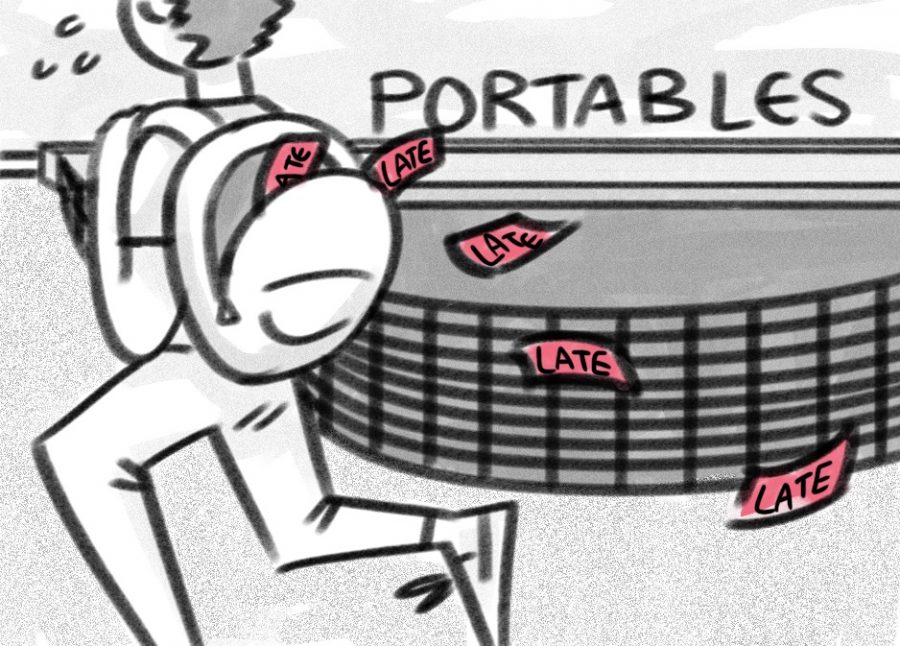 By Nina Crofts and Cedric Chan 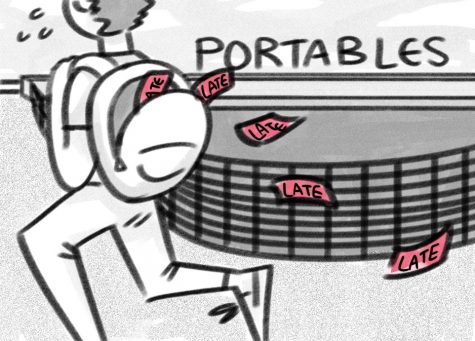 Walking across the entire campus to get to history every day feels like a marathon. Having to run to get there on time is agony. And doing that all just to miss out on several valuable minutes of a lecture—that’s just absurd. The administration needs a better solution to portable tardies than the 90 second grace period.

In June 2018, the cities of Los Altos and Mountain View voted yes on Measure E, which puts money toward construction at Mountain View High School and Los Altos. Construction of new classroom buildings and an auxiliary gym at Los Altos began this year: one next to the student parking lot and the other by the baseball field.

Since the beginning of the school year, teachers and parents have been complaining to administration about students’ constant tardiness to their classes in the portables. To ease the burden of such a long classroom commute, the administration launched a 90-second tardy ‘grace period.’ Students must individually reach out to their teachers to be granted this grace period, and there must be some evidence that getting to the portables on time is not possible for that student.

This, of course, creates a number of issues that have not been addressed in a meaningful way.

First off, the entire concept of the 90-second policy is vague: Who counts as being ‘far enough’ to constitute a need for the extension is not clearly defined, leading to only a small group of students actually getting these extensions. Teachers have been choosing students coming from certain buildings—the 300 wing, for example—to give the extension to at their own discretion. This policy does not protect the rest of the students, many of whom still consistently struggle to make it to class on time.

From the teachers’ perspective, however, it does make sense to reduce the number of extensions given. Let’s do the math—yes, ew. 90 seconds. 180 days per year. 50 minute periods (usually). That’s 270 minutes lost. That’s more than an extra week of instruction lost. Some might say that losing a few minutes in the beginning of class isn’t noticeable, but in classes where lectures last until the bell rings or even past that time on most days, the impact is discernible.

The reason why this is so problematic is that it is compounded by another issue regarding time. If you have to use the restroom, for example, it gets worse. Trips to the 900 wing or theater bathroom, the designated bathrooms for the portables, can take up to 10 minutes.

All of this leaves students with no choice but to take extreme measures to get to class on time. One path students take is walking across the field—an offense that leads to harsh chastising from the administration. But even when the administration closed the track gates, this didn’t stop; instead, it led to students jumping over the fence. Although it looks cool, not everybody’s skilled in parkour, which makes this a safety hazard.

No solution will please everyone. Both sides will need to compromise; however, there is a better solution than the one in place right now.

Instead of an amorphous guarantee of an extra 90 seconds in passing period, passing periods for the impacted class periods (i.e., two, four, six and seven) should be extended an extra minute. That’s only four minutes extra, so without taking time out of brunch or lunch, dismissal could be shifted to 3:34 p.m without a heavy impact on extracurricular activities. Especially considering the fact that the district is already going through new bell schedule proposals—a result of the new legal requirements for school start times—this shouldn’t be too difficult to implement. Adding a couple of minutes to the end of school shouldn’t have any noticeable effects.

The current policy unduly burdens both teachers and students. The whole point of the construction is to create buildings that will enrich learning, yet they seem to be having the opposite effect. Especially when many students suffering today will never see the products of the construction come to fruition, the burdens of balancing commute times, class times and managing inexorable tardies are not ones that they deserve to carry.  School is for the students, and the administration needs to ensure we can receive uninterrupted learning, in all classes. Minor obstacles should not be ignored at the expense of learning. Nothing should.