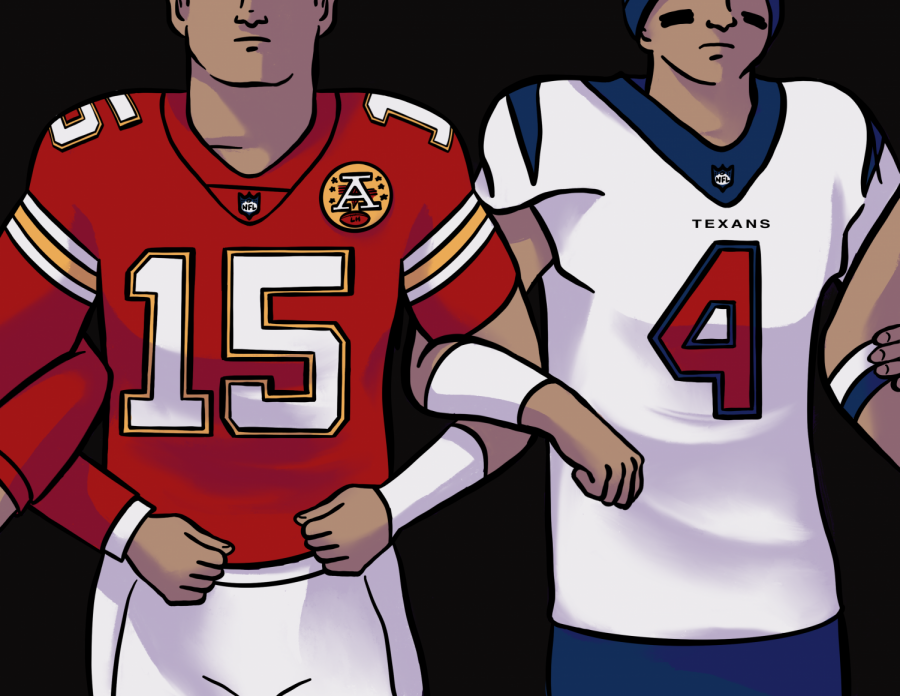 The Houston Texans and Kansas City Chiefs linked arms in a moment of silence for those killed by police brutality before their game on Thursday, September 10. The LAHS football team aims to show a similar act of solidarity with the Black Lives Matter movement.

By Anika Sikka and Mira Sundar

To show their solidarity with the Black Lives Matter (BLM) movement, players from the Kansas City Chiefs and Houston Texans came together before their game on Thursday, September 10, standing together and offering a moment of silence for those killed due to police brutality.

Before kickoff, both “Lift Every Voice and Sing” and the national anthem were played before the Chiefs and Texans game. While the Chiefs were on the field for both anthems, the Texans chose to remain inside the locker room.

“It’s really not about the flag,” Texans Head Coach and General Manager Bill O’Brien said during the post-game conference. “It’s about making sure that people understand that Black lives do matter and that there is a systemic racism problem in this country. And so that is what the players decided to do.”

After the anthems finished, the two teams joined at midfield, linking arms in a show of unity for the BLM movement. Players also showed their support by wearing stickers on their helmets of the names of those recently killed due to police brutality.

However, not all spectators received this gesture well, with many booing as the two teams emerged on the field. Some previous NFL fans complained that they didn’t want football to be political and that, after this incident, they wouldn’t be supporting the NFL.

“Get woke, get broke,” Sam Moore, who was outraged by the Texans’ message, commented on BZ Production’s YouTube video.

Others expressed their frustration by calling this an act of propaganda.

“This movement is a war tactic in this political chess match,” former fan Leon Shepard commented on the same video.

While many fans expressed their disappointment with the NFL, others commended them for taking a stance.

“So beautiful! Showing unity and class,” Texans fan Ana Pérez Mackenzie commented in response to a Twitter post by the Texans. “At the end of the day racists will be racist but the NFL and Chiefs are on the right side of history!”

The Los Altos High School football teams aim to show support for the BLM movement this upcoming fall season as well. According to Head Coach Dave DeGeronimo, the team captains will work with him to decide on what stance to take during the national anthem.

“Whatever our players choose to do, I want them to show that they’re united because that sense of togetherness is the most important thing in a team,” DeGeronimo said.

Players on the team do hope to show unity but have differing views on how the team should express its support for the BLM movement.

“To show support, we could do something similar to what the NFL did — COVID-19 friendly, of course,” senior Colby Cook said. “We could stand centerfield during the national anthem, arms locked and masks on. Or, even just for one play, instead of making the play, just taking a knee to show our support.”

Wide receiver junior Cole Rafferty agrees with Colby that the team should show their support but does not think the football team should mimic the Texans’ actions during the national anthem.

“To me, the flag is more than just a flag,” Cole said. “It’s an ideal. Since I have family who fought in the military, kneeling for the anthem would be really disrespectful because it’s saying ‘screw you’ to all the troops.”

Since football training is just starting back up, the team has yet to have the conversations about anti-racism and its role on the football field.

“I’d be disappointed in our team if we didn’t do something to show unity and say ‘we hear you,’” Colby said. “Whether it’s something small or big, we need to do something, because this is bigger than the game.”