Terrible Traffic and What to Do About It 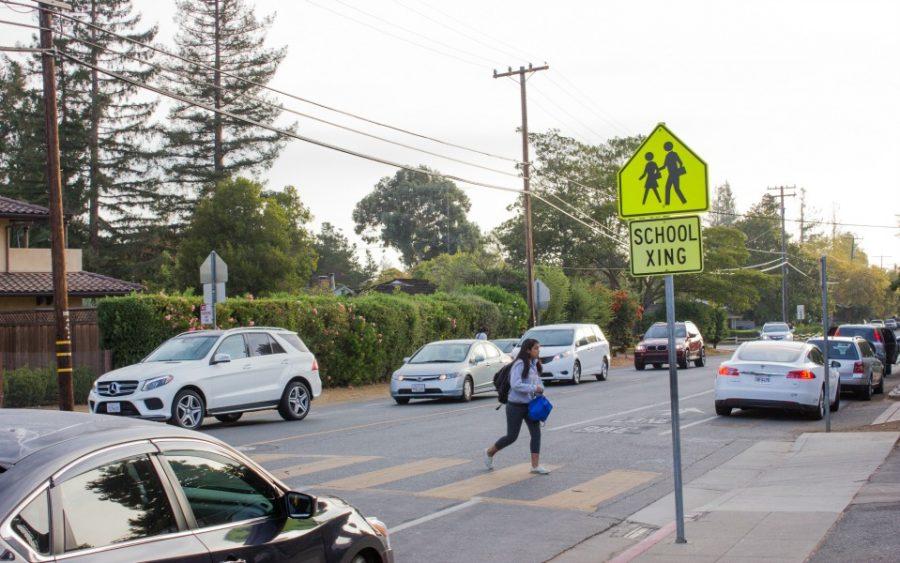 The intersection of Jardin Drive and Casita Way at 7:45 a.m. is peaceful. Cars are parked neatly along the curb behind the tennis courts, and the stark morning air is undisturbed, quiet. For now, all is well. But as the minutes crawl closer to the first bell at 8:05, that intersection turns into a living hell.

From all sides people rush to get to the school. Frantic mothers in minivans line up at the crosswalk honking and trying their utmost to keep from running over the pedestrians swarming on the street and filing into the chain-linked gates. Down Casita Way, they walk on the unpaved road, filling up the sides of the street until all that is left is a narrow passage, pushing large biking squads into the center of the road. A bulldozer worries about picking up a student instead of a pile of dirt for construction, and an obnoxious cruiser blows exhaust on the old man trying to mow his lawn as they roar past.

Every morning and every afternoon, I bike down these roads and marvel at what a mess it all is.  I see at least one close call a day between a driver and a pedestrian or biker because all three parties struggle to evenly share the road, and I’ve heard stories of those who have already been hit. I don’t know about you, but I’d like to live to my graduation day. And at the current state in which traffic is controlled at the back of our school, pressing safety concerns are at a dangerous high.

Something needs to be done, but it’s hard to identify a single source to all these problems other than the simple fact that Los Altos has an absurd amount of students given the space and resources available to cater to them. The total population count is currently over 2100, and many of these students enter and leave campus through the backstreets. The flow of people getting to and from school has grown to an unruly capacity, and with everyone in a hurry to get to class, many people prioritize speed over safety.

There are other things factoring into traffic as well. Many homeowners around the campus area are undergoing renovations, leaving trucks and other equipment to fill up roadsides and make it harder to navigate on them. Also, Los Altos has recently been doing work on repiping Casita Way, requiring some sections or an entire street behind the school to be shut down.

There are simply not enough roads to accommodate the problem we currently face in regards to transportation at our school. How can we as a community reduce traffic and congestion to save ourselves time and reduce safety hazards?

For one thing, I would call upon Los Altos to add some sidewalks to the streets in close proximity to the school. A large part of the reason that pedestrians walk so far into the center of the road is that there isn’t really anywhere else for them to be. Currently, streets taper off unevenly at the ends and leave nothing but tree roots to walk on. If there were actually sidewalks to accommodate the large number of walking students, they wouldn’t feel so inclined to take up the road and, well, walk on the side.

I also think that a crossing guard with true elementary school vibes at Jardin and Casita would actually greatly improve congestion. A couple weeks ago, I caught Mr. Rosenberg trying out the idea for himself, and riding down the road was so greatly improved that for once I didn’t feel I had to be hyper aware of every movement around me. Unfortunately, this was a one-day-only job for Rosenberg the Crossing Guard, and next day traffic was back in its usual state. But that one day was enough for me to hold onto hope that with someone controlling car flow, we may all be more likely to get home in one piece.

A perfect example of a well trafficked street is Almond Avenue in the front of the school. Although equally as busy as Jardin Drive, traffic on Almond runs much smoother and has caused fewer problems than in the back. A little secret to their success: Almond has both sidewalks and a crossing guard, proof that both will actually make a difference.

I am aware that all these solutions take money. And time. Both are things that the city or the school district may not be willing to give to a problem which, until an accident happens, may seem insignificant. But I’ve said it once, and I’ll say it again, this is not an issue to be accepted and swept under the rug. It affects over a thousand lives daily and is a hazard that can be fixed with a couple adjustments. As a student, staff member or parent, the easiest way you can help is to carpool. If the number of single passenger cars were halved by people sharing, we would already be in an infinitely better spot than we are now.