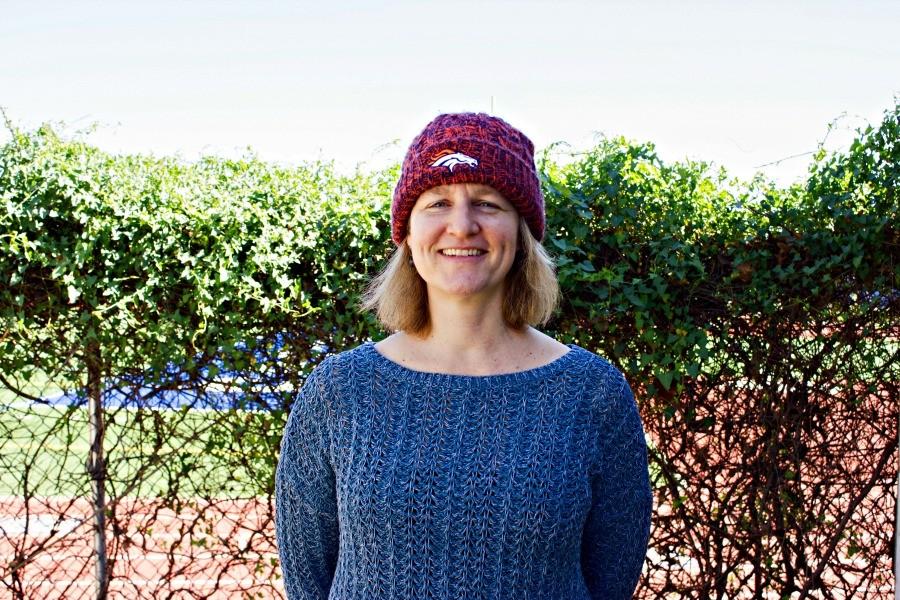 Geometry and engineering teacher Teresa Dunlap proudly sports her Broncos beanie. Dunlap has supported the Broncos since her childhood, and recently wrote a guest commentary for the Denver Post about her favorite team and Peyton Manning. Photo by Kimia Shahidi.

“What is it about humans that make them passionate, one way or another, about a sports team?”

It’s the question that geometry and engineering teacher Teresa Dunlap often wonders about. And even though Dunlap was raised a football fan ever since she could remember, the answer still evades her. Recently, Dunlap wrote an article on the Denver Post about her thoughts on Peyton Manning’s legacy and her all-time favorite team, the Broncos. Her passion and undying devotion for her hometown Broncos has given her a new perspective on the game, the players and what being a true fan really means.

“When I was four, [my family] moved back [from the Bay Area] to Denver,” Dunlap said. “It was [my father’s] hometown and team, and they weren’t very good back then. But he would sit and watch the games, and I would always pester him because I wanted to spend time with him. So I would start asking him questions, and he would very patiently explain to me the rules. Once he started explaining to me the rules, I started enjoying it more.”

The 1977 Denver Broncos, with the likes of quarterback Craig Morton and head coach Red Miller, managed to defy the odds and make it to the Super Bowl XII. As a result of the Broncos’ growing success, Dunlap joined her community’s vibrant fan base when she was 10.

“That happened to be the first year that they ever went to the Super Bowl,” said Dunlap. “The whole city just went crazy and was totally into it. So it was a very exciting time, and then obviously they lost that Super Bowl. But to me, that fan base was a really special group. They were like this goofy band of crazy fans that didn’t take it so seriously and they weren’t entitled to anything. They appreciated and supported the team. I felt it was really cool to be a part of that community.”

Dunlap considers the memories created during her childhood as the largest factor that contributes to her adult football fandom.

After seeing the constant barrage both online and in real life from Broncos fans regarding the Broncos poor performance early in the 2015-2016 season, Dunlap decided to write an opinions article for The Denver Post before this year’s Super Bowl, which the Broncos won. In the piece, she urges other fans to stay faithful and to support their players for their hard work for the team, no matter the result of the Super Bowl.

“I was paying attention when Peyton Manning came aboard four years ago, and how well received he was in the community,” Dunlap said. “He was playing really well, and [but] as soon as he wasn’t playing as well, a lot of fans turned on him. I thought this was very disrespectful for somebody who had done so much for that community, and it troubled me a little bit.”

Understanding the greater issue at hand, Dunlap decided to voice her opinion to other fans who shared her beliefs. Sadly, she has no plans to continue writing guest opinions. Dunlap is proud of the final product that came out of her hard work.

“It was actually a pretty fair amount of time that I put into that [article],” said Dunlap. “I had some really strong feelings, and it would be hard for something I didn’t really feel strongly about.”

But looking back on her football enthusiasm, Dunlap cannot deny its prevalence in her life. For her, the passion and energy she has rooting for the Broncos day in and day out has been a constant in her life.

“I just know it has always been a part of me,” said Dunlap. “I didn’t see that until I realized that it’s been this common thread in my life since I was ten.”

Although she has moved back to California since her childhood and has lived and taught in the Bay Area for the past 25 years, Dunlap doesn’t feel the same about any of the local sports teams.

“I don’t know what causes that,” Dunlap said. “Maybe [it’s because] when it’s [the team] created, if it’s a childhood thing [then] it stays with you.”

While she hasn’t been able to find the elusive answer for why fans can be so passionate about a sports team, she believes that just being a fan and being part of a community intertwined by the common bonds is a better gift than any answer. Nevertheless, there are a lot of interesting questions that Dunlap has conceived throughout her years observing the growth of the Broncos fan base. Many of these questions are shared by the majority of football fans.

“What is this about a football team and football game?” said Dunlap. “I mean the team is not that important, but the community is and for some reason, it bonds over this one common thing. I think there is something interesting about that. I never quite understood it, but I know I can’t quite shake it.”