The boys tennis team had another strong season in the De Anza Division, finishing second behind Monta Vista High School. The team advanced to the CCS quarterfinals and also had its two team captains, seniors Spencer Simonides and Anthony Bello, win the CCS doubles championship for the second straight year.

Even though the Eagles were not able to grab the elusive league title, they did manage to beat powerhouse Monta Vista twice, splitting matches in the league and in the Fresno Tournament.

This years’ squad had no dearth of experience as it returned every one of its players from the 2012 team.

“It helped that we didn’t lose anyone from last year’s team, so the same leaders were continuing to lead and the fact that everyone was comfortable together on the team was definitely big for this season,” Spencer said.

For CCS, the Eagles were seeded fifth and received a first-round bye. As they entered the second round of team CCS, they had to contend with a new format designed to prevent teams from stacking their lineups. This year’s new rules dictated that each school would have three doubles teams and three singles players, and every singles player and doubles team would play one set against singles players and doubles teams from the opposing school. Whichever school won more sets would win, and if there were a 9-9 tie, the total games would be the tiebreaker. Under the new rules, winning 9 sets effectively secured a win.

“I know a lot of coaches have complained about the format change because it forces a lot more players to play three sets, which many players aren’t used to, and it is completely different from how all of the teams have played all regular season,” Spencer said. “I personally have come to like it though, because it makes it so teams can’t stack, even though this format change is an imperfect way to prevent the problem of stacking.”

The next match for the team was a quarterfinal matchup against the number four seed Bellarmine College Prepatory, where the Eagles lost 6-12. Bellarmine came out ready to play against Los Altos and jumped out to a 6-0 lead against the Eagles after the first round of sets.

“I think going down 6-0 just made it hard for our team to dig back into that match because we were down, and everyone knew we couldn’t lose 4 more sets in the rest of the 12 sets, which is mentally difficult,” Spencer said. “Bellarmine is a really strong team. They have a lot of highly ranked national tournament players, and we knew going in it was going to be a tough match.”

After the the loss to Bellarmine, the season still continued for Spencer and Anthony. Last year, Spencer and Anthony were the first doubles team in Los Altos history to take the CCS doubles title. Knowing that they would have targets on their backs this year, the duo came out hungry for another title this spring.

“[We thought] it would be really fun to win doubles once and then win it again,” Spencer said. “[Winning one title] had never been done before at our school, let alone having a repeat winner for the tournament. So we thought we’d do it both for the school and because it would be a lot of fun and a lot of competition.”

The two qualified for CCS after winning the SCVAL doubles championship before CCS began. Spencer and Anthony were the number one seed in the tournament, and did not drop a set en route to their second straight CCS doubles title. They beat a Valley Christian High School doubles team of Bryce McElvie and Bernardo de la Cabada 6-4 and 6-2, to win the title.

“We got a couple of [favorable] matches that helped us work our way into form and I feel like the finals of that league tournament we started to hit form,” Spencer said. “Going into the finals, we didn’t take anything for granted.”

Both Spencer and Anthony will both be playing tennis at Pomona College next year, and they will go into college as two-time CCS doubles champions. 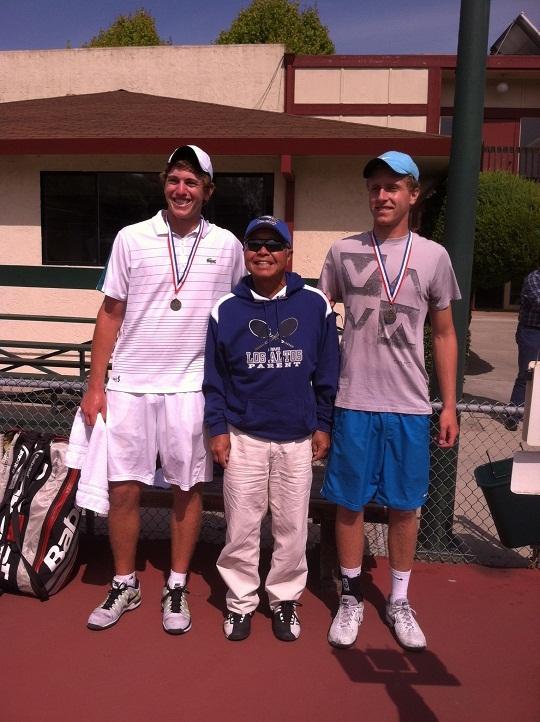