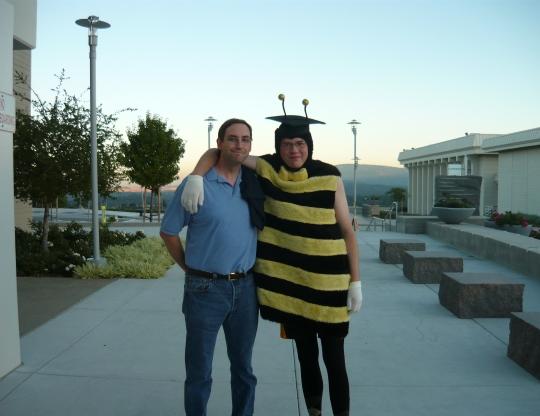 The Bee is a fundraiser for Project Read, an organization that supports the Redwood City public library. The three-teacher team from LAHS calls itself Spam Spam Egg and Spam, a name inspired by the Monty Python sketch, “Spam.”

Messner said at the beginning of the evening that the team’s goal was to get past the first round. Spam had to compete against teams including The Bees of Wrath, Kaiser Doctors, the Deep Sheep, reigning champions the Ineffables, and this year’s winner Zap Think Tank.

Spam made it through the first round with 25 correct answers out of 30 questions.

In the first round, the team missed questions about Lady Gaga’s real name, the most common element by weight in the human body, the last letter in the Greek alphabet, the comet Levy Shoemaker and the Maurice Podoloff trophy.

The team kept up its winning streak with 10 correct answers out of the 15 questions in the semi-finals.

In the final round, Spam earned 1 out of 7 points by answering that “otalgia” means ear pain.

“I only knew that because I had a job in college at the otolaryngology department at Stanford transcribing documents,” Rosenberg said.

The members of spam are still proud of their final-round performance.

“[Because we were able to answer a question,] our dignity is still intact,” Messner said.

Messner said he felt nervous at first, and Phipps added that he felt confident for the first round.

“The difficulty of the questions definitely increased,” Rosenberg said.

According to Spam, they prepared only by playing the game Trivial Pursuit during two lunchtimes in Messner’s room.

The members of Spam attributed their success to different factors.

“I read a lot, listen to the right radio, watch the right movies, have the right conversations,” Messner said. “[I] hang out with the right people.”

The team successfully answered some questions, including one about the smallest type of tide, called a neep tide, using the techniques of intuition, guessing and teamwork.

“[We were] equally strong just in different areas,” Messner said.

“The more you know increases the quality of life,” Phipps said.
Messner became involved in the Bee because his father taught at Cañada College.

“I basically grew up on this campus,” Messner said. This was his fifth year competing.

First-time competitors Rosenberg and Phipps plan to return next year.

“Oh yeah, we’re going to do this again, it was too fun,” Phipps said.
“We’ll be back next year,” Messner said.