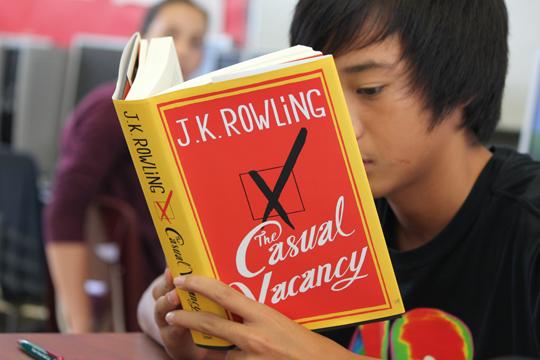 In “The Casual Vacancy,” Rowling takes a stab at her first non-fantasy novel with the intent to appeal to an adult audience. Her book contrasts starkly with her previous “Harry Potter” series, but also retains several elements that readers are familiar with. Just as before, Rowling’s story gets tediously verbose at certain parts; and in this case the story takes a while to pick up. Differences abound as well, the genre, the focus of the story and the characters have all changed. Perhaps the most distinct difference that people may notice in Rowling’s novel is her use of profanity. Her writing is littered with coarse language, something that jumps out at readers expecting a read with less vulgarity.

The reader is immediately immersed in the fictional little English town of Pagford, a seemingly pleasant and proper town. As the reader soon discovers, however, Pagford is a town full of hostile friction and snobbish people. The pretentious residents of Pagford bear far more of a resemblance to Uncle Vernon and Aunt Petunia than the characters that we are accustomed to seeing.

The story begins when Barry Fairbrother, a member of the Pagford parish council, collapses in the parking lot of a golf club, killed by a sudden aneurysm. Fairbrother’s death sets into motion a series of events that make up the story and creates a “casual vacancy” that leaves the rest of Pagford’s town council scrambling to figure out what to do and where to proceed with the contentious issue of The Fields. The Fields is an area with cheap housing, high unemployment rates and violence, nestled in between Pagford and an adjacent town, Yarvil.
Although they were created to house Yarvil residents, The Fields are maintained and supported at the expense of Pagford. Barry Fairbrother had been the chief council member in support of the continuation of this relationship with The Fields community, but his death allows those against the intercity connection to seize the opportunity and rid themselves of their responsibility for The Fields. Political turmoil ensues over the course of the story’s 500 pages, and this acts as the locus of conflict in the book.
Rowling tells the story from varying views of multigenerational characters, from the middle-aged, portly Howard Mollison to the rebellious teenager, Krystal Weedon. Rowling is, for the most part, particularly adept at painting a vivid picture of each of these characters’ personalities. Despite this intimate look into each character’s life and background, most will find that they have a hard time empathizing with characters in the midst of their struggles and problems – they have none of the warmth and charm that characterized the cast of the Harry Potter series. Howard and Shirley Mollison secretly find satisfaction in Barry Fairbrother’s death. Simon Price verbally and physically abuses his wife and children. Terri Weedon is a heroin addict and prostitute. The stories of the characters that do strike readers as interesting, however the teenagers, Andrew Price, Fats Walls, and Krystal Weedon, are unfortunately not fleshed out enough. Instead, the spotlight is directed toward the adults of Pagford in order to interest older, adult readers.
Even as one becomes accustomed to the unsparing use of foul words, other themes not typically present in Rowling’s writing spring up. Sex, domestic violence, drug addiction and death are all adult topics that the story explores, often in both alarming and vivid detail. Fairbrother’s death in the first few pages of the story is one of many graphic scenes in the story: “The pain… sliced through his brain like a demolition ball… his skull was awash with fire and blood… Barry was lying motionless and unresponsive on the ground in a pool of his own vomit.”
It’s easy to tell that the popularity of “The Casual Vacancy” results from the author’s acclaim and success, rather than the charm.