Taking a piece of home to Harvey Mudd 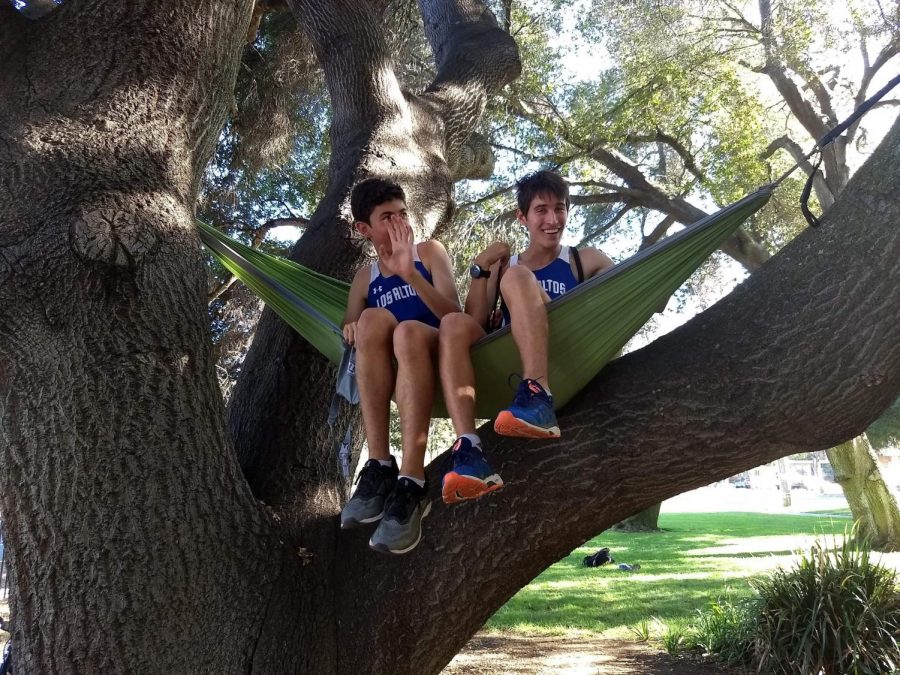 After the 2018 Homecoming Parade, Cohan (left) and Sage (right) hang out in a hammock together. "We were really hoping to go [to Harvey Mudd] together," Sage said. "It's pretty great."

Usually, graduation symbolizes a goodbye of sorts. Friends are preparing to move to different schools, different states and sometimes even different countries. For seniors Adam Cohan and Adam Sage, though, this is most definitely not the case. The boys, who obviously share a name, will soon share another identity as well: Division 3 cross country runners at Harvey Mudd College.

On Friday, December 13, Cohan and Sage were both accepted to the school through its early decision application, confirming their spots on the cross country team. The decisions were not set to release until that Sunday, so the boys were getting ready to have dinner with some friends and were caught by surprise with the news.

“A minute before my ride showed up, Adam texted me that the decisions were out. I was planning on opening it with my parents, and we’d maybe film it or something, but it was just me in my bathroom with my dog,” Cohan said. “I got in and I started screaming, and my dog got scared and ran away. We texted each other at the same time, like, ‘Ahh, I got in!’”

“We all got to celebrate, which was really nice,” Sage added.

After taking multiple trips down to southern California to tour the school and get to know the team, both boys decided Harvey Mudd was their number one choice, citing the balance of academics and athletics as an important factor.

“From what I’ve heard, the coach is really good about making sure that you get your education and your athletics in at the same time, which I think is really awesome,” Sage said.

“The vibe of the athletes there really struck me as almost how our team at Los Altos operates. Everyone on the higher levels of the cross country team runs to win and trains hard, and everyone’s there to compete, but everyone’s there as a student first,” Cohan confirmed.

All Harvey Mudd students apply undecided, which gives both boys time to figure out which of the school’s six pathways—chemistry, biology, engineering, physics, math or computer science—they want to focus on. As of right now, Sage plans to major in computer science, while Cohan is considering a combined computer science and math major.

Although they don’t plan on rooming together at Harvey Mudd, the boys are sure they will be in each other’s lives past high school.

“Aw, I’d second that,” Cohan said. “Knowing someone going in is definitely going to be good, so I’m really excited.”

How do you guys feel about continuing to run together for the next four years?

Cohan: It’s pretty exciting. I started as a total newbie who just wanted PE credits, but now I’m running in college for a D3 school. The funny thing, though, is that Adam and I kind of knew each other before I came to LAHS.

Sage: He was my weird stalker for a long time—

Cohan: You were my weird stalker.

Cohan: Like in fourth grade at the JCC pool. I ran into you. And then you did Taekwondo, or I did Taekwondo. You had your music lessons right after me.

Sage: Yeah, I just kept running into him.

How do you feel about your futures at Harvey Mudd?

Sage: It’s pretty great. Obviously we were really hoping to go together. We drove down—

Sage: We went a long time ago with some other kids to visit Harvey Mudd. Then, earlier this year, his family took a trip down to LA to interview and run with the team, and I went with them. It’s great because it means we both have an awesome safety net going into college, like someone in the community that we already know.

Do you know what the rooming situation is going to be at Harvey Mudd?

Sage: I am not going to room with you. That has already been decided.

Cohan: Okay, you’re the one that took all the covers on the overnight trips!

Sage: We’ve had some trial runs.

Cohan: For cross country, sometimes you have to share a bed. The first time we went down to Harvey Mudd, I took the couch. The most recent time, Adam took all the covers right when we went to sleep, and then I woke up in the middle of the night freezing cold. I took them back thinking that he was asleep, but he was awake and got kind of upset.

Sage: They warn against rooming with your friend because it never works out well.

Cohan: It’s also an opportunity to branch out and meet new people.

Sage: Yeah, for sure, it’s good to get to meet other people and also not ruin our friendship.