In the wake of Parkland, thousands of schools nationwide called on Congress and showed solidarity. 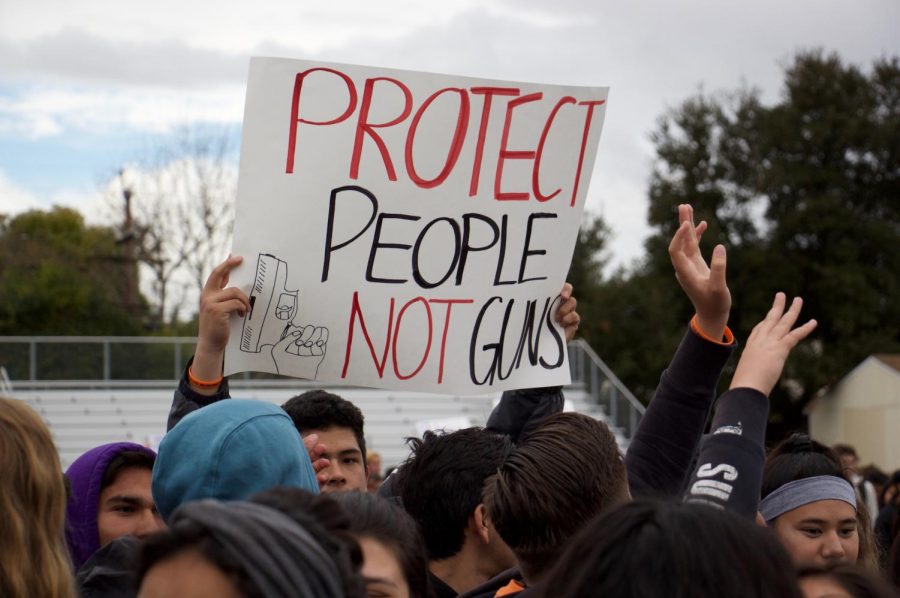 By Emma Kwan and Daphne Ih

Students this morning walked out to urge gun regulation in the wake of the Parkland school shooting, carrying signs, wearing wristbands and signing pre-written letters to California’s senators. Organizer junior Brynna Mitchner and senior Jia Seow called on students to pressure the government to act on gun violence in speeches, and organizer junior Reilly Dennedy read the names of the 17 Parkland victims.

The 17-minute protest, one of thousands staged by schools across the nation, intended to show solidarity with Parkland’s victims and pressure Congress into increasing regulations on guns after last month’s shooting. Many students there said they came to show solidarity with Parkland victims and emphasized the need for teenagers to use their voice to affect change given the opportunity.

“Parkland was serious, and it could’ve happened to us,” protester senior Sarah Cliff said. “This kind of thing keeps happening and nothing is happening. If millions of people [protest], it’s going to be resounding.”

“I thought a lot of people wouldn’t want to do it because they’d get an absence, so it was inspiring to see so many people come out to support the movement,” protester sophomore Ilona Lahdesmaki said.

The walkout started at 10 a.m. and continued into the quad after second period ended. After Brynna and Jia gave speeches, participants formed a heart shape at the center of the football field, where they held up signs and briefly chanted “enough is enough.” At brunch, junior Shawn Ridgway sang an adapted version of “Where Is The Love” by The Black Eyed Peas.

Students who helped plan the walkout and handed out wristbands and letters during the event said they thought the walkout went well. ASB helped organize the event.

“I’d been concerned that some people would take it as a joke, but no one took it as a joke and no one was disrespectful,” planner sophomore Mahita Bobba said.

Faculty and district staff attended the walkout for safety concerns, though some said they attended also to support participants and were proud of students using their voices. The District Teachers’ Association asked teachers to keep their students safe and make them feel included —  teachers could not participate because the protest occurred during their work hours and was political.

“Students did an amazing job with the walkout with a positive message in a respectfully done way,” Principal Wynne Satterwhite said. “I’m very proud of them.”

Some students questioned the efficacy of the march, asking whether it would create change. Junior Peter Coe said he thought the protest was valuable but that working to remove money from politics and decrease lobbies’ power was more important.

“The average person can’t pay $100,000 to politicians, and until we convey the message that money in politics is not okay by talking to Congress members, we won’t be able to change anything,” Peter said.

Others didn’t participate because they thought getting an unexcused absence for a 17-minute walkout wasn’t worth it.

“Maybe if it had been an hour I would’ve walked out,” senior Varun Sriram said.

Some students disagreed with the walkout’s aims. Senior Eitan Weiner, who believes that the Parkland shooting resulted from a failure to enforce existing laws and act on tips to the FBI, feels that gun control advocates are often uneducated and misunderstand how guns actually function, instead accepting falsehoods due to their emotional potency.

“Before you propose banning any specific type of weapon, research it,” Eitan said. “Just learn how it functions, what it is used for, talk to people who actually own them and just get a basic understanding for what their purpose is, because they do have purposes. I’m not asking you to be persuaded in any direction, just if you want to ban those types of weapons, just know their capabilities and their capacities and that’s basically the main thing.”

Looking forward, participants want the walkout’s momentum to continue and encourage teenagers to express their opinions.

“I hope it inspires people to raise their concerns more often and not shy away and know there’s a whole community behind them supporting them,” sophomore Jacky Ramirez said. “We have a voice, and we can use it. We’re powerful, we really are.”