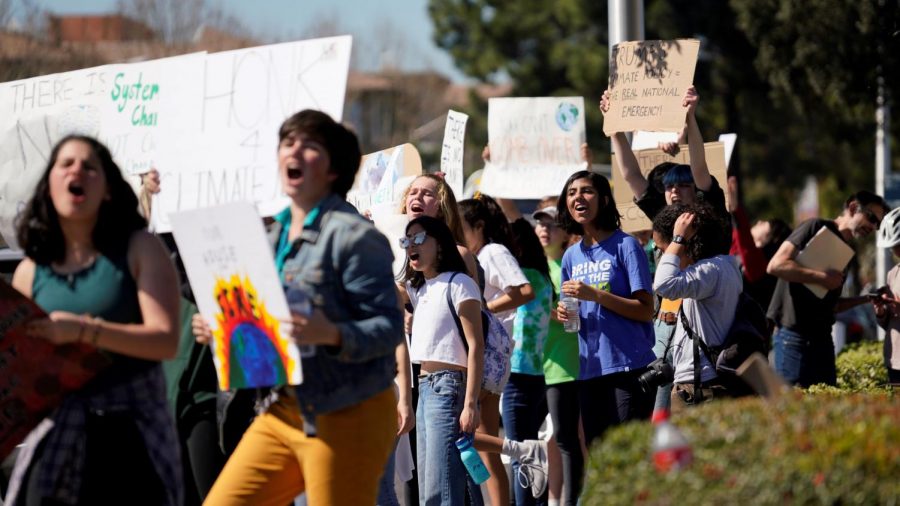 Students chant and hold signs as they walk to Wells Fargo in downtown Los Altos.

By Daniela Gloster and Anya Sharma

Los Altos students walked out of school from third to sixth period on Friday, March 15 to raise awareness about the urgency of climate change.

Los Altos marched in support of the international Fridays for Future movement, which centers around the concept that attending school doesn’t matter if the climate crisis isn’t addressed. Started by Swedish teenager Greta Thunberg in August 2018, Fridays for Future has spread to 125 countries and aims to raise awareness about climate change and encourage government action.

“Just hearing Greta’s speech to the UN was so powerful,” co-organizer senior Katelyn Moussavian said. “The way she

spoke was so factual and so real and that inspired us. If she’s sixteen years old and she’s doing this every Friday, why can’t we do this at least one Friday at Los Altos High School?”

During brunch, protesters gathered in the quad before marching to Wells Fargo on El Camino and San Antonio Road. The organizers chose Wells Fargo because of the bank’s role in financing the Dakota Access Pipeline, which pumps roughly 500,000 barrels of crude oil a day from North Dakota to Illinois. Many opposed its construction as the pipeline surrounded part of the Standing Rock Indian Reservation and leaks could contaminate the reservation’s only available water source.

While walking, students chanted “Climate change is not a lie, please don’t let our planet die” and “Climate justice” until they reached Wells Fargo. There, students and a few staff members continued chanting and held up signs on the street corner before assembling in the parking lot to listen to student and adult speakers. The speeches ranged from personal

“Nature is such a beautiful thing, and when you go out into it, you’re just instantly humbled by it,” Katie said. “I think that humans need to be more humbled by what’s around us.”

Junior Adam Hollingworth shared a similar sentiment, stressing that the environmental crisis should be at the forefront of national attention.

“Whether you’re black or white, you’re a man or a woman, you’re gay or straight, this is the biggest global humanitarian issue that we all face,” Adam said.

The six organizers, three of whom met through a shared history class, chose to walk out of school rather than protesting after school hours because they wanted to show that combating climate change was their main priority.

Protests have been used to send a message at Los Altos before: last year, students marched to show their support for Deferred Action for Childhood Arrivals (DACA) and advocated for stricter gun laws with a 17-minute walkout after the Parkland shooting.

“There are not a whole lot of options for how students can make waves,” dance and English teacher April Oliver said. “But I think a walkout is an option that people will pay attention to.”

Protesters hoped that walking out of school would demonstrate their prioritization of the environment over their personal education.

“Nothing is more important than young people thinking for themselves about the world,” history teacher Seth Donnelly said. “If that means missing a day school, then so be it. Ultimately, what’s the point of trying to climb a ladder in a house that’s burning down?”