Students, Teachers Must Have Open Discussions About Offensive Humor 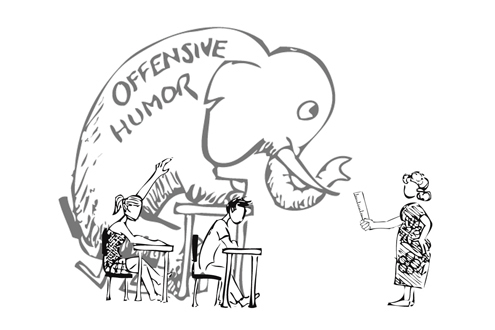 When marching band returned from its retreat earlier this month, most students were still thinking about the Skit Night jokes that had become so distasteful. Some were trying to keep the story hushed up, while others were unsure as to why the humor was so offensive in the first place.

However inappropriate the skits may have been, most students can relate to a situation when a joke inadvertently became offensive. The band camp incident serves as a reminder for the entire student body that from time to time, humor can quickly go from funny to inappropriate and that the line between the two territories is easy to miss.

Even though students often cross the line without malicious intent, those involved must have an open discussion when they do cross it.

Without addressing how the line was crossed and what specifically was offensive, it is impossible to move beyond that uncomfortable moment. Even if it might be uncomfortable to talk about, pretending that nothing wrong happened implicitly excuses the action, meaning that people will continue to act as they did. Those who cannot figure out what went wrong will not be able to act differently in the future.

Marching band has taken the right steps by bringing a motivational speaker to address the band students but needs to go farther in discussing the specific offenses of Skit Night. Moving on does not mean pretending that the issue never happened, although such pretense might be easier than tackling the underlying issues.

The school is the ideal environment to have safe conversations, and students and teachers need to work together and enable the involved parties to express their feelings and apologize if necessary.

Having open discussions about how certain words and humor might be offensive allows students to more clearly see the line that was crossed, even if it might be crossed again in the future. After all, the line is not always obvious. Rarely does it appear as an octagonal red sign with the word “STOP” printed across it.

As people, we all will offend others from time to time, even if we do so accidentally. Having a sense of where to stop can help ensure that we don’t cross the line. Discussing offensive humor is the only way to improve that sense for where to stop and subsequently minimize future offenses; simply ignoring it is not a viable option.