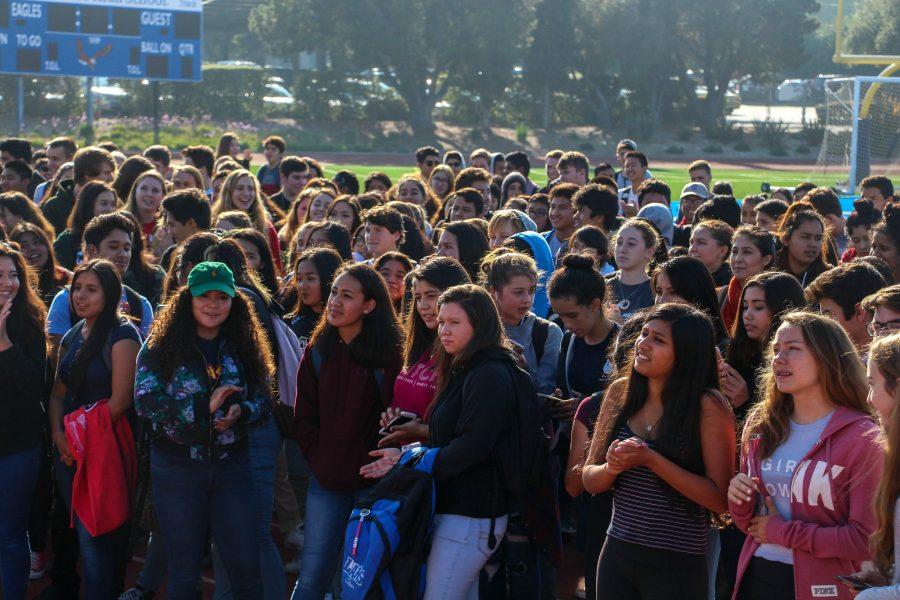 A walk-out in protest of president-elect Donald J. Trump came together yesterday, November 14, at 1:30 p.m. as a result of a social media post that had circulated sites like Facebook, Instagram and Twitter. Over 100 students gathered on the Los Altos football field, where lead protesters voiced their thoughts on the election from the bleachers. The protesters then marched down San Antonio and part-way down El Camino chanting anti-Trump and pro-inclusivity statements.

An image was passed around urging all students at schools across the bay to walk out of their classes at 1:30 p.m. in peaceful protest of Donald J. Trump’s victory in the presidential election, as well as in attempt to create an opportunity for those who felt disenfranchised to speak about their beliefs, concerns and stories.

“I think it was someone from another school, another district [who originally tweeted it], but it said ‘Attention all high school students: There’s going to be a walk out,’” senior Sophie Iannone said. “So [my friend and I] retweeted it, and from there it kind of just got started.”

While the protest was not spearheaded by any single person or group of people, a group of students took the lead. They spoke to students from the football field’s bleachers with a microphone in hand and held signs of various messages, including “love trumps hate” and “acceptance starts here.”

“We make friends, we make bonds, we don’t let anything break us apart,” senior Sean Adibi said in front of the protestors. “Regardless of who you want to vote for, we have to learn about why, we have to learn from each other. If we continue to build walls between each other, it only worsens America. This country was built on the foundations that all people are equal.”

Students discussed issues of xenophobia, racism, sexism and anti-LGBT discrimination, preaching inclusivity and empathy.  At first, students on the bleachers voiced their opinions on the issues they considered important. Then, they handed the microphone to a line of audience members who also wanted a chance to speak.

“After the election, do you know the texts that I received?” senior Miranda Lambert said in front of the protestors. “I have friends who are queer who are saying, ‘Dear God how did this happen?’ I have people sharing legal help so others can get documentation of their citizenship or residency, so they can stay. I have girls who talk about how they need to get IUDs real fast, because they don’t know if they’ll be able to afford pills in three months.”

Junior Jesus Membrillo, one of the eventual leaders of the walk-out, expressed his own fears for the Latino community.

“A lot of my friends are very scared because of what [Trump] says,” Jesus said. “For example he says a lot about how he’s going to deport a lot of Mexicans, and that involves many of my friends’ family members, relatives, friends, etc. That’s a scary thought and feeling to have.”

One student stood up during the walk-out and opposed the protest as alienating Trump supporters. After talking to a couple protestors, the student expressed surprise over the inclusivity of the walk-out.

“I’m not here necessarily to support Trump, but I think [the crowd is] protesting democracy,” the student said. “In other places, it’s like everybody hates each other at this point… Pro-Trump people are getting beat up and hated and all. I thought that’s what this was going to be, but I’m kind of impressed to be honest.”

Eventually, a student came to the front of the bleachers and yelled for the protest to move off campus. The crowd went to the front of the school, and from there, the protest took to San Antonio Road. At the intersection of San Antonio and El Camino, students paused to protest on each corners’ sidewalk. The protesters then turned right onto the El Camino sidewalk, chanting “hey ho, Donald Trump has got to go,” “not my president” and other slogans, and many cars honked in approval.

Principal Wynne Satterwhite and Assistant Principal Galen Rosenberg, along with other administrative staff, had followed students down San Antonio on golf carts. The administration mainly aimed to ensure student safety and had also contacted Los Altos police to do so.

“We need to make sure that [students are] safe and part of [why we came] is wanting to make sure nothing bad’s going to happen in a situation like that where it could,” Rosenberg said. “We also want students to know that we’re there for them, and I think students generally feel safer when there’s adult supervision around.”

But despite other motives for walking out, organizers were determined to have the protest taken seriously.

“If you did this to get out of class, people smiling and joking over there, it’s not funny, it’s a protest, alright?” a protestor said from the bleachers. “It’s annoying, it’s not funny, we’re here to protest, not here to joke around.”

The walk-out at Los Altos was one of hundreds across the country, occurring in cities from Los Angeles and Seattle to Miami and Baltimore.

“We’re not alone,” Cinthya said. “I know I felt alone for a really long time, but seeing all these people here, we have a lot of support. We just need to be nice to each other. We need to have compassion and empathy for everyone.”