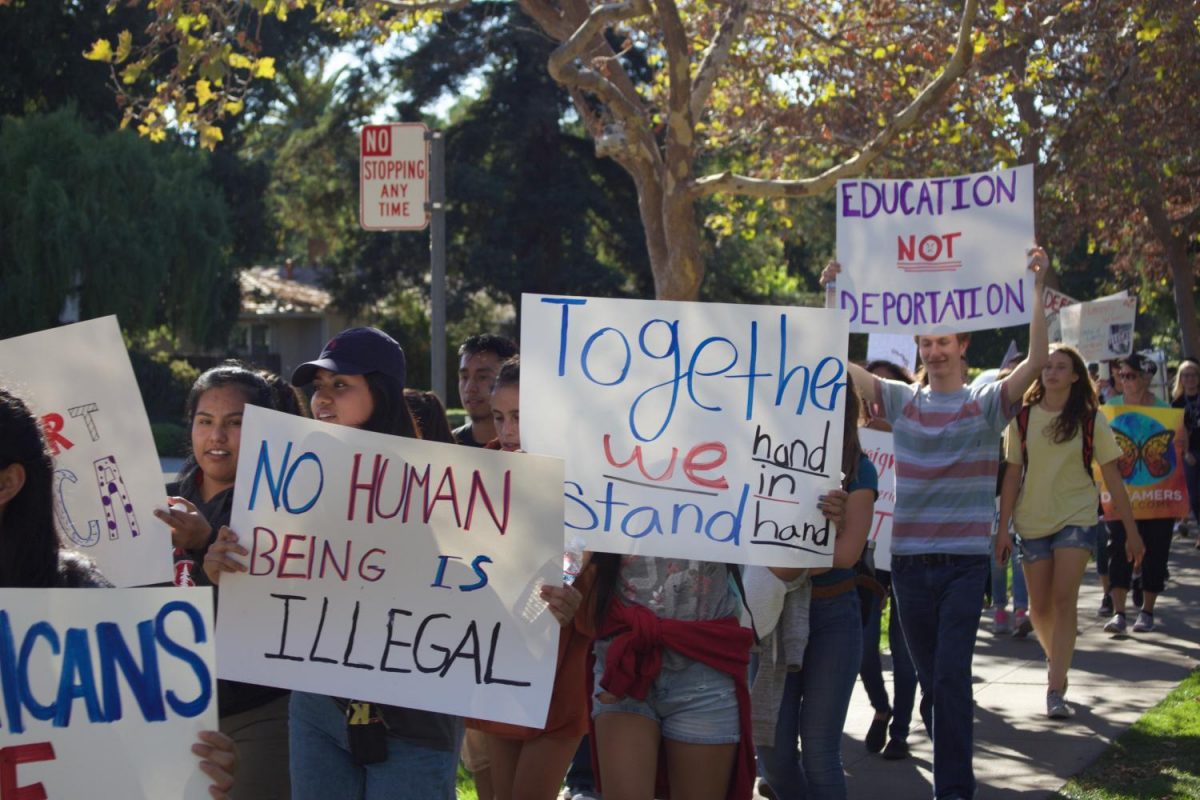 Students held signs and chanted as they marched to Eagle Park in Tuesday's protest of the DACA repeal.

Los Altos students and teachers chanted and paraded signs as they marched from campus to Eagle Park in Tuesday’s protest of changes to the Deferred Action for Childhood Arrivals (DACA) policy.

“[We want] our students to know they’re supported and we love them and we care about them,” Teachers In Solidarity member and P.E. teacher Kiernan Raffo said. “Immigrants are what makes this country what it is and this school what it is. DACA is something that Obama put in place to help our kids feel safe, and to take it away is a crime.”

Before the march, Haiti Solidarity Club adviser and history teacher Seth Donnelly addressed the crowd that gathered in the school quad, explaining his view of solidarity.

“Everybody is somebody, and we [need to] take that into our hearts and recognize that an injury to one is truly an injury to all,” Donnelly said to the protesters. “Our country, our world, is in crisis, [and] we should constantly be coming together and building this circle.”

Teachers In Solidarity member and history teacher Sarah Carlson hoped immigrants would realize that the local community and school stand in unity behind affected students to fight for their rights.

At the park, event leaders spoke to marchers about their own experiences as immigrants and their opinions on equality. Many speakers, including Social Injustice Club President sophomore Jacky Ramirez, mentioned the numerous opportunities DACA had given them and criticized Trump’s decision.

In his speech, Teachers In Solidarity member and English teacher Jonathan Kwan asked listeners to consider the future direction of society under the current government.

“What kind of world do we want [our] children to inherit?” Kwan said. “Not only are our immigrant communities under attack, but our core values of diversity, empathy and compassion are also under siege.”

Kwan emphasized the need for everyone to take action.

“To witness this erosion of human decency and dignity, we must speak out,” Kwan said. “We need your support, we need your advocacy. This is not a brown issue, a black issue or an immigrant issue — this is an American issue.”