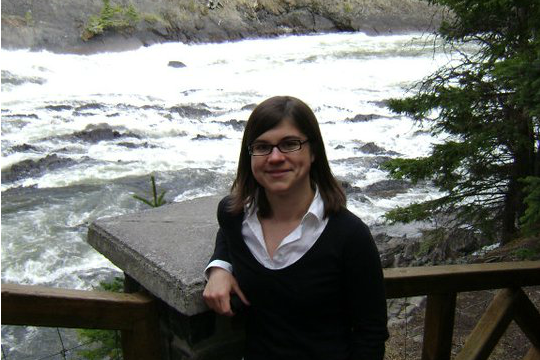 Even when Sara Knox was in high school, she knew she was interested in several areas in science and that she was drawn to the world outdoors. Her career journey reflects both of these interests, dynamically combining several science fields into a profession that melds data collection and interpretation with a strong environmental influence. After completing her Ph.D. in biometeorology, the study of the impact of climate on ecosystems, last May, Knox now works at the United States Geological Survey (USGS) in Menlo Park.

Directly after Knox graduated high school, she wasn’t sure which fields of science she wanted to explore. Taking a diverse array of science classes like marine science, earth science and geography, led to her interest in climate change and the carbon cycle coming into focus.

“What really piqued my interest was environmental sciences… which combined my interest of the natural world, the outdoors [and] earth system science,” Knox said. “I didn’t know too much [about] what I was getting into, but it sounded really neat. So I started my undergrad in Earth System Science.”

Knox’s undergraduate experience involved exploring several research opportunities that brought her from the sub-arctic, where she studied the peatlands (marshy regions that include bogs and wetlands) to Peru, where Knox studied the impacts of receding glaciers.

“I thought research was really cool so I decided to do a Masters, and then just kept going to do a Ph.D.,” Knox said. “But I didn’t know coming right out of high school what it [was] I wanted to do.”

Her Ph.D. studies explored the realm of biometeorology, which involves the confluence of the atmosphere and biosphere, along with climate change science. Her research entailed collecting and interpreting data about freshwater wetlands and the impacts of wetland restoration. The research that Knox conducted played a role in influencing California’s wetland policy.

“One of the things I like about environmental science is that you’re studying something academic, but… it directly ties into people’s lives and policy,” Knox said. “It’s a very applied science… It’s great to just push science for the sake of science, but I think being able to apply it is really interesting and really relevant, and I think that guides my work.”

The work that Knox does currently with the USGS also plays a definite role in reducing the carbon dioxide emissions that companies produce.

“We’re trying to tie [the research] into climate policy,” Knox said. “We [are] developing a protocol that people can actually use. So let’s say you’re a company, and you have certain emissions… but under California’s Cap-and-Trade [Program], you have to try and reduce your emissions… You need people like us and our work to try to actually quantify… the overall greenhouse gas benefit of this restored wetland… We provide the science so that policy makers can interface with the companies themselves.”

Knox started her work at the USGS only a few months after completing her Ph.D. She was drawn to the agency because of the opportunity to pursue her interest of working with tidal wetlands. The emphasis on research and fieldwork appeals to her as well, which involves frequent data collection in the wetlands of the Sacramento-San Joaquin Delta region and tidal areas.

“We’re out there every week, or every other week,” Knox said. “There [are] a lot of challenges with making sure your sites are functioning, fixing breaks, being patient, being meticulous when looking at the data when it comes in and making sure the sensors are working properly. Being organized is really important.”

As for her talk during STEM week, Knox plans to focus on the importance of wetland restoration, with particular attention to its impacts on climate change. For students interested in STEM, Knox suggests learning as much as possible by taking several science classes. Learning these basics can open up new interests, just as it did for Knox.

“There’s such a vast array of things to study in science,” Knox said. “I think one thing that I learned as an undergraduate was that there’s so much more than your traditional chemistry, math and physics… I didn’t even know what [biometeorology] was when I was 18, but it’s something that I learned through college and was really interesting because it pulled together elementary physics, chemistry and math [with earth science]”.