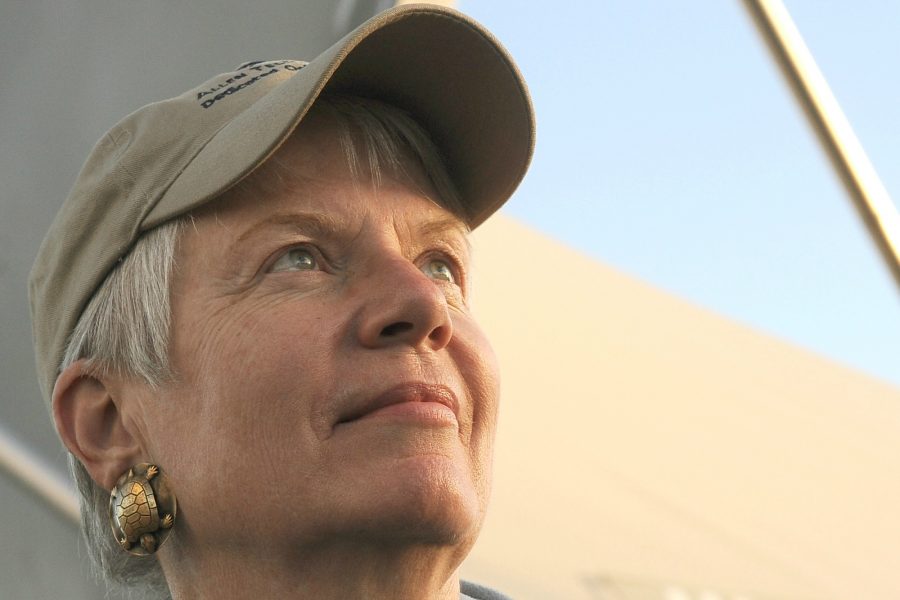 Jill Tarter is, to be extremely colloquial, an alien hunter. She is also one of Time Magazine’s Top 25 Most Influential People in Space, recipient of two public service medals from NASA (among an impressive array of other honors) and a retired astrobiologist who has devoted her career to the search for extraterrestrial life, technological civilizations beyond Earth. For Tarter, studying the decades-old enigma of whether we are alone in this universe has led to a more profound philosophical realization.

Tarter was the previous director of Search for Extraterrestrial Intelligence (SETI) and currently holds the Bernard M. Oliver Chair for SETI Research. Her career and journey to SETI began as a graduate student at UC Berkeley, when she had an internship in programming the predecessor to the modern day desktop computer, PDP-8. Tarter describes it as a “lucky accident” — the now-obsolete computer was given to astronomer Stuart Bowyer, who recruited Tarter to work on SETI. The foundation for SETI was based upon an engineering report called Project Cyclops, which proposed the coordination of many radio telescopes in the search for radio signals that might be E.T. phoning home.

“Stuart Bowyer gave me [the Project Cyclops report] as kind of recruiting document, and I read it from cover to cover,” Tarter said. “I was so entranced by it. I got hooked. I decided I couldn’t imagine spending my career doing anything more impactful… and I have stayed hooked ever since.”

Today, SETI utilizes a large array of radio telescopes to look for optical flashes and other unnatural radio waves that might have been emitted by technologically advanced life forms elsewhere in the galaxy. Much of it is based upon Project Cyclops, but much of it is the product of cutting-edge technology and many modern scientific minds. The scientific aspect of SETI blends chemistry, biology and physics into one multifaceted effort.

The significance of SETI lies on the border between scientific and philosophical. Technological civilizations, which are essentially civilizations advanced enough to build radio transmitters, are generally incredibly short-lived relative to our 14-billion year old universe; even Earth is merely a blink of an eye in this broad timeline. Thus, it is practically impossible that two technological civilizations will ever be in a close enough proximity in terms of both distance and time for one to detect the other’s existence.

“If we do succeed in detecting a signal… we are justified in inferring that, on average, technological civilizations last for a long time,” Tarter said. “Otherwise we would never have been successful in detecting the signal. And if, on average, technological civilizations last a long time, that means that we can look forward to a long future. And that’s a very profound philosophical statement and a rather complex chain of argumentation.”

Throughout Tarter’s illustrious career as a scientist, she has discovered a more philosophical purpose to the science and nitty- gritty math that might compose SETI’s work and analysis. This purpose ventures far beyond the realm of scientific discovery — Tarter emphasizes the importance of a cosmic perspective that inspires altruism and interpersonal harmony worldwide.

“All humans on this planet are essentially the same when compared to other technological civilizations out there that evolved independently,” Tarter said. “SETI has the ability to foster a perspective that takes in the whole planet and trivializes the differences among humans — differences that, frankly, we’re willing to kill one another over. We are humans on one planet… [We should] not think of ourselves as Americans or Europeans or whatever else; we need to think of ourselves as humans.”

This perspective, Tarter says, has changed the way she sees the world. Exploring the bounds of our universe and operating on the scale of hundreds of thousands of lightyears renders inconsequential quibbles insignificant in the broad scope of things.

“The planetary environment has very much shaped life as we know it, and over time, life as we know it has hugely altered the planet,” Tarter said. “If you begin to think about… great space and the potential for life as we absolutely don’t know it, then the argument you’re having with your neighbor doesn’t seem so important.”