Sorting Out the Flaws of a Garbage System 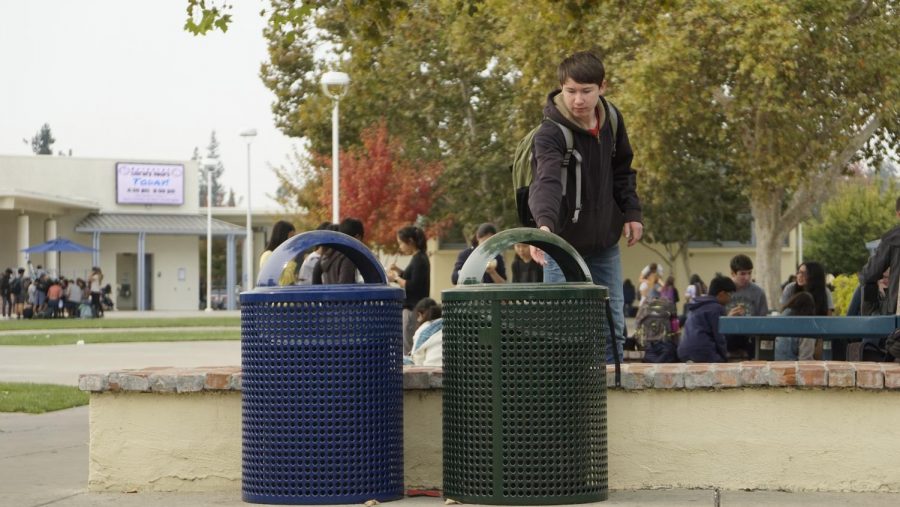 Junior Nathan MacLeod throws away his lunch in the green compost bin in the quad. Due to sorting issues, compost was contaminated to the point that Recology, the company Los Altos partners with for trash, refused to pick it up. Kylie Akiyama.

By Nathan Godderis and Ian Tseng

At a pickup in the beginning of October, Recology’s garbage trucks refused to collect the waste at Los Altos because students’ poor sorting had contaminated the compost with recyclables.

“The compost has to be pure — it cannot be more than 10 percent contaminated,” Green Team Co-President senior Sarah Chang said. “Beyond that, it will just be thrown into the trash.”

Recology is a company that is committed to green recycling and composting. When they don’t pick up Los Altos’ compost, it all ends up in a landfill. This allows food to break down and release methane into the atmosphere, creating greenhouse gas effects stronger than carbon dioxide. Normally, Recology transports recyclables to the Shoreway Environmental Center and compost to a commercial compost facility to be converted to soil.

But the Green Team is also hindered by the lack of proper labeling on non-colored bins, which keeps students from correctly disposing their waste. More importantly, the lack of sorting or labeling forces custodians to guess as to whether each bag has more compost or recycling. To do this, custodians resort to weighing and examining similar-looking trash bags from each type of bin to make educated guesses as to which dumpster to place them in. The components of the trash bags are so similar due to sorting issues that custodians are often forced to combine the two.

“It’s not perfect because compost and recycling are mixed up all the time,” custodian Martin Acosta said. “In the recycle bins something like 15 to 20 percent of it is compost. So we have no choice but to throw it into the recycling bin.”

Meanwhile, AP Environmental Science teacher and Green Team adviser Greg Stoehr has decided to invest in improving student compost by purchasing an educational composter. This composter will be pushed around the campus on wheels, demonstrating how food scraps are eventually converted into useful soil.

“[We will] put food scraps into one side, and the other side will be composting while you fill it up,” Stoehr said. “We’ll have two going at the same time, so students can see the compost process while they’re actually throwing in their peels.”

Even with all these efforts to improve the garbage system, there is still a lack of guidance and education for the student body, leading them to make poor choices when throwing away trash.

“We’re hoping to do more education-like videos, and letting people know how to throw away their trash,” Green Team Co-President junior Anya Gupta said, “But a lot of it just comes down to people being lazy and using whatever trash can is closest to them, so changing that mindset can be hard sometimes.”

While the Green Team and administration pursue their efforts to improve the garbage system, the student body can also contribute by properly sorting their waste using the twin-bin system in the quad. As a result, the custodians will have an easier time differentiating between their bags, and the administration would be a step closer to spreading the system out across campus.

“Since the federal government is not doing its part to reduce CO2 and other harmful emissions, we have to make sure we are doing all we can at the local level,” PTSA Go Green Sustainability Committee Founder Sybil Cramer said. “I know that Los Altos students want to do the right thing — especially when they know their actions make a difference.”