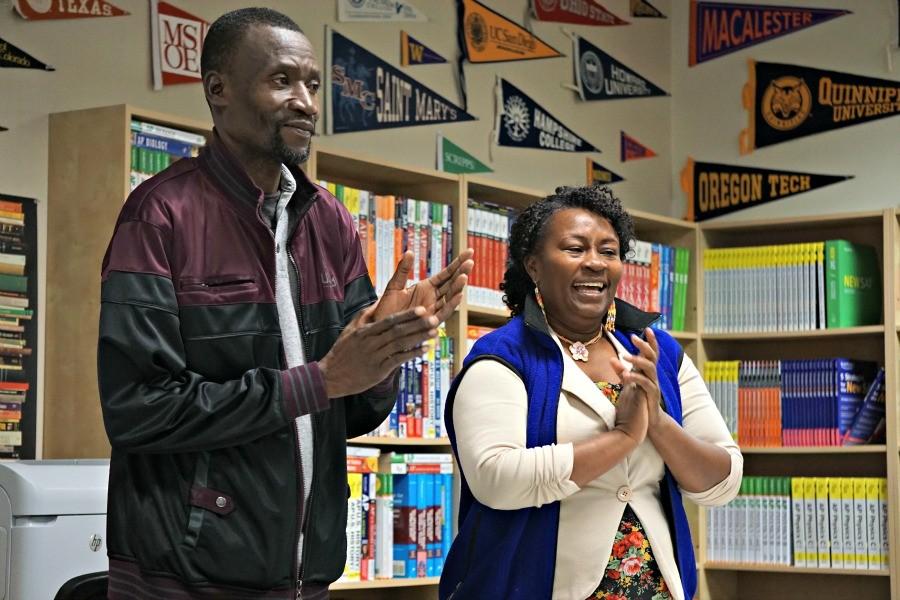 Society of Province United for Economic Development of Petion ville (SOPUDEP) leader Madam Réa Dol and her husband Bataille Dol at their presentation in the college career center on Wednesday, December 2. SOPUDEP aims to provide Haitian people in need with education and programs to aid the community economically. Photo by Allegra Maeso.

By Chris Dadok and Savita Govind

The Society of Province United for Economic Development of Petion Ville, better known as SOPUDEP, is an organization founded in Port-au-Prince, Haiti. SOPUDEP’s principle focus is to provide education for poor children, and create programs to help economically grow the community.

The leader of SOPUDEP is Madam Réa Dol, who has worked with the Haitian community for years. SOPUDEP was formed in 2001 to combat the lack of education and poverty in Haiti and overcome social barriers. In the 2010 earthquake, SOPUDEP was thrust into the fray and struggled to keep up with the tumultuous problems that followed in the quake.

SOPUDEP has worked toward improving the education of areas in poverty by providing free education to 80 percent of kindergarten through 12th grade schools and initiating a scholarship program for high school graduates in fields such as engineering and medicine.

This assistance is imperative to the Haitians because around 78 percent of the population lives in poverty. In order to combat the vicious cycle of hardship, education and support need to be given to the Haitian people. SOPUDEP was one of the many organizations that stepped into help, even before the 2010 earthquake happened.

In addition to education, SOPUDEP has created a mobile clinic to provide additional health services to those who can’t access it. With volunteer doctors and nurses, the clinic offers vital medications to the population.

History teacher Seth Donnelly, who is the advisor for Haiti Solidarity Club, was involved in SOPUDEP before the Haiti Club was started. Seth has been going there since the early 2000s and has become extremely invested in Haiti. From donating money and supplies firsthand in Haiti to managing a garden to helping support donations, he has truly gone above and beyond to aid SOPUDEP in its fight for a better Haiti.

“I got connected to SOPUDEP because I was in a small human rights delegation and met Réa who was also heavily involved in Haitian human rights,” Donnelly said.

After he began to become heavily invested in SOPUDEP he and a student created the Haiti Club as an instrument to aid SOPUDEP. Every year in April students travel to Haiti in order to help create change with SOPUDEP.

“SOPUDEP is special because it raises the awareness level about what our fellow humans are going through not only in Haiti but in many different places around the world, therefore it raises empathy in us,” Donnelly said. “It also raises the bar for us because we see how much people like Réa and SOPUDEP students are accomplishing under such difficult circumstances.”

SOPUDEP has gained international recognition, being featured in the New York Times by Nicholas Kristof, a Pulitzer prize winning journalist.
“Google has said that whatever we raise and donate, it will match,” Donnelly said. “If Google matches our $40,000 donation, it will turn into $80,000, which would cover teachers salaries for over a year and a half.”

SOPUDEP has spread to college campuses from Stanford to the University of Colorado, with more students and young volunteers traveling to SOPUDEP’s school in Haiti. Even with numerous multi-million dollar NGO’s in the country, corruption is still present in Haiti which causes a major problem for SOPUDEP.

“There have been multiple recorded instances of fraud,” Donnelly said. “They changed a lot of the voting stations, and if you didn’t have the internet then, and since most people don’t have Internet, they had no idea where they were supposed to vote. Ballots were being switched out, which was exposed to the media, which has not been covered over here as much.”

The widespread corruption in the country hinders SOPUDEP’s ability to rebuild Haiti from the ground up. When these elections are rigged, the leader will not properly represent the population.

“They let a new guy to become president, but [the general population] never knew about him before, he just came in two months before the election,” Dol said.

The Haiti Solidarity Club, which takes an annual trip to Haiti to support SOPUDEP, has several expectations for its next trip which will be in April during spring break. While SOPUDEP has already expanded significantly, educating about 900 students K-12, the organization still has many goals looking forward, which include constructing a fourth floor in its new school building.