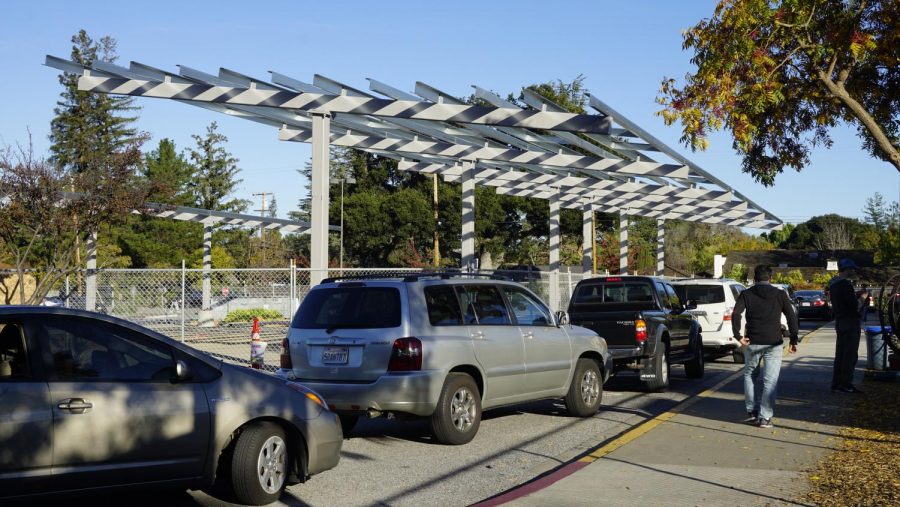 The foundation for solar panels stand as parents pick up students at Almond Elementary. The panels are expected to decrease carbon dioxide emissions by 3.5 million pounds per year and account for 90 percent of the district's energy needs. Kylie Akiyama.

Following in the footsteps of LAHS, all LASD schools will have overhead parking lot solar panels installed, except Oak Elementary will have them above the lunch and play area. The project started on Monday, October 25, and the school district hopes to finish before Sunday, December 31, to take full advantage of the grandfathered PG&E rates that will end in 2027.

The solar panels will decrease carbon dioxide emissions by 3.5 million pounds per year and account for 90 percent of the district’s needs, LASD Assistant Superintendent of Business Services Randall Kenyon said.

The arrangement resulted from a purchase power agreement with solar leasing firm ForeFront in which the firm will construct the panels and lease them to the district for 20 years, with options for the district to buy out the lease after 5, 10 or 15 years or at the end of the contract. The district will start off saving around $200,000 annually, only paying around $396,000 a year compared to the previous $600,000, eventually amounting to saving $2.7 million after 10 years.

“One of the things we are thinking about is buying it out after five years,” Kenyon said. “That hasn’t been decided yet, but that’s going to be my recommendation to the board. The sooner we buy out the solar panels, the sooner we get full savings on utility costs.”

The funding for this project will not come from the $150 million given to the school district in bonds for project funding by Measure N, which entail improvements in school facilities. Instead it will be paid for through the general operating budget given to the district. Money saved by the solar panels will be redirected to other other places in the school district leading to smaller class sizes, better facilities and more classes.

While the solar panels are being installed, most of the parking lot space at the schools is fenced off, causing teachers to have to find alternative ways to get to school. The district suggests they walk, bike, carpool or rideshare to school. Some teachers at Egan expressed annoyance that parking had been blocked off since the beginning of the whole project, even though the schools were being worked on three at a time.

“It would be better if they’d actually started work when they blocked off the parking lot,” Egan music teacher Anne Spector. “The parking lot has been blocked off for a long time now, and the work has barely started. That was a little frustrating.”

Egan English teacher Lisa Waxman said the project was “a great move in the right direction” and would benefit the school by generating extra revenue.

“I am really glad they are doing that because schools are generally the last to improve things like that,” Waxman said.