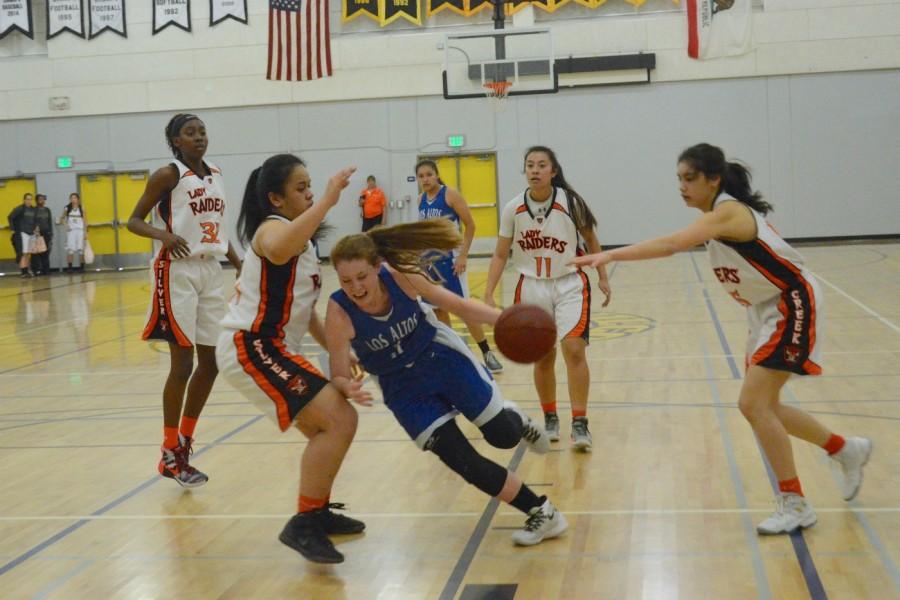 Senior Meg Entoven’s fridge always contains at least 100 eggs, four gallons of milk and enough energy bars to power a small star. This is because her family is a family of athletes, of competition and of height.

It’s natural that she’s drawn to basketball — her mother played for Stanford in college and won the NCAA championship in 1992. Meg joined her first club team in sixth grade and fell in love with the intensity of the game.

“I love the competitiveness,” Meg said. “I’m lucky enough to play at a high level of competition.”

A varsity starter for four years, the senior has found her own award-winning success in her athletic career at the school, as the recipient of an All-League First Team award and last year’s MVP. She’s also won numerous tournaments with her club team, Palo Alto Midnight.

After qualifying for CCS this year, Meg and her fellow Eagles suffered a tough loss to Silver Creek on February 27. But the achievements of her final season are a testament to the work and energy she’s put into her years of basketball: she’s scored 173 points and leads her team in steals, rebounds and blocks.

But for Meg, individual statistics are less important than the unity between herself and her fellow athletes.

“I have always loved the team aspect of [basketball] and having to work together with my teammates to play well,” Meg said. “It’s very rewarding to share the victories we have together.”

Meg’s team is particularly tight-knit. For her, a key element to a strong team is its camaraderie and ability to support one another.

“We’re all very close, and we do a lot to make sure that we’ve bonded off the court,” Meg said. “We go to team lunches a lot, and do other activities like team movies, secret Santa, secret snack buddies and team dance circles before every game.”
Her relationships with her school teammates will continue to be a key aspect of her athletic career, long beyond her final senior game.

“After playing with these girls for a long time I definitely feel very close to all of them,” Meg said. “I always know they have my back on and off the court.”