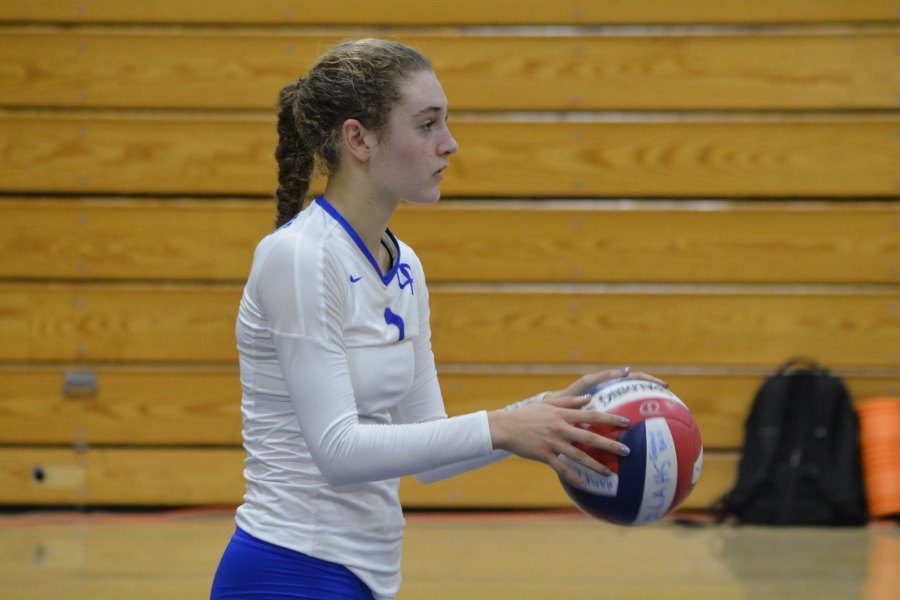 For this year’s girls volleyball team, success comes from more than cooperation and the individual skill. It comes from passion and strong leadership — everything that senior Kate Carlson possesses. For the past four years, Kate has been playing volleyball for Los Altos, moving up the ranks of the team and eventually cementing her spot as a setter and team captain in her senior year. After a strong season last year, the varsity girls volleyball team graduated many of their strongest players, which gave Kate the chance to step up as a leader within the new team.

“I’m pretty good at the administrative stuff,” Kate said. “Making sure people are where they are supposed to be and playing their role, that’s something I’ve just always been good at.”

Kate began her volleyball career in 7th grade at Egan Junior High School. She decided to follow the footsteps of her older sister, who played as well, in hopes to further her competitive spirit.

“I wanted to prove I was a better athlete,” Kate said. “I tried out in 7th grade, I made it and I decided I loved it.”

With many roles on the team, Kate’s main job as setter is a position that comes with a lot of responsibility. From the beginning to the end of the game, setters are expected to keep the players in order and create scoring chances.

Because she’s leading a young team, Kate’s captain role is more focused on keeping the structure of the team, rather than motivating. For her, maintaining team chemistry is important, especially in a changing lineup.

“Teaching a young team is hard. We’re still trying to teach them old varsity traditions, like warm up and pre-game things, so having older players is important,” Kate said.

As a varsity athlete, Kate still works on improving her game. For her, it’s not being better than her opposition that motivates her, it’s competition within the team.

“I personally am more competitive with the people I play with than with the other team,” Kate said. “Which is not always ideal, but in situations like that it’s good because you always want to beat the best, we try to make ourselves better in that way.”

For Kate, it wasn’t game time that helped her improve — rather, it was patience that shaped her into the player she is today.

“I had to learn the importance of sitting on the bench for sure, watching other people,” Kate said. “I did that freshman year and junior year, I was benched almost the entire time. Learning patience, paying your dues and being diligent is super important, and I had to get through that.”