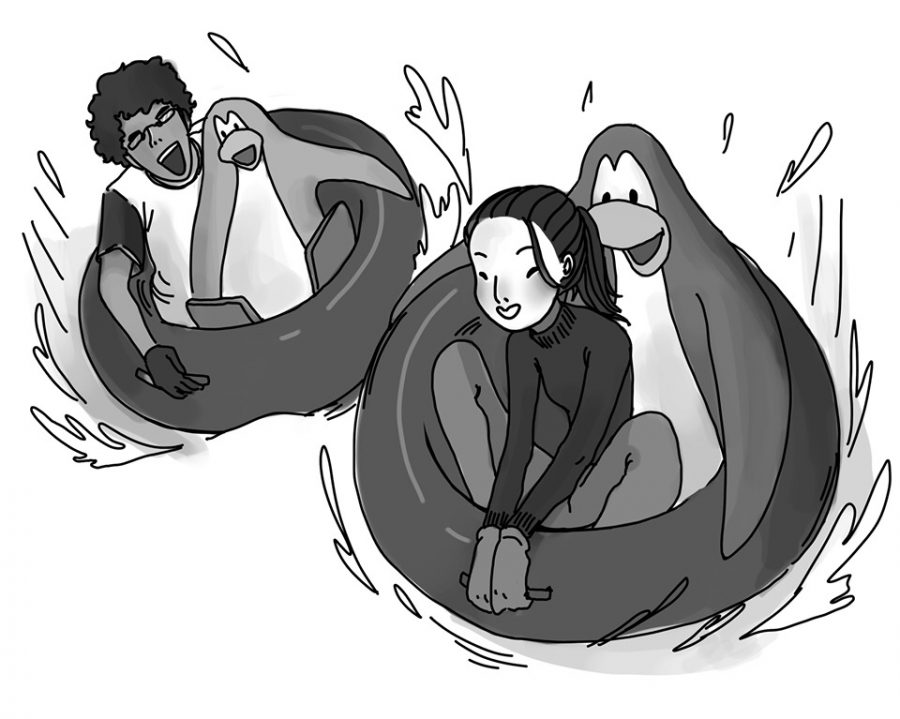 By Madison Woo and Brian Huebner

On Thursday, March 29, an iceberg will sink, a dance studio will close and a lighthouse will no longer shine as the online world of Club Penguin will close. The termination of this virtual world has struck sadness among many adolescents who grew up playing this game.

Madison’s Story
It would be an exaggeration to say that Club Penguin has been with me forever. I stopped playing when I reached third grade (and traitorously moved to Webkinz World) but it has always been a constant presence in my life, providing me with comfort as though to say that while the rest of my life continues to change, I can always return to an online pizza studio and make a sardine pizza for another online penguin.

Club Penguin has impacted my relationship with my family. My brother is one of the closest people to me today, but it wasn’t always like that. As children we often fought: my earliest memories were crying to my parents about my perceived injustices at the hands of my brother. In elementary school, we had nothing in common, and it seemed as if nothing could bring us together. Board games never worked because I always cried when I lost. We both hated sports and we were too young to listen to music or talk about social media.
When Club Penguin first became popular, I was in first grade and he was in fourth. After begging my parents for an account, my brother finally was able to attain one, spending his single precious hour on the computer unlocking virtual games and becoming a secret agent. I watched him daily, spiteful of his access to this imaginary world. Eventually, my parents caved and allowed me to have my own purple penguin, and I was left to decipher the mystical virtual world of Club Penguin.

I had never played a video game before then. My tiny first grade brain simply could not figure out how my brother managed to flawlessly use his penguin to play advanced jet pack games or play with those cute puffy balls that were called puffles. After two days of achieving nothing, I forced myself to admit defeat and ask him for help. To my surprise, he was willing, partly because this meant he was able to spend a few extra minutes playing the game. With great patience he taught me how to control my purple avatar. Unintentionally, we grew closer and closer — the hour long bus rides to school became more interesting as we talked about what color we were going to customize his penguin, or whether playing the jetpack would truly maximize the amount of coins we needed to buy another red puffle pet.

When he grew older and became disinterested in the game, I was left alone again in the penguin world. Despite being on opposite sides of the country, we still maintain a close bond today, notifying one another about our daily lives and even anticipating the days we can see each other and eat banana splits together. The creators of Club Penguin most likely had not intended it for two siblings to cement their relationship but now, in partial thanks to them, I can say that my brother is one of the most important people in my life, even if he doesn’t play Club Penguin anymore.

When I was in elementary school I was a shy, chubby kid. I had a hard time making friends. While other kids could almost effortlessly talk to other kids in class and make a connection in an instant, the thought of me just talking to someone brought knots into my stomach. Anytime someone tried talking to me, my anxiety got the better of me and left me unable to form coherent sentences.

Club Penguin was my solace. When I first started playing, the game seemed extremely odd to me. I didn’t really get the point of it. See, I was used to single-player games, and the idea of interacting online seemed odd at first. Soon, however, I found joy in these digital interactions. I remember on one of the first days I started playing, I waddled over to the mountain, where a group of penguins were sitting by the sledding mini-game, and as I waddled up to them, they asked if I wanted to play. My heart instantly raced at the thought of this. They wanted me to play with them? Out of everybody here? I quickly typed out a response to them, got on a sled and played to my heart’s content. The four of us penguins played multiple rounds with each other, the most intense sledding of my life.

From digital sledding, a real friendship stemmed. While in real life I felt like an awkward outcast who couldn’t even make conversation, in Club Penguin, I was completely different. I didn’t worry about what others might think of me. I never had the anxiety-ridden stutters, the awkward long pauses, the pressure of everyone’s eyes on me. Instead, I had a black penguin named “Blazicen2” to represent me.

Eventually, I grew out of Club Penguin and went on to play other games, but the game will always have a special place in my heart. It was there on my worst days and on my best days. It was there when I was unable to even speak a word at school, and allowed me to chat with new penguins almost effortlessly. It helped me learn social skills, things to say, things to chat about, and most importantly of all, it helped me make new friends at school — friends who also played Club Penguin — my first, real group of friends at school, friends who became important people in my life — people I still text to this day. Club Penguin is more than just a silly game made for kids. It helped shaped me into the person I am today.