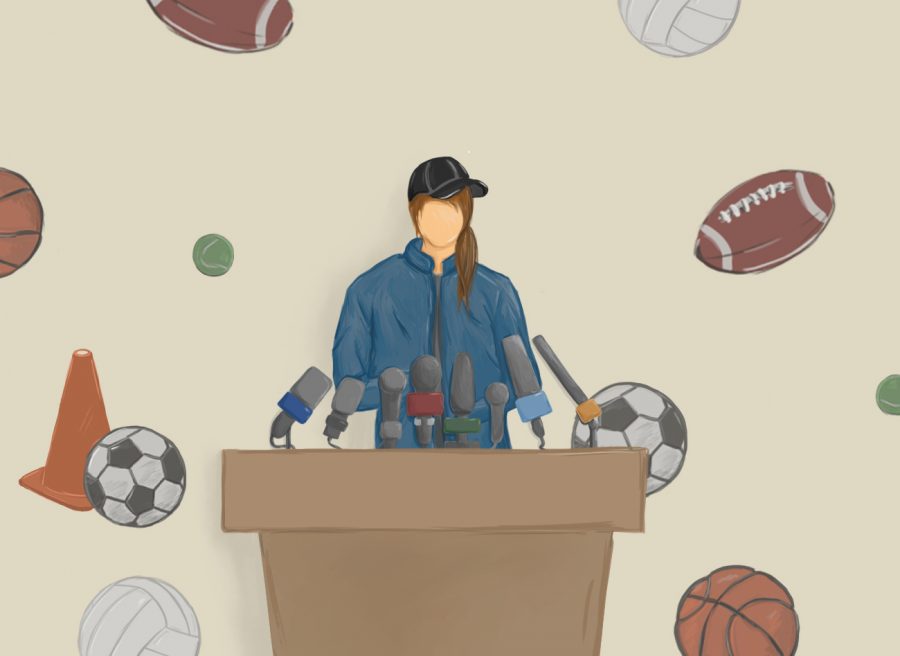 Simone Biles and Naomi Osaka have both begun the process of putting their mental health over the next medal and it is the necessary move for all athletes.

The shriek of the whistle cuts through the air. The cheers of the parents are drowned out by the constant, loud splash of limbs against the water as each team is trying to be the first one to reach the ball floating halfway across the pool. I can feel the blood rushing to my legs as I desperately try to stay afloat. There is pool water everywhere, in my eyes and mouth, and suddenly it feels as if I can’t breathe. The pool, normally too big, suddenly feels so small, and I need to get out.

I played water polo my freshman year, and I never thought twice about the sudden anxious feeling in the pit of my stomach whenever I walked onto the pool deck, or the urge to prolong everything to avoid getting into the pool. But now, as professional athletes like gymnast Simone Biles and tennis player Naomi Osaka are starting to be more open about their own personal struggles with mental health, looking back on that season, I realize that my relationship with water polo was not healthy.

It has been overlooked for far too long, but the mental health of athletes is important, and with stars like Biles and Osaka taking this step back from sports for themselves, it has finally gained the spotlight it deserves, albeit with undeserved backlash.

As the headlines told us all this past summer, Biles publicly announced her withdrawal from the USA Olympic gymnastics team as they battled for the gold medal in the Tokyo Olympics. During her aerial routines, she experienced what is called “the twisties” — a sudden lack of spatial awareness that is terrifying in the context of her routine. As a result, she took a step back from the competition to focus on her mental wellbeing, and rather than be met with support, she was instantaneously labeled a quitter.

And she wasn’t the only one. Osaka withdrew from the French Open after being fined for skipping a press conference that she said caused her much mental anguish. She was told that if she continued to miss these interviews, she risked suspension or even disqualification from the tournament, and in one of these press conferences, she began to tear up, giving the world a glimpse into her battle with depression.

In the end, it boils down to the immense pressure athletes experience. In an interview with The New York Times, Osaka explained how rather than feeling happy after a win, she feels relief, but when she loses, she feels an intense sadness she describes as “not normal.”

As fans, we put so much stake in our team’s victory. We laugh when our team wins and cry when they lose. We put these athletes up on pedestals for living the best life possible. After all, why wouldn’t they? They spend every day playing the sport they love in front of millions, earning millions. Some might even call it the height of success.

I put so much pressure on myself to be perfect at a sport that I had never really played before. Sure, I had participated in a two-week summer intensive camp, but I was literally dipping my toes into new waters and I didn’t allow myself the space to adapt or even quit.

And that is why, as a student athlete, the actions of those like Biles and Osaka are groundbreaking because it opens the door to the topic of athletes’ mental health and encourages other athletes to do the same. They are setting the example for the younger generation of athletes that it is okay to be vulnerable, that it is okay to not be okay (as cheesy as that sounds), and they are doing this on a global stage where they could have faced major consequences for prioritizing themselves. They are moving away from the idea of “toughing it out” that has plagued the sports community for so long and instead asking for help.

I so often write off any feelings of exhaustion or anxiety during the season as not being conditioned enough, not being good enough. During water polo, I used the anxiousness I felt whenever I stepped onto the pool deck as an excuse to push myself even further, because in my mind quitting was the worst thing I could have done. But now that Biles and Osaka and so many others have taken this step toward normalizing mental health, I am starting to realize that being an athlete means taking care of both your physical and mental health, even if that means “quitting.”

Athletes, by nature, define success to be winning it all, myself included. After all, what’s the point if you aren’t winning? But this idea of doing whatever it takes to win and only then can you label yourself as “tough” is so toxic because it encourages the mentality that it’s okay to sacrifice yourself to meet your end goals.

Rather, this new definition of toughness, as described by Biles and Osaka, should be the ability to stomach the idea of not winning and to know when to prioritize yourself, even if that means not being as successful as you might have been had you not taken a step back.

Biles and Osaka and so many others are redefining what it means to be tough, and that is worth more than any win in my eyes.