Should students be forced to attend challenge day? 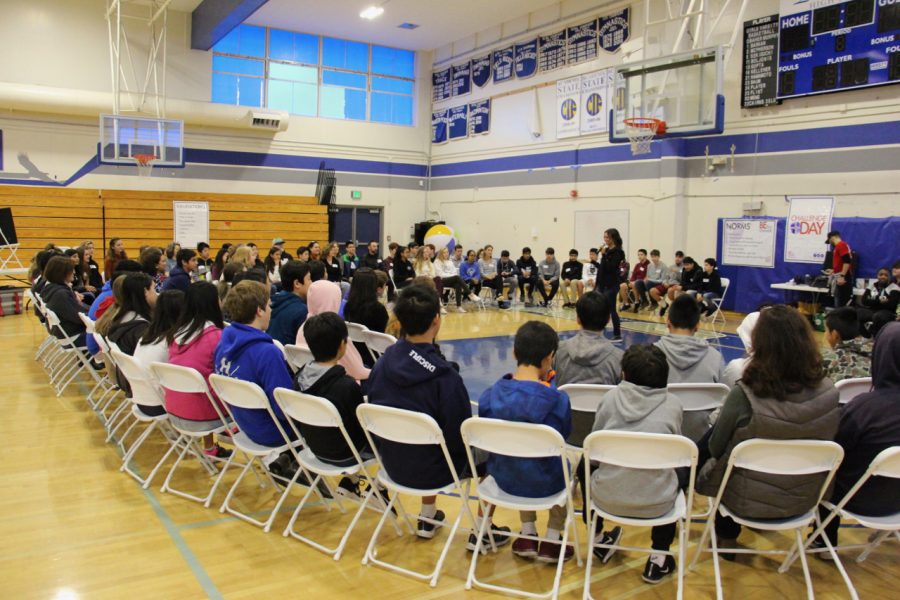 Compulsory schooling in the United States began mainly with a religious mission of enabling children to read the Bible. Looking back, it seems unethical to use education as a means to spread religion, but it was understandably the norm at the time. Similarly, while the five academic subjects are understandably necessary to students’ development and, for the most part, applicable to everyday life, “experimental” school-wide activities such as Challenge Day have raised the question of whether it is within the school’s jurisdiction to force students to participate. While the school may deem it worthwhile and necessary to our growth, should that really be for them to decide?

Students were given a four-day time frame to opt out of Challenge Day, but ultimately the decision was up to their parents, and many students were unaware that it was even an option. If students skipped Challenge Day, they received absences equal to the number of classes they had, making Challenge Day essentially mandatory.

My expectations for Challenge Day were low. The digital citizenship day was not taken seriously, and I expected about the same level of effort from the students in Challenge Day. It seemed unlikely that the school could get a group of teenagers to have a genuine but also involuntary discussion about personal problems. I think the main issue, for me, stemmed from these contradicting ideas. You can’t put people in a room who don’t want to be there and set the expectation that they will open up enough to make the activity worthwhile. Especially considering the often negative preconceptions about Challenge Day, I struggled to comprehend how students could benefit from the experience while going in with a stubborn, negative mindset.

While Challenge Day didn’t exactly shatter these expectations, I quickly saw that my expectations were flawed. All the talk of Challenge Day, not to mention the promo video that was put on by the Challenge Day presenters at the beginning of the assembly, had me thinking that I would be walking into a circle of students who shared mushy feelings. What I ended up experiencing was far different. The assembly wasn’t based around group conversation, but rather felt like a lousy sermon.

I felt that Challenge Day, while promoting a sense of community for the school, missed the mark. The goal of Challenge Day is to open up to others and feel a personal connection, but because it would be nearly impossible to get the small groups for every student, the school turned to the presentation-style Challenge Day for the upperclassmen. I believe the school had good intentions, but it did not feel well thought-out and the emotion brought out through “Stand Up If” questions was short-lived.

So while Challenge Day went beyond my painfully low expectations, what I experienced was not the true Challenge Day that was advertised. In this sense, the day missed its goal of creating a bond between students. Some students may have had silent realizations or resolutions, but there was no personal aspect. By this standard, Challenge Day would have been better spent as a school day, and the assembly changed my view on whether schools should be able to send kids to events like Challenge Day. The school is meant to educate kids and prepare them for college. For students who do need personal help, there are counselors, teachers, anonymous forms, referrals and many resources for those who need them. But it should not be the school’s obligation to make an attempt at helping every student at once: these issues are too personal, and the fact remains that there is no silver bullet to cure everyone at once.

To get more perspective on those who do struggle with a difficult personal history, I talked with one senior about her take on Challenge Day. She recalled that when the speaker asked everyone to close their eyes and think deeply about “everything that has happened in your life,” she nearly left because the feeling was so overwhelming. This furthers the idea that because there was no personal support at the assembly, while deep personal issues were brought to the surface, none were actually resolved. The presenters’ goal was to show that many people go through the same struggle, but that is simply not true. While many people share the same mental illnesses or unfortunate histories, these issues are resolved through personal connection, not an inspirational story. I see the importance of awareness about depression and the reality that everyone has a personal struggle, but the Challenge Day assembly felt like a feeble attempt at getting kids to think about resolving their massive life stories.

Furthermore, I failed to see participation from the staff. This was one of my the biggest indicators that Challenge Day simply did not work its magic, with nearly 1,000 individuals instead of the traditional group of eight to twelve. Needless to say, it was a bit ambitious for the school to make that jump. It is possible to be swayed by the enthusiasm of adults, but it was definitely a mood killer to see my teacher across the bleachers on his phone.

Similar to how an infant will look at its parents as confirmation of how to react to an incident, students often follow their teacher’s example. For example, one of my teachers spoke about One Dollar For Life at the beginning of class, going to the ODFL website and clearly showing an invested opinion on the benefits ODFL. Once he was finished, I witnessed what was about the fastest I have seen 10 kids put cash in a box. Similarly, during the “Angst” movie, my teacher was simply doing what he was required to, poking us with a conversation stick but quickly seeing the fruitlessness and giving up. The influence teachers can have is often unnoticed, but especially when a teacher has earned the class’s respect, the students will follow teacher’s example. So, while I was initially cautious of my judgement of Challenge Day, the teachers confirmed my opinion. Not that the movie discussion’s failure was their fault, but their reaction was simply proof that Challenge Day failed to make any meaningful connections.

Ultimately, Challenge Day did not achieve what it was arranged for because the large groups and purpose of sharing in small groups was too contradicting. The goal of Challenge Day is to help students open up through sharing personal experience. While the large assembly helped students see that they were not alone with their problems, it did not have the same effect as the traditional Challenge Day, which received mostly positive feedback from the freshmen who participated. The school put aside a school day for an activity in which only a small fraction of students actually saw benefits, so while there is nothing innately wrong with Challenge Day, forcing students to come to school for the assembly and putting aside a whole day for a minimally beneficial activity feels unjust to the students.

When we take a step back, it is only one day out of the year, and yes, we can handle it and we will survive. But the majority of students I spoke to did not feel any benefit from Challenge Day, and we will certainly be expecting something new for next year.

In conclusion, I believe my critical feedback from Challenge Day is not an exaggeration. Seeing negative reactions from other teachers and from those who could have benefitted from real connection confirmed my conclusion that the school should not have the authority to force students to come to schoolwide events that are not academic. Those who need help can seek it elsewhere, but it feels unjust that the school can hand out unexcused absences because students did not want to go to the the expanded Challenge Day, which, while done with good intent, ultimately fell flat.