Shilpa Rao is Picking Up STEAM 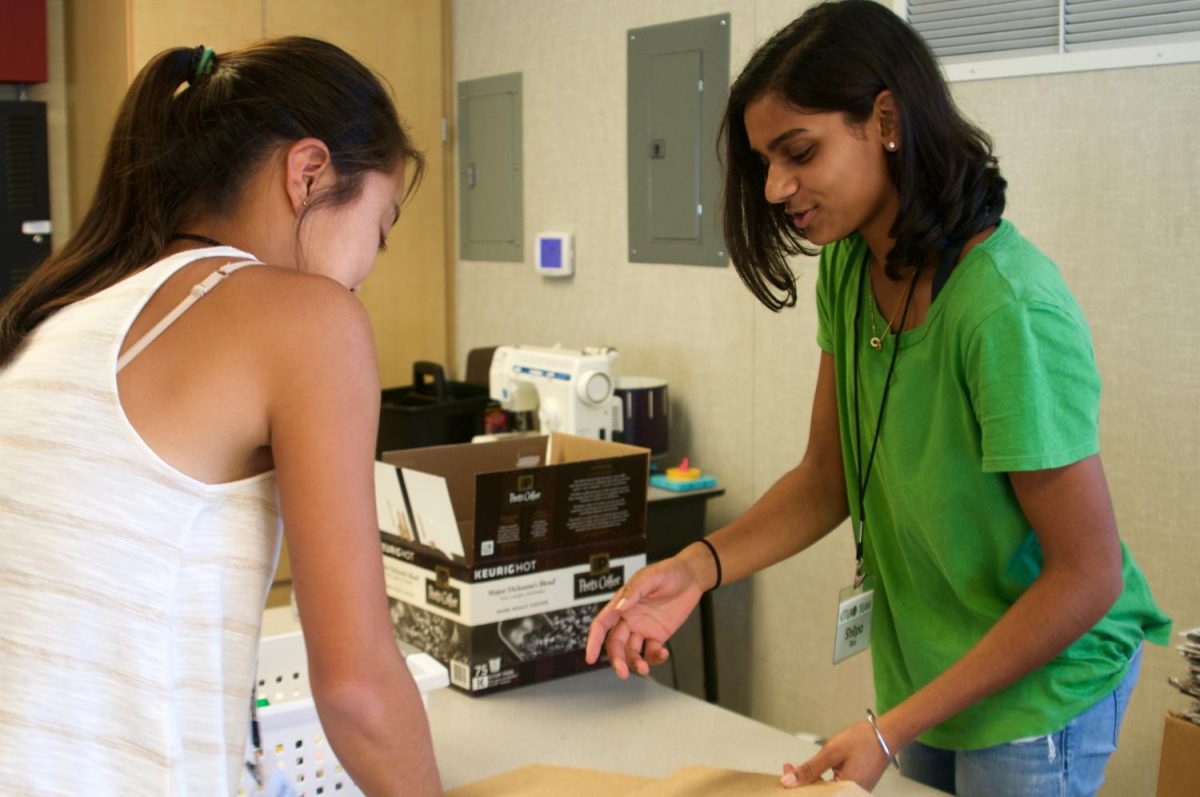 By Cathy Wang and Isabella Borkovic

Sophomore Shilpa Rao and three other students left Los Altos early on a sunny Thursday afternoon, leaving behind their roles as students to become teachers: in Shilpa’s case, a teacher and founder. They traveled to Scott Lane Elementary School in Santa Clara, where the four students turned teachers taught 20 excitable fourth and fifth graders how to make molecules of DNA out of Twizzlers, marshmallows and toothpicks. This was just the first of many classes planned for STEAM Team’s school year.

STEAM Team is an organization that aims to provide a STEAM (science, technology, engineering, art and math) education to underprivileged kids. Its teachers go every month to a school in the Bay Area and give a lesson to the kids connecting to STEAM; throughout the year, the students will hopefully become more interested in new areas of learning that they hadn’t considered before thanks to STEAM. But its founder Shilpa did not always have a passion for helping young students in need. She, like many, used to take the education she got for granted, dreading school days and hating homework.

During a discussion with her mom last year, Shilpa came to realize that others’ education was not on par with hers. Her mom’s experience volunteering in ‘Living Classroom,’ a program started in the MVLA School District, led her to discover the large disparity between the quality of education in Los Altos and Mountain View.

“We were talking one day about how kids from our area are going and solving problems 7,000 miles away in Nepal and Africa when our own [town] has ignored problems [in education] every day,” Shilpa said.

Spurred by the discovery of such inequality, Shilpa took action. She began searching for Bay Area schools whose students needed academic help by using a website to find schools with the lowest Academic Performance Index scores, which measures the “performance and progress” of California schools.

She then drafted an email to each school’s principal advertising a nonexistent STEAM program and sent it around mid-March 2016, totaling around 40 emails sent. From those forty emails she sent, only four decided to actually go through with the program.

But Shilpa didn’t let the underwhelming amount of responses discourage her. Over the summer, she spent the majority of her time hammering out the details of what STEAM Team would be by putting together a plan, a curriculum and goals for the future.

From there, Shilpa had to jump start STEAM Team. As a self-proclaimed “extrovert by nature,” the task of reaching out to peers both in person and through the Internet, having already created a website and social media base for the organization, was no stretch for Shilpa.

And not only did she have the abilities and connections to create a team for STEAM, she also had the drive. Since her childhood, Shilpa had always had aspirations of starting her own company.

“When I was a kid I always liked starting things, and I had pretend businesses and I pretended like I was the CTO,” Shilpa said. “I’ve always been interested in entrepreneurship.”

Shilpa has not always found success approaching her peers and adults when looking to start her own company. In industries and areas like Silicon Valley, anyone looking to “make it” has to prove themselves. Standing at 5’2”, fifteen-year-old Shilpa did not always make the best impressions on people used to dealing with older, more experienced adults. Shilpa has found that she has to work incredibly hard to earn the respect of people ten or twenty years her senior.

While attempting to achieve a non-profit status for STEAM Team, Shilpa tried to obtain a fiscal sponsorship, wherein another company would accept donations or grants on behalf of the not yet tax-exempt STEAM Team. Shilpa approached Los Altos Community Foundation for this sponsorship.

The representative she spoke to had to be pushed to accept a meeting. When they finally met, he barely entertained the idea of being STEAM Team’s fiscal sponsor — nothing came out of the meeting.

But despite this, she soldiered through, and through these experiences grew a tough skin.

“It took a lot of training on my part, to be mentally resilient to people looking down on me,” Shilpa said. “They’re [just] misguided, and they’ve never had an experience with somebody younger, or shorter, or maybe female… What matters is that what I’m doing is helping people.”

Since then, Shilpa has focused on strengthening STEAM Team and is looking to schedule another meeting with LACF in two months. It’s through Shilpa’s refusal to become discouraged that STEAM team has gone so far; whether it be only four schools emailing back or a meeting gone wrong, Shilpa says any problems she has faced only cause her to work harder.

“Everything that puts me a step back is just a bump in the road rather than a life-ending setback,” Shilpa said. “If anything, I was driven [even] more by the setbacks.”

This determination is what helps Shilpa balance her life and STEAM team. As a high-achieving student at Los Altos, taking on the task of managing an organization can seem daunting. For Shilpa, the time she dedicates to STEAM Team is well worth it.

Shilpa’s vision for STEAM Team isn’t about making flashy headlines in big newspapers that she can use in her college applications. It doesn’t even have to do with garnering recognition or fulfilling a certain quota. Instead, Shilpa wants STEAM Team to be about making sure that a quality education is available to everyone.