Seth Donnelly: The Art of Protesting 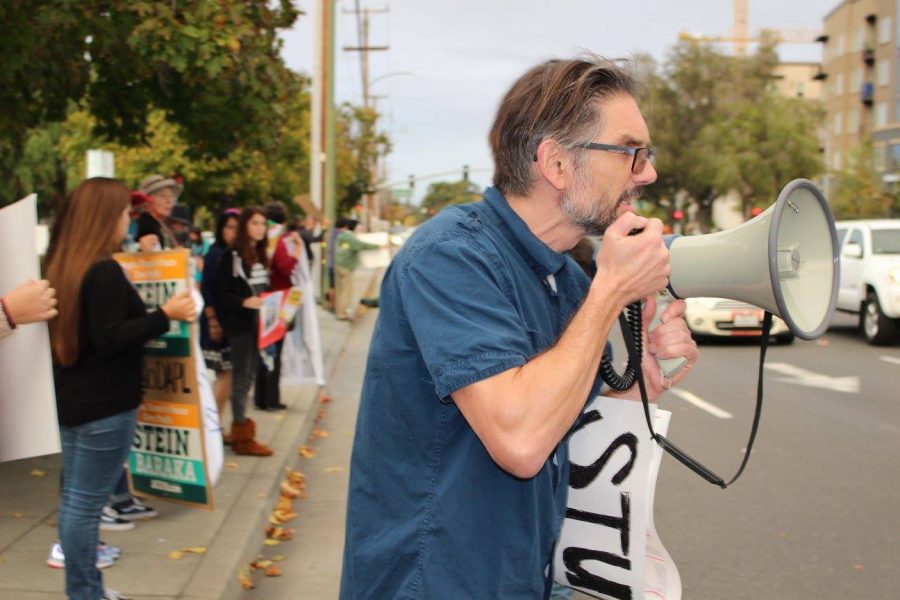 Social studies teacher Seth Donnelly knows how to protest. You might find him picketing in front of Citibank against the Dakota Access Pipeline, reading an open letter to California congresswomen or walking among throngs of LAHS students in the November 14 “walk-out” protesting the election results. In the 90s, while engaged in political activism where he lived in Chicago, you might have even found him temporarily behind bars.

Although he isn’t encouraging his students to get arrested, Donnelly’s activism experience gives him an understanding of the planning, organizing and overall work that goes into staging a protest. As the founding advisor of Haiti Club and a frequent activist in the local community, his expertise is especially useful for eager students wanting to take political action.

“There’s a background that I bring in and try to share with the students here,” Donnelly said. “How to do a press release, how to organize it so it’s not just something random, so people don’t drive by and say ‘Oh you’re just a bunch of people wanting to scream.’”

With Donnelly’s guidance, Haiti club has organized a number of recent protests, many specifically related to U.S. foreign policy in Haiti. On September 30, the club staged a rally in Lytton Plaza in downtown Palo Alto. The rally was calling for the U.S. to not interfere with the then upcoming Haitian elections. The demonstration included a march to state representative Anna Eshoo’s office, where they read an open letter asking her to articulate their concerns to Congress. But Donnelly and the Haiti club don’t just stop at Haiti-related activism. A significant amount of the club’s members showed up to the recent Dakota Access Pipeline protests staged in front of Wells Fargo and Citibank entrances.

“[Haiti Club] discussed it, and the feeling was that the struggle at Standing Rock was in the same spirit as the struggle of the Haitian people, for human rights and democracy and to protect their land,” Donnelly said.

Why is it that these students are willing to demonstrate for human rights causes, even if they aren’t directly connected to the title of their club? This understanding of the wide scope of human justice issues can be credited to the environment Donnelly maintains inside his classroom.

“My class has a very open environment for dialogue and for people to just speak freely,” Donnelly said. “I’ve said to students, if there’s something that concerns them, an issue about human rights and social justice, if it happens to concern me too, I would be happy to meet with them outside of class.”

In the case of the November 14 “walk-out,” a peaceful protest that drew in over 100 Los Altos student participants expressing frustration over the new president-elect Donald Trump, Donnelly marched, but was not an organizer. Instead, the walk-out was largely organized by students over social media, something Donnelly didn’t use as an activist in the 90s.

“With social media you can get numbers really quickly, but it also means that you can be potentially very unfocused, and people might not be disciplined or there for the right reasons.” Donnelly said.

Although this particular walk-out was a safe event overall, Donnelly did not agree with some of the behaviors of certain student participants.

“I think when I was there not as an organizer but just there as somebody… I had some concerns there about people running into the middle of the street, and some of the use of profanity which I think didn’t really help our cause,” Donnelly said.

Especially during a time in our country where multiple human rights issues are hotly debated, Donnelly encourages people to take organized, deliberate action.

“My experience is if we dig in for the long haul, you can achieve results,” Donnelly said. “I understand there’s a lot of frustration right now over what’s happening in our country, but we have to be focused and dignified.”