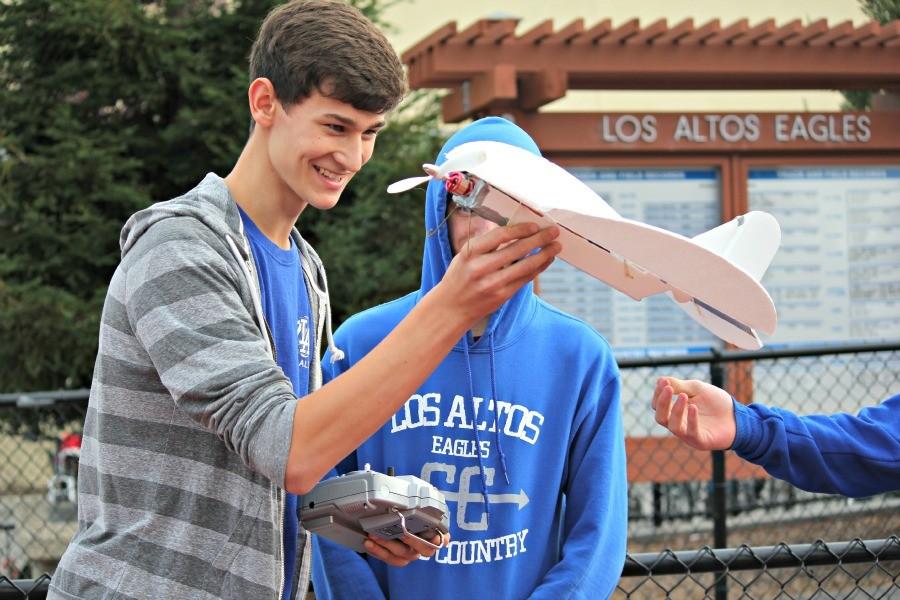 Sophomore Attila Delingat gets ready to test out a handmade remote control airplane with the rest of the Science and Engineering Team. The club aims to provide a comfortable and relaxing environment for high school students to pursue science with group projects and experiments. Photo by Rachel Lu.

The Science and Engineering Team (SET) is planning an upcoming venture that just may top their list of “most dangerous projects.” By mixing kitty litter and sugar, along with other ingredients, in a hollow cylinder and lighting it aflame, the SET should be able to create a rocket that can launch up to 2,000 feet high. As SET president senior Paul Dennig put it, the result should be “pretty sick.”

The goal of SET is to make science and engineering as approachable as possible. By focusing on projects with the goal being to have fun, the club hopes to lower members’ stress and pressure from competition. The SET offers a more flexible option for students to pursue projects and ideas that are not present in existing science courses and intends to create an environment away from the classroom that can appeal to everybody’s scientific curiosity.

“[SET] is sort of like that soft spot away from the competitions, behind maybe robotics or participating in science fairs; it’s a little more home-grown, easy-to-manage,” Paul said.

However, SET didn’t start with such a casual outlook. When Paul founded the club two years ago, the purpose of SET was to help students participate in science fairs with team-built projects.

“I started out the club because I participated in science fairs—I still participate in science fairs—because I thought it was really great,” Paul said. “I did a lot of cool projects and I feel like doing science fairs is something that most people associate with ‘this is really fun!’ It was [fun] for me and I wanted to share it with people, but I went about trying to encourage people the wrong way.”

The idea was that students could bring their ideas to the club meetings, and the team would work together to create them. When only a small number of kids showed up, Paul realized that he needed to reform the focus of the club and shift it to a more casual purpose.

“We reframed the club’s purpose the second year around, and we ended up just doing cool projects,” Paul said. “Instead of thinking about competing in science fairs… we just were more relaxed. We started doing projects in Mr. Randall’s room for our own fun, not really for anything else. That’s the main idea. It’s not a science fair club, and it’s not robotics club either, it’s just doing cool projects.”

On any given week, SET’s projects can range from intense, month-long undertakings to quick ideas that span a single meeting. Some of its recent ventures include radios and holograms made from transparencies, which the team sold at the Holiday Fair on Friday, December 11.

One of the team’s more well-known projects is its first one, the Rubens’ tube, a tube that uses compressed gas to create a visual representation of sound waves through fire. Creating the waves of flame was one of the more long-term projects the SET took on. Operating out of the science wing, the SET has a variety of resources, but usually holds fundraisers or donation drives for project materials. However, unlike other projects, the Rubens’ tube was completely funded by the science department in exchange for the final product. After building it, SET donated it to the school to be used in class demonstrations after the team fixes it up.

Though Paul will be leaving for college in the upcoming fall, the SET is all set to carry on. By giving his officers greater control over the club this year, Paul is ensuring that they will all be prepared to handle the management of the team once he is gone.