Senior Uses Science for a Cause 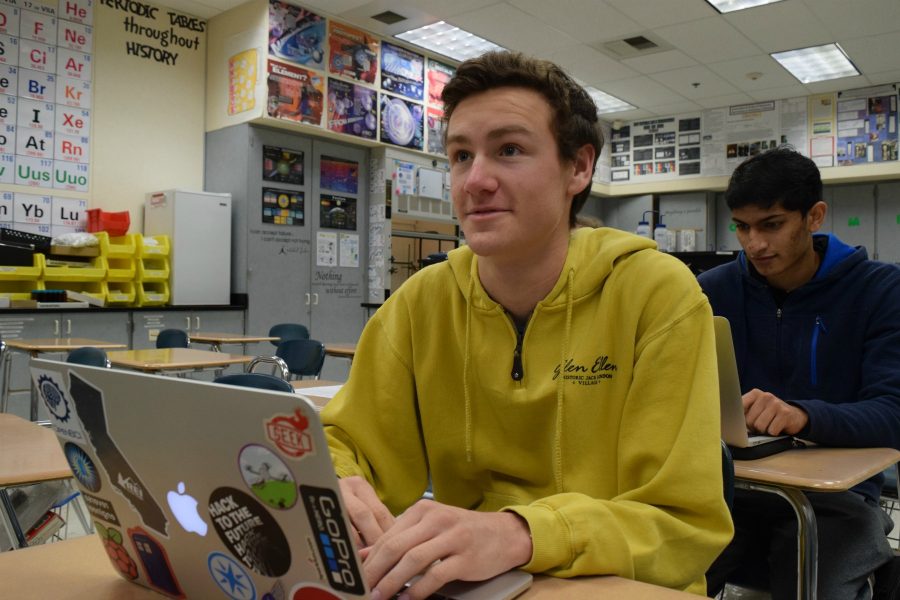 Undertaking scientific research begins with a vision. For senior David Lisbonne, the inspiration for his Advanced Scientific Investigation class project came out of the desire to help someone in need using technology.

Henry Evans, who lives in Palo Alto, is the victim of a stroke-like attack that occurred 13 years ago, leaving him only able to move his head, neck, and eyes, but not preventing him from thinking. In specific terms, he is known as a quadriplegic: paralyzed in all four of his limbs. David wanted to help.

“I went up and met with him at his house,” David said. “I told him about my class, and then asked him, what do you really want? What piece of technology do you not have right now that you really want? And he said, I’d like to be able to change [the shape of my bed] when my wife isn’t here. And from there, the wheels started turning.”

Evans’ hospital bed, in which he spends much of his time, relies on physical buttons to move its individual sections up and down. He cannot press the buttons himself, meaning he can only change his bed shape when someone else is present—in this case, his wife. However, when his wife is not at home, this task is unable to be performed, often leaving him with less-than-optimal comfort.

David’s project aims to remedy this with the use of two technologies. The first, an electroencephalogram or EEG, monitors the activity in the brain.

“[EEGs] are really useful for telling if the brain of the person you’re monitoring is active or if they’re sleeping or awake,” said David. “Also, if you have a number of electrodes across different parts of their brain, we know which areas of your brain correspond to certain thinking actions or certain thoughts.”

The other aspect of David’s project, electromyography or EMG, is essentially a measure of the electricity running through a muscle, reading specific physical cues that will act as signals to move the bed. It will work in tandem with EEG to avoid false positives or false negatives, which could cause Evans’ bed to move (or not move) in an unwanted way. EEG and EMG will serve as checks for each other, preventing errors and ensuring reliability.

““I’m going to design specific muscle actions and sequences [using EMG], like blinking his eyes in a certain pattern, and different patterns mean he wants the top of his bed to move up, or his feet to move up, or something like that,” David said. “To make sure that it doesn’t trigger [an uncontrolled motion], I’m going to be using the brain waves monitoring [EEG] to make sure he’s awake, so that he’s not asleep when that happens.”

David expects to have built a fully working prototype by April of 2017. Looking beyond the scope of this project, he envisions the use of this kind of technology on a wider scale.

“Using the muscle tracking and the mental tracking to see if he’s awake and consciously thinking, you could, in theory, control any piece of hardware in the internet of things,” David said. “The main thing is that any hardware we have now in the world can be connected and communicated to wirelessly, and because of that I feel like there’s this huge opportunity to connect people that physically can’t connect with the world.”