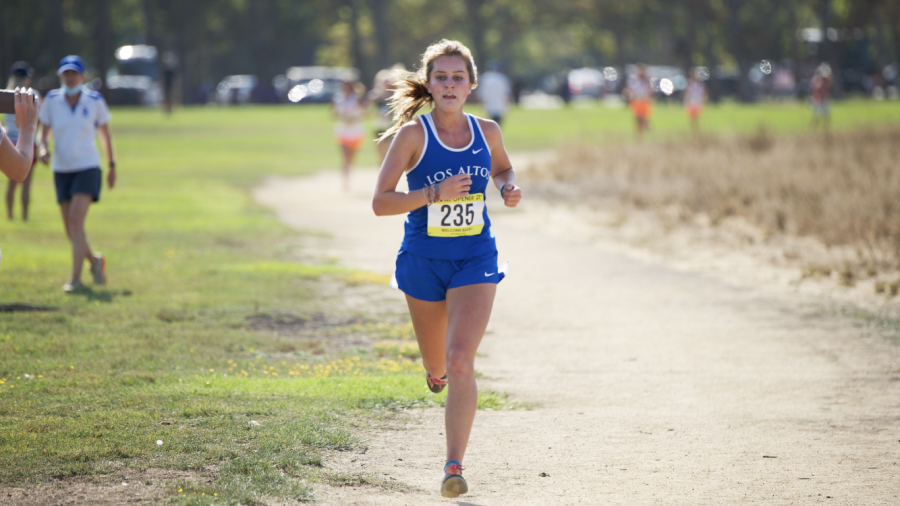 Senior Riley Capuano runs on the Baylands Park course in the first SCVAL meet of the 2021 season.

When Riley spent her eighth grade year in Bend, Ore., she was fascinated by the strong running culture of the city and started to train for running. At the time, though, Riley was still a committed soccer player. In high school, after watching her brother race for the LAHS cross country team, Riley made the decision to finally switch her focus onto cross country and track her sophomore year.

“I always wished I was running in the cross country meets when I would watch my brother’s races,” Riley said. “I just absolutely loved the sport and the culture. [Running] is really rewarding because you see your progress and I like that it’s not subjective. You know that you’re getting faster and better by looking at the time.”

By the end of her sophomore year, Riley’s outstanding performance had qualified her for Central Coast Section (CCS) individually. While Riley improved 45 seconds on her previous personal record at the CCS race, she was just one second behind the sixth runner. Because only the top six runners can make it to the state meet, Riley faced disappointment that year. However, that setback only encouraged Riley to train even harder.

“It was devastating because it had been her goal to qualify for the state meet,” Cross Country Head Coach Steph MacKenzie said. “But it just made her stronger. Something similar happened in track season where she almost didn’t make it to CCS. But as the last qualifier, she beat the people that had beaten her before and made it to finals at CCS.”

As Riley continues to improve after overcoming these initial hurdles, her passion for the sport motivated her to search for colleges that would allow her to continue racing and running competitively.

“I had really good progress sophomore year and I just don’t want to stop running after senior year,” Riley said. “Running makes me super happy and I don’t know how I’m going to survive college without this sport. I also love racing so I wanted to be on a competitive team.”

Throughout her junior year, Riley began emailing coaches and interviewing over phone and via Zoom. By March, she had narrowed down her attention to four schools: Emory University, Colgate University, Middlebury College and Washington University in St. Louis (WashU).

While Riley initially committed early decision to WashU, an unexpected twist happened after the Clovis Invitational on Saturday, October 9. Her exceptional race caught the eye of coaches from CMC and a few weeks after the Clovis race, Riley visited the coach on the college’s campus and even practiced with their cross country team.

“I got a really good feel for the school [after the visit],” Riley said. “Everyone was so amazing and when I was flying home, I could say that that’s where I wanted to go.”

Riley is particularly excited about the public policy programs at the school, as she is interested in government related fields and she wants to use the liberal arts program to explore other passions.

A runner, a leader and a friend

Riley has been more than just a competitive runner; she is also an admirable leader within the team.

“She is very good at pulling all the girls together,” MacKenzie said. “Before each race they get in a huddle and Riley gives them a talk that is personal and heartfelt to calm their nerves a bit. Her calming influence had helped the girls to get their mental game together in big meets.”

Riley’s leadership qualities had allowed her to bring the team together and create a close-knit community. Their teamwork had been a huge factor in their awe-inspiring success this season as they finished sixth in the State meet as a team. Her amiable personality has also helped underclassmen quickly adapt to the team dynamic.

“Riley was so welcoming and nice to me,” sophomore Maddy Randall said. “I feel like she encompasses the idea of being an amazing leader. She runs these amazing times that are so inspiring, but at the same time she would have a conversation with you and be really kind.”

With both competitiveness and benevolence, Riley had been a perfect teammate on and off the racing course.

“She is fearless.” MacKenzie said. “When she shows up at a meet, she is so smiley and friendly, but once she gets on the race course, she has this look of determination in her eyes and this game face. She has a really intense competitive personality that comes out in a race setting.”

While Riley had achieved many successes in her running career, running had benefited her in beyond her races by helping her build a strong sense of self-confidence. She plans to continue her passion for the sport far beyond college, and is even considering a career as a cross country coach in the future.

“Running gives me the backbone of self-confidence,” Riley said. “When I race, I have to give myself positive affirmations and believe that I’m strong and fit. Therefore in other aspects of my life, I just have this confidence that I can get through things that are both physically and mentally challenging.”