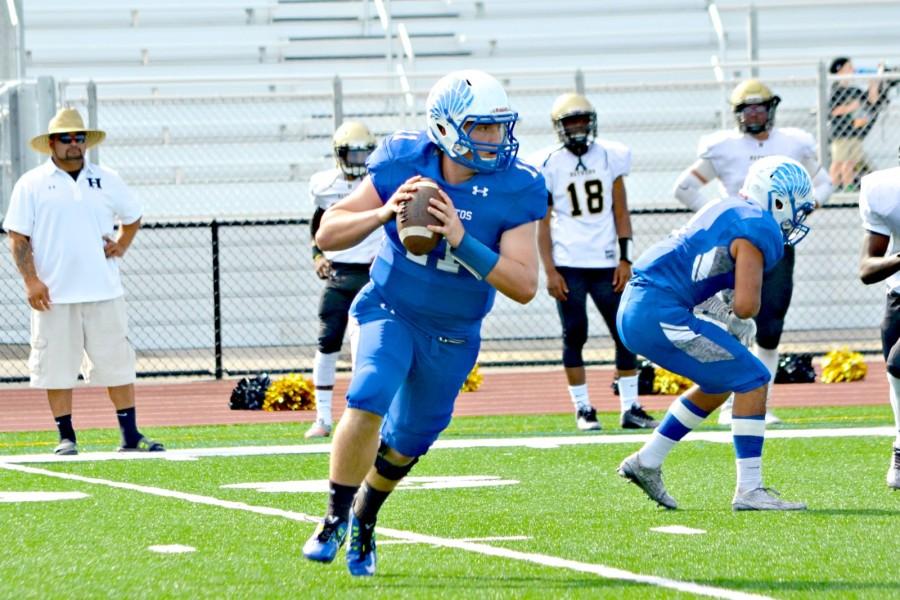 Senior Kyle Gounod rolls out in a game against Hayward. The Eagles' starting quarterback saw his season end early last season, but has fully recovered to lead the team this year. Photo by Kunal Pandit.

During the fifth game of the 2014-15 season, against cross-town rivals Mountain View at Foothill College, senior Kyle Gounod ― a junior at the time ― was tackled in the second quarter of the game. After he heard his knee pop, the coaches pulled Kyle off the field where he sat on the sidelines to iced his knee for the remainder of the game.

After going to the doctor the following week, Kyle was diagnosed with a grade three torn medial collateral ligament (MCL) and posterior cruciate ligament (PCL) in his knee and learned that he would not be able to play for the rest of the season.

“[The coaches] basically told me at the game that it was probably serious and I was probably done for the year,” Kyle said. “I didn’t believe it at the time. I was in denial, and once I went to the doctor and actually got an MRI, I was basically heartbroken. I couldn’t play with the team anymore.”

The recovery process required a lot of rehab and physical therapy. Kyle made two trips to his physical therapist along with completing exercises at home.

“Doing exercises were boring, but [they] made a difference in the end,” Kyle said. “[There was] a lot of self-motivation because it would have been really easy [to] not doing anything, but it was worth it.”

Despite the major setback, the status of Kyle’s knee reached almost perfect condition toward the end of his junior year. He returned to the field for spring training, and he is back on the field, full-force, as the starting quarterback and team captain this season.

“I feel good to go, our team is ready to [win leagues],” Kyle said. “We probably have one of the best teams Los Altos has had in a long time, so I’m excited for league to start and a chance to get back at Mountain View.”