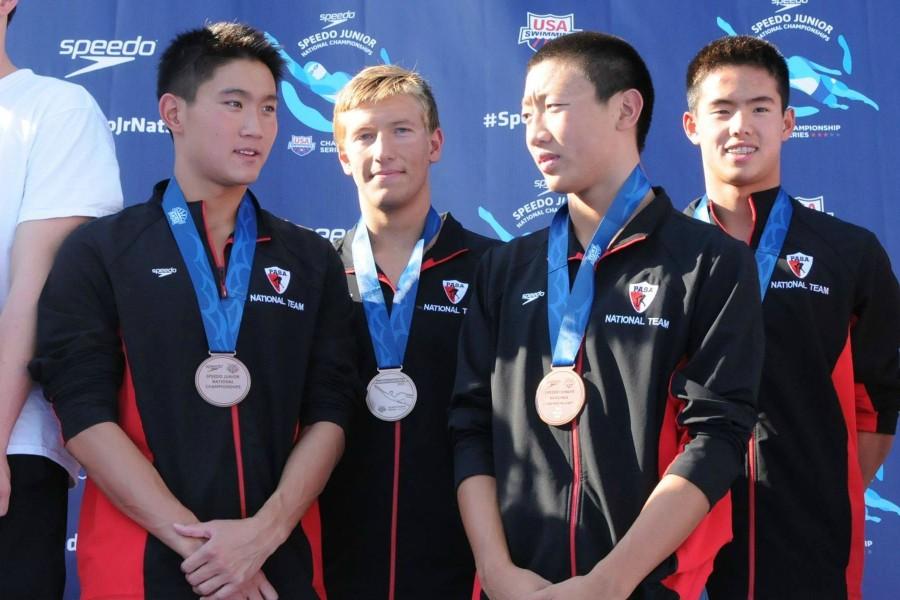 Senior Albert Gwo (far right) stands with his teammates after being awarded a medal for a relay placing at the Summer Junior National Championships. His 50 meter freestyle time of 23.12 seconds qualified him for the Olympic Trials in 2016. Courtesy of Albert Gwo.

Last May, senior Albert Gwo added to a well-storied high school career by placing first in the 50 meter freestyle at the CCS championships. Just one weekend later, he added to his accolades by winning the event (along with the 100 meter freestyle) in the first-ever California State Championship Meet in Clovis. Many would be pleased with proving themselves to be the best in their section and state, but over the summer, Albert took the next step to proving himself one of the best in the country.

On August 3, Albert got the chance to qualify for the 2016 Olympic Trials while racing against the best youth swimmers in America at the Summer Junior National Championships in San Antonio, Texas. Because the competition would be much stiffer than his usual CCS opponents, he knew that he had his work cut out for him.

“When I went to swim my race, I wasn’t going for the cut,” Albert said. “I was just swimming to see how fast I could go because I had a tougher week ahead while trying to adjust to the environment. When I got it I was pretty satisfied that my training over the summer got me to where I was.”
Albert finished fourth out of eight swimmers in the event, but his time of 23.12 seconds meant a whole lot more. By getting under the cut of 23.29, he qualified himself for the 2016 Olympic Trials.

The Trials will be held in Omaha, Nebraska next June and July, attracting hundreds of swimmers in each event.

For Albert, the time was the culmination of hard work and training with his club team and coaches, especially recently.

“[My team] definitely had one of the best training years we have ever had,” he said. “We were invited to the Olympic Training center in Colorado Springs and that definitely improved our performances a ton. My coach also carved a more specific training program for me that really hit the sweet spots to let my train above and beyond what I used to train like.”

Despite the enormity of his achievement and upcoming competition, Albert knows that there is a long time between now and then. In the meantime, he wants to focus on more immediate competitions and development.

In the meantime, Albert wants to focus on more immediate competitions and development.

“Nothing different will happen,” he said. “We are still training with the same program and attending the same meets. My goals are still the same in terms of not ceasing to improve.”

Even so, Albert knows that his current teammates and coaches, both on his club team and at Los Altos, have helped him tremendously, and he looks forward to even more achievements in the future.

“At the end of the day, my team is what motivates me and keeps me pushing through whatever set our coach throws at us and they are the reason why I have become who I am today,” he said.