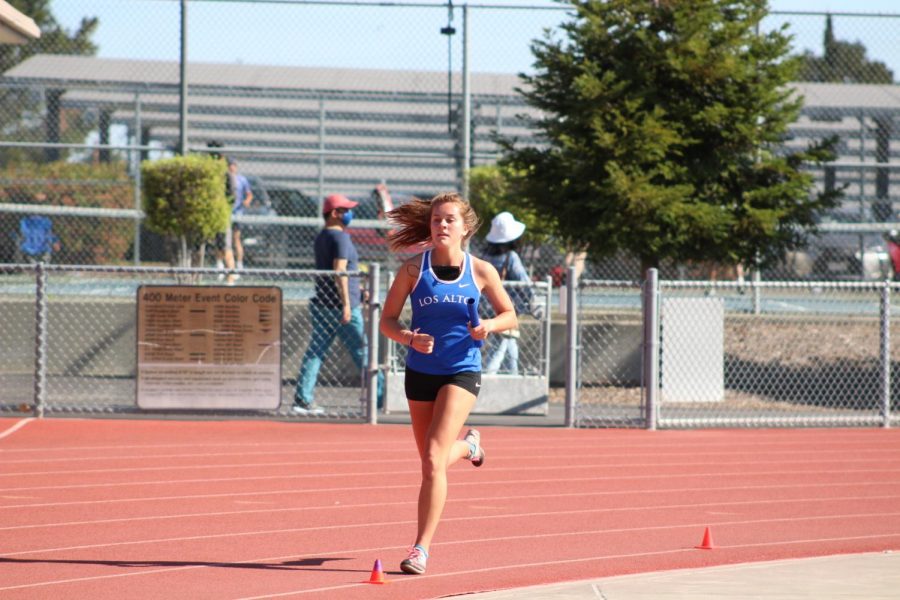 Junior Riley Capuano races in the 4x400-meter relay at Monta Vista High School on Saturday, May 8. At one point earlier this year, SCVAL athletes thought they’d have to settle for watching their peers in other leagues compete in CCS playoffs. However, on Friday, May 14, the SCVAL Board of Managers reversed their decision, allowing certain SCVAL teams, including track and field, to compete in playoffs.

When the Santa Clara Valley Athletic League (SCVAL) previously voted to deny participation in postseason Central Coast Section (CCS) competition and playoffs to all 14 schools in its league, it was met with a significant amount of pushback from athletes and parents in the community. In a meeting on Friday, May 14, the SCVAL Board of Managers reversed that decision, opening up a window of opportunity for college recruitment.

The CCS playoffs have already begun for several sports, including soccer and tennis. The Eagles’ boys soccer and tennis teams were eliminated from the quarterfinals bracket after tough losses last week against Monta Vista High School and The Menlo School, respectively. More sports are to be seeded in the coming weeks.

Before the reversal, one student-led movement under the hashtag “FairPlayForAll” released a statement criticizing this decision publicly on Instagram and gained traction as posts were shared among student athletes.

“Each one of these 14 teams that SCVAL has ignorantly considered to deny a chance at CCS, are all well deserving of a chance to win a CCS title,” reads the Instagram caption of a post under user @hey.haila_, who kickstarted the movement. “I don’t play basketball just to have a good time, I play to win, I play because it is part of my life.”

During the Friday, May 14 SCVAL meeting, a handful of students from different schools voiced their disagreement. Talking points included the importance of CCS for college recruitment, what league championships meant to teams, the disappointment of seeing peers in the county going to CCS playoffs and more.

The majority of Season 3 sports, with the exception of wrestling, gymnastics and water polo, will participate in playoffs this year, and only a small number of Season 1 and Season 2 sports will compete. See the full playoffs schedule and included sports here.