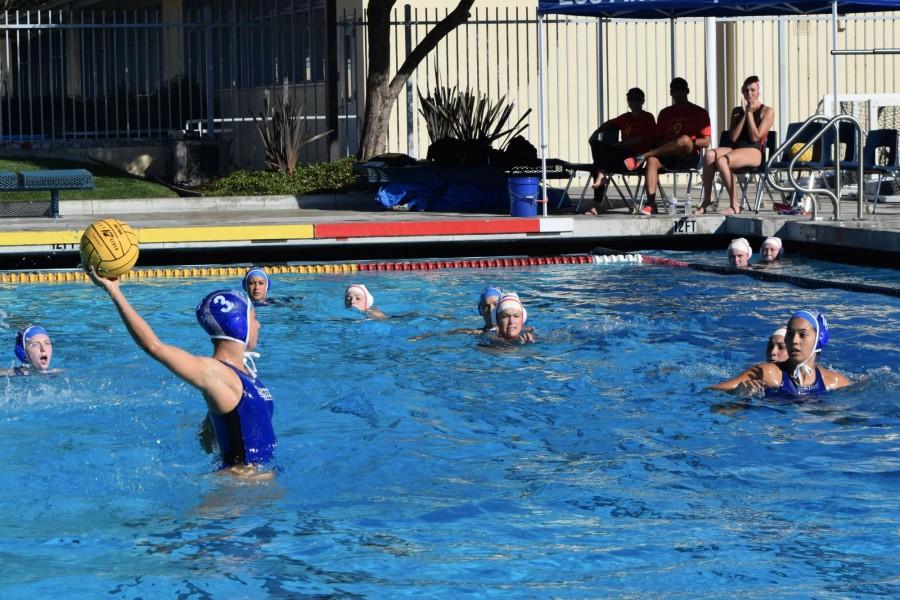 Junior Margo Lusinchi winds up to shoot in a game against Willow Glen. Having only lost one league match, the girls water polo team is in a good position to do well in CCS. Photo by Francesca Fallow.

As of the press deadline, varsity girls water polo was 7-1 in leagues. The Eagles have their sights set high after closing off last season with a third-place league finish. Even with last year’s impressive standing, the team is hopeful to do even better this year.

“[Our coach, Katie Buzzetta,] was telling us, ‘We can’t live in the past, we can’t just go off the glory of the past,’” co-captain senior Christina Pao said. “But really, we’ve pushed it so much further this year.”

The team’s success is due in part to its familiarity with its overall dynamics. The team hosts a strong showing from all classes sophomore and up, and has a developed sense of synergy as a result of playing together for multiple years. Even in the face of losing two strong starters, team continues to score well as its players have handily filled any gaps.

“The girls have done a good job adjusting,” Buzzetta said. “We’re trying not to just concentrate all our attention and power on one or two players and have been trying to spread it across to all six. So even if we do end up losing girls, there will still be those who have the experience and have worked with those spots and know exactly how they play and what they need to do to fill those spots.”

Throughout the past couple of years, the team’s defense has remained strong, due to both the team’s emphasis on defense and Buzzetta’s experience as a defensive player. However, this year the team has taken its play a step further by also tuning in its offense.

“What we’ve really figured out is that we have to have a motion offense, because a lot of our girls are smaller and faster on this team,” Christina said. “So we kind of have to utilize that. We don’t have the same big, hole-set players who can just hold, and we don’t have any lefties on our varsity team, which makes it a little different from other teams. So we’ve really had to work on using drives, using picks and taking advantage of our counterattack offense just because we’re a fast team.”

After winning all of its games in the first half of the season, the team dropped its first game to Los Gatos on Tuesday, October 13. Still, the Eagles kept it close with a final score of 3-5. The team is still seeded first in the league, and aims to use this loss as a lesson to remain focused for the rest of the season.

“I think it’s good for the girls to see that we’re human, and that mistakes can be made,” Buzzetta said. “It kind of forces them to bounce back and keep their heads in the game and stay focused with the task at hand.”

With all the progress the team has made, it is eager to make it to CCS finals ― an impressive goal that the Eagles have not achieved since 2011.

“We want CCS top one or two,” Christina said. “That’s pretty much the big goal. I mean there are State Champs after that, but honestly at this point we have to take each game seriously. It’s still a ball game because every team is about equal in level this year which makes it scary, but also makes the games more exciting. It’s really just about going into each game with the goal of winning that one game.”