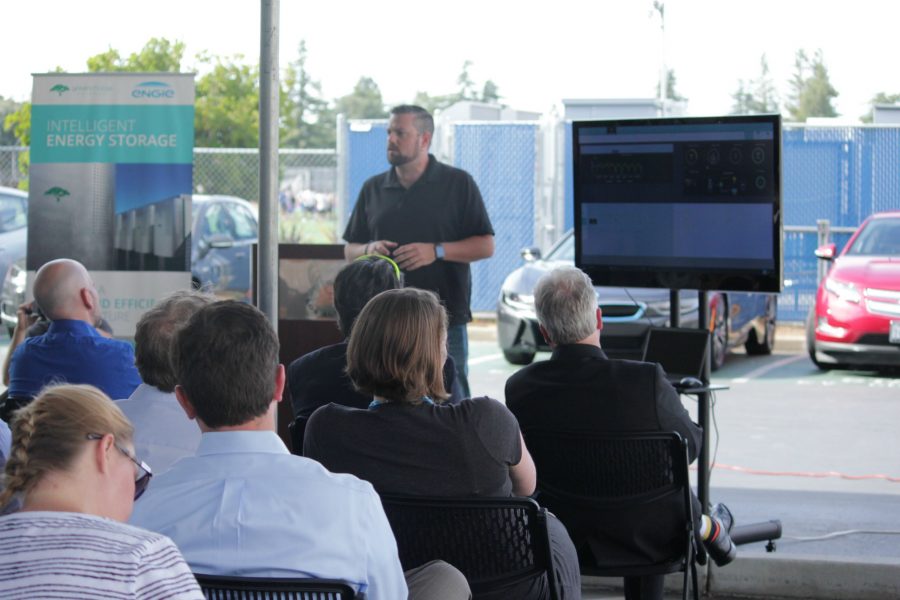 By Rachel Lu and Javin Pombra

At first glance, the staff parking lot seems to be an odd setting for an event celebrating green and renewable energy. However, with closer inspection, the parking lot features exactly the green energy platforms being celebrated — the school battery storage units and electric vehicle (EV) charging stations.

On Wednesday, June 8, dozens of executives from international companies, school administrators and local residents celebrated the anniversary of the installation of energy storage batteries and charging stations. These services were provided pro bono by Green Charge, an intelligent energy storage company which was recently acquired by Engie, an international conglomerate. The celebration also served to showcase Los Altos High’s green technology as a model for other schools in the near future.

The stations and the new battery storage system were installed after parent volunteer Sybil Cramer contacted Green Charge about environmentally-friendly initiatives for Los Altos High School. Through Cramer’s initiative, the school created stations for staff’s EVs and batteries to produce profit for the district through energy savings. According to Cramer, both the new stations and battery storage saved $86,000 this year.

The event kicked off with a speech from CEO of Engie in North America Frank Demaille. Demaille outlined the importance of combating climate change through actions such as partnerships with schools to provide more sustainable methods of preserving energy.

Demaille was followed by MVLA associate superintendent of business services and technology Mike Mathiesen. In his speech, he detailed the process of working with Green Charge and the economic impacts of the partnership.

“We get storage, we get charging stations and there are’s savings,” Mathiesen said. “Every dollar we save on electricity costs are dollars that can be put forward for student programs and the classroom.”

Following Mathiesen, CEO of Green Charge Mark Triplett and Director of Innovation at the National Renewable Energy Laboratory Richard Adams spoke, praising the progress made in the past year. They explained how Los Altos High would serve as the model for future schools to follow.

“Your school has a lot to be proud of,” PR Director at Green Charge Anne Smith said. “You’re going to see a lot more schools and businesses looking to you as kind of a pioneer as [to] what can happen, what the possibilities are.”

As the event came to a close, everyone was given a tour of the battery stations and witnessed the charging stations in action. Green enthusiasts like Cramer are excited to see the impacts these new initiatives will bring to the MVLA community.