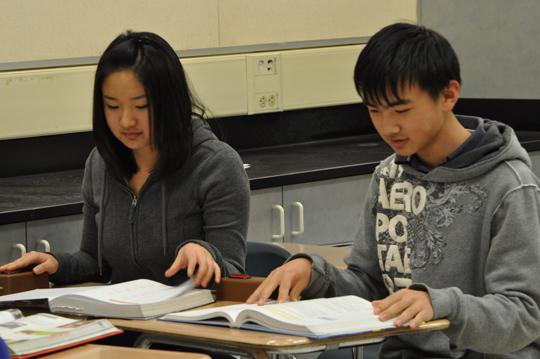 The Science Bowl Team competed in the annual Department of Energy 2011 Bay Area Regional Science Bowl on Saturday, January 29 at Las Positas College in Livermore. The group competed against 23 other teams throughout the Bay Area and missed qualification for the elimination rounds.

“The team is casual, [as] they haven’t been competing for years,” team Coach and science teacher Carl Babb said. “The toughest teams are Monta Vista, Bellarmine College Preparatory and Mission in South Bay.”

The team competed against various high schools including Bellarmine, Saratoga, Livermore, Castro Valley and Santa Teresa.The team missed qualification by one round.

“We didn’t know what to expect going in,” team member senior Jacquelyn Cheng said. “As a first-year team, we did really well against more experienced teams.”

“You need a lot of gameship,” Babb said. “It’s like Trivial Pursuit. In an ideal team, [members] are hobbyists who know a lot about some subject, though they may not have an A in science. Somebody who tinkers, who knows a lot of trivia and is more conceited is better at the game because those who have A’s can be more timid.”

However, knowledge itself is not enough to succeed in the competition. The bulk of the competition involves learning how to press the buttons before the other teams, which involves reflexes. While most of the teams all have relatively the same amount of knowledge, winning the game involves being able to buzz in the quickest.

“Most of the practices focus on the buzzing,” Babb said. “We spend a lot of the time trying to train the team’s reflexes. Those who win are fiercely competitive … they have confidence [and] are fastest with the button, [but] it really depends on the luck of the draw.”

Seniors who participate in the Science Bowl can win a $5,000 scholarship if they wish to pursue a career in science, technology, engineering or mathematics and plan on attending a college in the fall.

“It looks good and puts [those who compete in the science bowls] on the top of the academic best,” Babb said. “Because the process is like an academic test, it is something to put on college entrance resumes.”

Babb said that the Science Bowl fosters a growth in scientific achievement and interest. He believes that team members are capable of exposing themselves to many different disciplines of science.

“It’s hard to find a team that will stay committed for an entire year,” Babb said. “It was a little disappointing to not have that many members this year since we started so late, but hopefully next year we’ll be able to get more members and do better.”