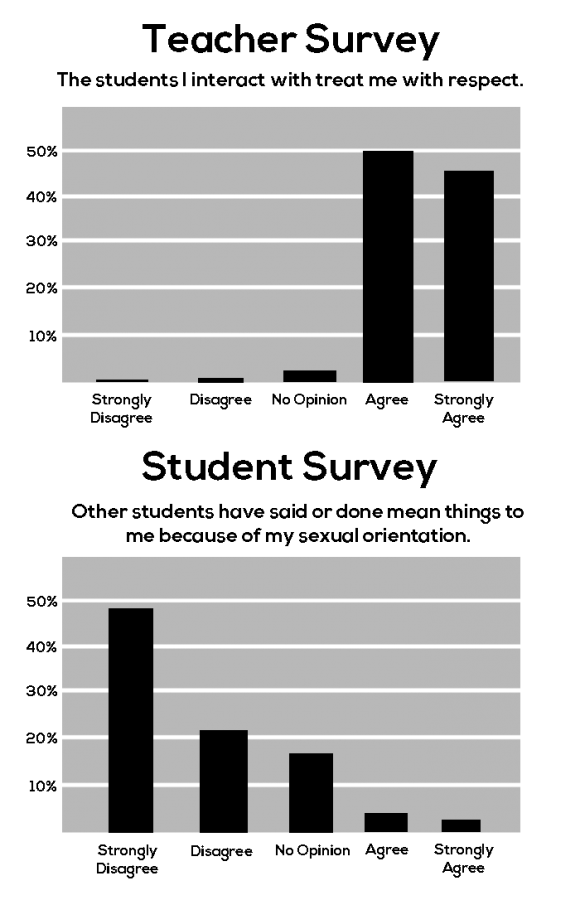 Two questions from surveys students and teachers took last spring about their perspectives on school culture and academics are shown above. The school will use past and future results of surveys to create an action plan for the future WASC cycle and re-accreditation process. Ashley Cai.

By Priya Dixit and Madison Woo

Los Altos this school year began a process to be accredited for the next six years by the Western Association of Schools and Colleges (WASC). Schools can only issue valid diplomas with regular accreditation, which requires schools to develop and meet a set of academic and cultural standards.

Currently, Los Altos is collecting and analyzing data to create a self-study concerning aspects of the school, involving both the academic environment and culture of Los Altos. As a part of this process, the school also creates an action plan, which will guide its improvements over the next six years.

WASC will then send a visiting committee composed of teachers, board members and administrators from other districts to evaluate whether the self-study accurately reflects the school. The self-study will then be sent to WASC, who will ultimately determine the school’s accreditation.

The process provides a way for the school to assess how it has improved after the last six-year cycle and how it can improve for the next cycle. The administration encourages students, parents and teachers to voice any thoughts they have to better the school.

The process is already underway, Assistant Principal Galen Rosenberg said, and is slightly ahead of schedule in comparison to the past. Los Altos started with student surveys last spring and will continue with parent surveys next spring. Over the course of this school year, Los Altos will use focus and home groups to collect feedback from students, parents and teachers.

The surveys provided anonymous polls for students to answer questions about how comfortable they felt around their teachers and peers and how much of their stress was caused by school. Faculty also had to take a survey with similar questions regarding if they felt respected in the Los Altos community and if they were supplied with sufficient learning materials.

Home groups, which draw from student and parent populations, and focus groups, which consist of staff members and on-campus student groups, allow the administration to collect input that effectively represents student, parent and staff populations. All teachers will participate in a focus group on assessment, organization, curriculum, instruction or culture.

“I hope that students and parents understand that this is politics in the good sense of the word,” Rosenberg said. “It’s a group of people in a democratic process deciding what to do. If you have a concern, or an area of interest or a goal that you want us to move toward, you need to communicate that to people in leadership positions. That’s Mr. Miyahara, me, Ms. Satterwhite or a focus group leader. If there’s something you believe is really important, get out and advocate for it.”

After the data collection process, the Leadership Team will convene with the administration to determine the overarching goals for Los Altos’ Action Plan, an outline that describes what Los Altos hopes to achieve in the coming years.

The Action Plan, which Los Altos drafts every six years alongside the self-study, involves goals that concern academic performance and school culture. One of the goals for the 2012-2017 cycle was to align classes in departments and between grades.

“There may be some new [goals] and some things will change,” WASC coordinator and social studies teacher Derek Miyahara said. “One of the goals about student wellness came out of the last Action Plan, [and] I would imagine there’s going to be a focus on student wellness in the next six years.”

By next spring, the school will have a set of main goals and will discuss a new proposal to address any issues that arise from feedback.

Los Altos encourages students to be involved in the process by voicing any ideas or feedback they have through the annual survey and home groups. If parents and students have any thoughts in regards to improving Los Altos, the administration recommends they speak to teachers with leadership positions.