Last year, high schools in California introduced the newest iteration of standardized testing: Smarter Balanced Assessment Consortium, also know as SBAC. The school’s primary issue with SBAC testing no longer revolves around the content on the exam itself. The problem nowis scheduling conflicts, which will likely increase stress on already overloaded juniors.

Earlier this semester, assistant principal Galen Rosenberg discussed potential testing schedules with a group of students from the junior class in order to get their input on the options. Rosenberg and the administration took these thoughts and opinions into account when crafting the new schedule.

“After the experience last year with the first round [of SBAC testing], we feel like the schedule we have where students will go to [their English and Social studies classes to take the exam will not be] more work, but less work,” Rosenberg said.

The school contemplated the possibility of modifying semester finals to reduce stress, which would prove to be a significant aid to juniors who have to deal with SBAC testing from May 16 to 20, right in between AP exams and finals week. Unfortunately, this is no longer being considered, as the administration has decided to actively focus on reducing stress throughout the entire year.

“The junior teachers… will have to lighten the load that week,” Rosenberg said. “Inevitably, teachers in English and social studies classes will modify what they will be doing.”

During the week of testing, it will be primarily up to the teachers to reduce the load on the students. With no official plan, the amount of work taken from the curriculum to compensate for testing will inevitably vary between teachers.

While reducing student workload during SBAC testing week may lessen some stress initially, students will still need to endure five days of difficult testing. Students may also have to recover from a more cramped curriculum.

“We’re figuring you just go to class that week,” Rosenberg said. “We’re not trying to make a big deal out of the SBAC testing at this point.”

With this mindset being enforced, students will likely not take SBAC testing seriously. This may reduce stress, but it defeats the purpose of the testing if students do not try. The administration encourages students to do their best, but an entire week of serious testing is a big deal. It seems that there is no way to “not make a big deal” of SBAC while having students perform at their highest output. There is no way to treat the tests lightly yet do as well as possible.

Ultimately, SBAC testing will likely increase the already detrimental stress and workload some juniors face while calling for more organizing from teachers, though we have yet to see by how much. There seems to be conflicting messages about how students should approach the testing. Lack of of planning to reduce the additional stress caused by the tests and the time-pressed curriculum seems to justify the choice to take the test lightly. At the same time, however, these scores reflect our school’s educational achievement, and it’s within every student’s responsibility to try their hardest. Of course, working hard on a week’s worth of testing in both history and English requires a lot of draining concentration, leaving us in a predicament. 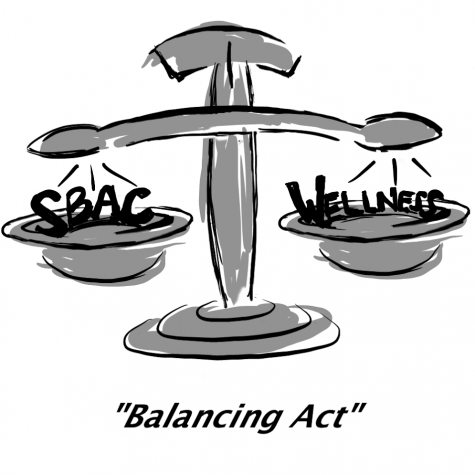 The impact of this year’s SBAC testing will set the tone for upcoming years. Instead of waiting to witness its effects, the administration should take more initiative surrounding the SBAC schedule beforehand to lighten the load and help students perform better on a test that affects the school as a whole.