SATIRE: Years of research into reducing student stress culminate with the unveiling of motivational signs 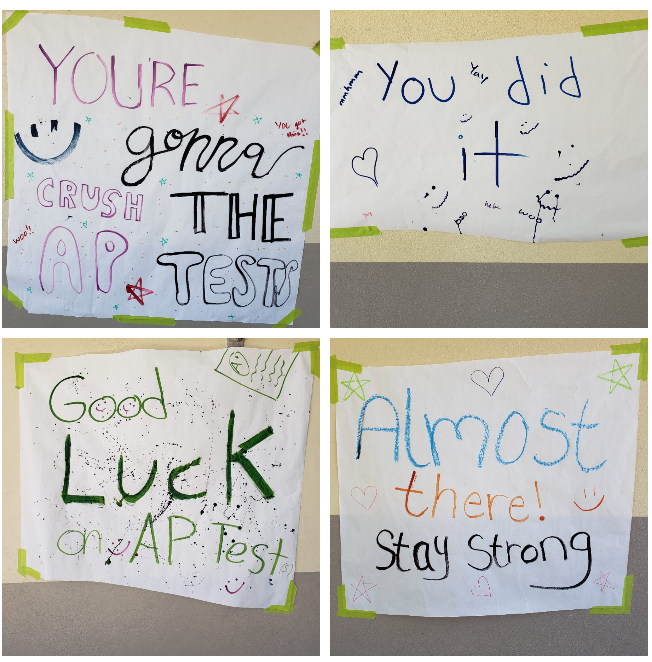 As finals season reaches its peak, one team of dedicated members from Los Altos High School’s Associated Student Body (ASB) has been hard at work addressing the ever-present issue of student stress. The result of their efforts, a collection of signs plastered throughout the school, has completely revolutionized the way students deal with mental health.

After extensive pedagogical research and experiments involving changing weight on exam scores, altering testing schedules and other innovative new study practices, an ASB task force categorically concluded that there is no better alternative to alleviating the pressure of final exams than posting inspirational signs bearing messages like “Stay strong” and “You did it.”

“The last few weeks of school are always a difficult time for high school students,” task force member junior Thomas Lambert said. “AP tests, final exams and projects dominate every waking hour of a student’s life, leaving people feeling completely hopeless. One day, I was thinking to myself about how I’d feel so much better if I had constant visual reminders telling me to stop being sad, and it was like a lightbulb went off. I knew what we had to do.”

In a random sampling of 400 LAHS students, 94 percent of students reported feeling an immediate wave of calm washing away all their insecurities upon viewing the motivational messages attached with green masking tape to the side of various buildings around campus. In addition, 76 percent claimed to have spiritually transcended all earthly concerns within minutes of viewing a sign stating “Almost there!”

Indeed, much of the student body has decided to stop feeling stress and all other negative emotions as a result of the initiative. One student currently enrolled in six AP classes, eight clubs and three part-time internships was particularly transformed by ASB’s efforts.

“I’ll be honest, this year has been a struggle for me,” junior Hannah Cruz said. “That is, until a couple of hours ago when I walked by the 300s wing on my way to AP Lang and saw something incredible.”

What Hannah saw, a sign reading “Good luck on AP test,” was enough to turn her life around.

“It had some fun smiley faces and decorative squiggles on it,” Hannah said. “I totally froze up when I saw it for the first time. Somehow, I just feel like everything’s gonna be okay now.”

Thanks to ASB’s artistic ingenuity, Hannah, whose schedule prevents her from sleeping more than three hours a night, is now at ease with her study habits.

The sign-making initiative has since caught on and spread to educational institutions across the nation as a model of promoting student well-being and a less competitive academic environment. Now, the federal government is beginning to take note.

“What these students have done is truly amazing,” U.S. Secretary of Education Miguel Cardona said in a phone interview. “For years, our nation’s top educational experts have been hearing the same things from students: everyone’s too focused on competition, too worried about grades to care about learning, all that stuff. We started to think the issue was unsolvable. Not anymore, and it’s all thanks to signs.”

But the ASB team isn’t done yet. They’re considering upgrading their signs to thicker poster paper, or maybe even cardboard.

“The possibilities are limitless,” Cardano said. “We can’t wait to see what these young leaders do next as they champion mental health.”