Sarah Bettinger graduates just in time for the holidays 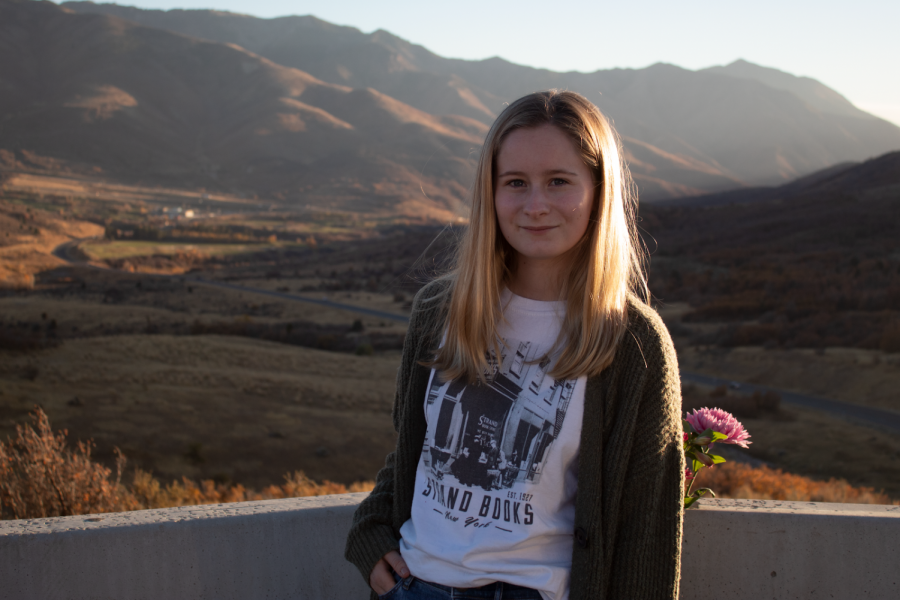 After completing her senior year last Friday, December 18, Sarah Bettinger, ’20, poses for her graduation pictures. Most high school seniors may opt to graduate alongside their peers at the brink of summer, but Bettinger graduated a semester early, eager to start the next chapter of her life at Brigham Young University in the spring.

High school graduation is traditionally a sea of students dressed in caps and gowns, eagerly waiting to receive their diplomas and start summer vacation. In the middle of December, Sarah Bettinger’s, ‘20, graduation looked remarkably different. Not only because of social distancing or the chilly weather, but because she graduated half a year early.

Graduating early had been on Bettinger’s mind since freshman year. The main factor in Bettinger’s choice was the lack of social connection she felt throughout high school in addition to being eager to start her college experience. Despite having the idea in her head for years, it was only in January of this year that she began making concrete plans.

“I had a really hard transition into high school because I had come from Blach, and most people from there went to Mountain View,” Bettinger said. “It was challenging for me to adjust and make completely new friends.”

When it came to pitching the possibility to her family, her parents and sisters were initially uncertain and wanted her to give it time and graduate with her other classmates. But despite various concerns about what she would be missing out on, Bettinger’s family eventually became very supportive of her choice.

Bettinger had already made her decision in January of 2020, before the pandemic had entered the picture. However, even though COVID-19 took away in-person classes, she saw the silver lining as distance learning removed most of the potential downsides of leaving high school before spring. She was already prepared to sacrifice end-of-year events such as prom, grad night and graduation, but given that they may not happen at all, she felt that there was even less to lose.

Ready to set her plans into motion, Bettinger had to discuss the next steps in the process with her academic counselor, Dafna Adler.

“I think a lot of the counselors encourage students to do things the way they’re written out and the way that everyone else does them,” Bettinger said. “When I first asked my counselor, I laid it all on the table and told her, ‘This is what I’m going to do, and I need your help doing it.’ She was really responsive to that and helped me work out all the details.”

After discussing credits and paperwork with Adler, for the most part, she was in the clear. Bettinger had taken a language outside of school and completed her math and science requirements. However, she had to tackle completing a year-long English course in half the time to meet the winter deadline.

By taking half of the course in two weeks over the summer through the Adult Education program, she was able to finish the remaining material during the fall semester of her senior year. The tedious process of working through a semester’s worth of content in only 14 days almost made Bettinger reconsider her early graduation plans.

“Taking English over the summer was so difficult for me because it was a two-week intensive course that was very reading heavy,” Bettinger said. “The course said it was going to take six to eight hours a day, and for me, it ended up being more like 10 to 12 hours daily.”

Bettinger also had to take care of her college applications during the summer to stay on schedule with her plans to enter college in the spring. With the pandemic, though, she found an abundant amount of time to work through them.

Her top school, Brigham Young University (BYU), had its application due in August while her second choice, the University of Utah, had its deadline in December. This allowed Bettinger to apply to BYU first and get a reply before submitting an application to another college.

Having been accepted there, Bettinger is now eagerly awaiting the beginning of her college experience in January and moving to Provo, Utah, to live on campus. Bettinger saw little reason to wait an entire semester and wanted to get a head start on her higher education as well as interacting with her new peers.

“I’m most excited about the social aspect of having a huge pool of people to get to know,” Bettinger said. “I feel like even though high school is a big school, by the time you’re a senior it feels small.”

Although college may be a new experience for Bettinger, she already has a supportive community waiting for her. Not only do her two older sisters currently attend the school, but Bettinger will only be an hour car ride away from extended relatives. And as a member of the Church of Jesus Christ of Latter-day Saints, she also feels assured in her decision because the school is run and attended by members of her religious community.

“Given that it is a religious school, there are standards of behavior that students are expected to fulfill,” Bettinger said. “It’s really nice to be in a place where the people around you understand what you believe in; you’re not the only one.”

Despite being nervous about this significant transition, she looks forward to the change in scenery and weather Utah has in store for her.

“I’m also excited to go to school in a place where there’s snow,” Bettinger said. “I know that college kids don’t go sledding every day, but I certainly will.”

Even though the path to graduating early has had its ups and downs, Bettinger is happy with the turnout and hopes that other students in similar situations won’t be afraid of making the choice that’s best for them.

“Think about the reasons as to why you’re hoping to graduate early and make sure that those reasons are going to be fulfilled,” Bettinger said. “Know if you’re ready to be living on your own, if you’re ready to leave your friends and if you’re willing to sacrifice some of those senior moments. Weigh the cost and benefits and really decide if it’s for you personally.”