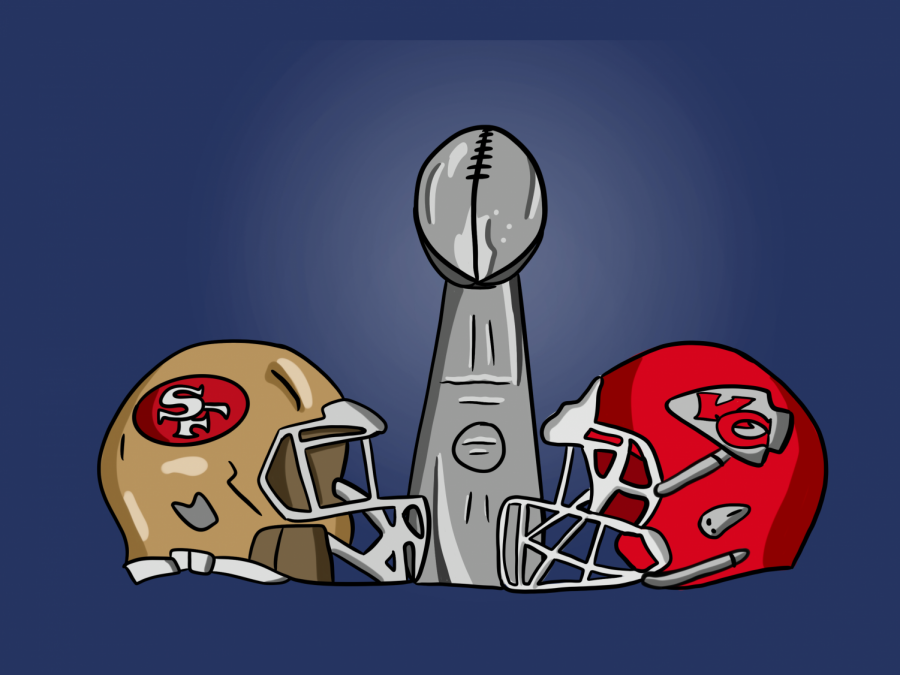 The San Francisco 49ers and the Kansas City Chiefs will face off in the Super Bowl LIV on Sunday, February 2.

After a disappointing 2018 season as debatably one of the weakest teams in the NFL, the San Francisco 49ers have overcome all odds and made it to the Superbowl. This year’s dominant defense and explosive run game have been a far cry from the team fans had to watch last year, when it seemed that new quarterback Jimmy Garappolo was their only hope.

Garappolo, former Patriots backup quarterback, signed with the team in a late, 137.5 million dollar deal. Fans hoped he would prove to be a franchise quarterback and save the Niners, but that hope would be shattered in just the third game of 2018 when Garoppolo suffered a torn ACL and was out for the rest of the season.

But things have been different this past year. Garappolo is back with the team and has proven to be a reliable, at times great, quarterback. Tight end George Kittle, many fans’s favorite player on the team despite his disgustingly sweaty hair, has remained an integral part of the team. Niners defense is top-ranked after drafting first-round pick Nick Bosa, and players like running back Raheem Mostert have begun to shine.

With a record of 13-3, it may seem as if this last season was easy, but that is not the case. The Niners were constantly in competition with the Seattle Seahawks to remain at the top of the NFC West and secure their spot in the playoffs. As they neared the playoffs, it seemed that every game came down to the last few minutes and would determine the rest of their season.

But after defeating the Seahawks in their last regular season game, the Niners reached the NFC Championship and were one game away from Superbowl LIV. They were set to play the Green Bay Packers at Levi’s Stadium, their home field, who they had previously crushed 37-8 before the playoffs.

Although I was scared at the beginning of the game, either because I’d just remembered that I had an upcoming chemistry test or because I was worried Garoppolo would be just as nervous as I was and get sacked 200 times, there was really nothing to worry about. The Niners began the game with the opposite of a bang, but momentum began to build and by the end of the half: they were up 27-0.

The Packers came back with a little more fight in them after halftime, outscoring the Niners 20-10, but there wasn’t much they could do. After a disappointing day for the Packers’s defense and an impressive day for the Niners’s rushing offense (namely Mostert), the game ended with a score of 37-20, the Niners comfortably taking the game.

Garappolo attempted just eight passes throughout the entirety of the game, completing 6 for 69 yards, while Packers quarterback Aaron Rodgers threw for 296 yards with almost an 80 percent completion rate. What allowed the Niners to win against such a formidable quarterback were the rushing numbers they managed to put up: 285 yards (220 of which were Mostert’s) compared to the Packers’s meager 62 yards.

As players and coaches swarmed the field when the game was over, the camera panned down to Rodgers’s long, bearded face as he stared up at the scoreboard in dismay. I felt bad for him, but then I remembered how rich he is. Especially since he’s in all those State Farm commercials.

Super Bowl LIV will take place in Miami, where the Niners will face the Kansas City Chiefs. According to CBS’s model (which tests each game 10,000 times), the Chiefs are favorites by just one point. And while I’m not sure that we can put all of our trust into this model, I’m pretty sure that it’s right about at least one thing: it’ll be a close game. The Chiefs’s third-ranked offense will have to face the Niners top-ranked defense, and the Niners’s seventh-ranked offense will have to overcome the Chiefs’s ninth-ranked defense.

After the Niners’s most recent performance against the Packers and given Mostert’s newfound explosiveness, I’m confident that they can rush the ball with efficiency and consistency. The Chiefs have also shown that they can come back from a 27-0 deficit, scoring two touchdowns in under two minutes against the Texans in the AFC Divisional Game.

I think that if the Niners’s defense can live up to the standards they played with at the beginning of the season and during the NFC Championship, they’ll be able to hold the Chiefs’s offense to a low enough score to stay in the game. Though ESPN experts have picked the Chiefs to win, I’m putting my confidence in the Niners just for the sake of being optimistic for once. As long as Garapollo doesn’t crumble under the pressure and Mostert keeps running like he has been, I believe that the Niners can get their first Superbowl win in 24 years.

Whatever the case, I think the entire country is appreciative that the Patriots aren’t in this one.