Russo wins grant to investigate the evolution of sleep 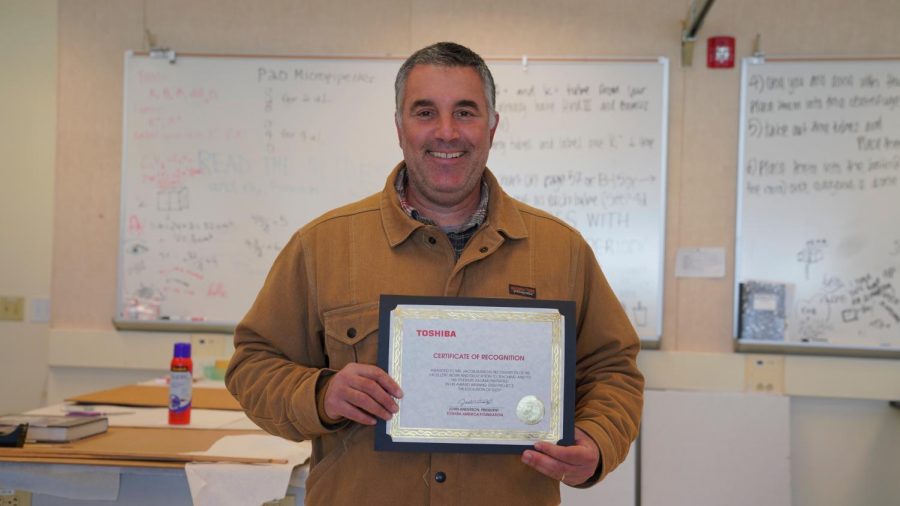 Biology teacher Jacob Russo holds up the certificate for the $5000 grant he received from the Toshiba Foundation. The money will be used to purchase DNA processing equipment for his new lab which will investigate the evolution of sleep mechanisms.

On February 26, the Toshiba America Foundation awarded biology teacher Jacob Russo $5,000. This organization, which is associated with Toshiba Corporation and the Toshiba America Group companies, provides grants for K-12 classroom STEM project ideas. In his application, Russo proposed a lab that would enable students to explore sleep as a phenomenon and its connection to genetics and evolution.

Russo said he was inspired to form his lab proposal after he attended the National Science Teachers Convention in Atlanta two years ago and listened to a Duke University researcher discuss the evolution of sleep. At the same convention, Russo visited a workshop hosted by miniPCR, a company which develops equipment and technology related to DNA. There, he was intrigued by miniPCR’s lab, in which people could study the genes that code for the protein moderating a person’s circadian clock. Also known as circadian rhythms, a circadian clock accounts for the body’s physical, mental and emotional changes that occur in 24 hours and is affected by environmental factors such as the rising and setting of the sun or temperature.

In Russo’s modified lab, students will extract the gene that is connected to their own circadian clock and make copies of it. Then, they will determine their genotype and take a sleep survey to learn their phenotype.

“[The students will find out] where [they] are on that continuum from being a strict morning person to a strict night-owl,” Russo said. “Before they know what their genotype is, they take the sleep survey and figure out what their phenotype is. Then we look for a connection between the two.”

With the money from the grant, Russo will buy thermal cyclers, an apparatus that allows students to extract DNA and make billions of copies of DNA using the polymerase chain reaction (PCR), from miniPCR. Russo is unsure when he will implement the lab because he first needs to calculate how many thermal cyclers he can buy with the money; however, he knows that it will be inserted into the evolution unit and connect to other studies of biology such as natural selection, common ancestry and biodiversity.

Russo said his students have already honed in their skills by completing a recombinant plasmid lab created by AMGEN, a biotech and pharmaceutical company. AMGEN partnered with Los Altos this year to provide AP Biology students an opportunity to learn more about genetic modification. In this lab, Russo’s students used the polymerase chain reaction to make copies of DNA segments and gel electrophoresis to observe the DNA. These two skills will be crucial in completing Russo’s new lab.

If students enjoy Russo’s lab and obtain a deeper understanding of evolution, Russo plans to apply for other grants and add new labs to other units. For example, he believes that a lab will make the way that they teach Mendel and Mendelian genetics more engaging.

“I’m hoping that [the grant] will benefit all the students that get to get exposed to this idea of sleep as a phenomenon that we can use to learn about natural selection and common ancestry,” he said. “If it works out, than it can potentially do it [for] other classes too.”