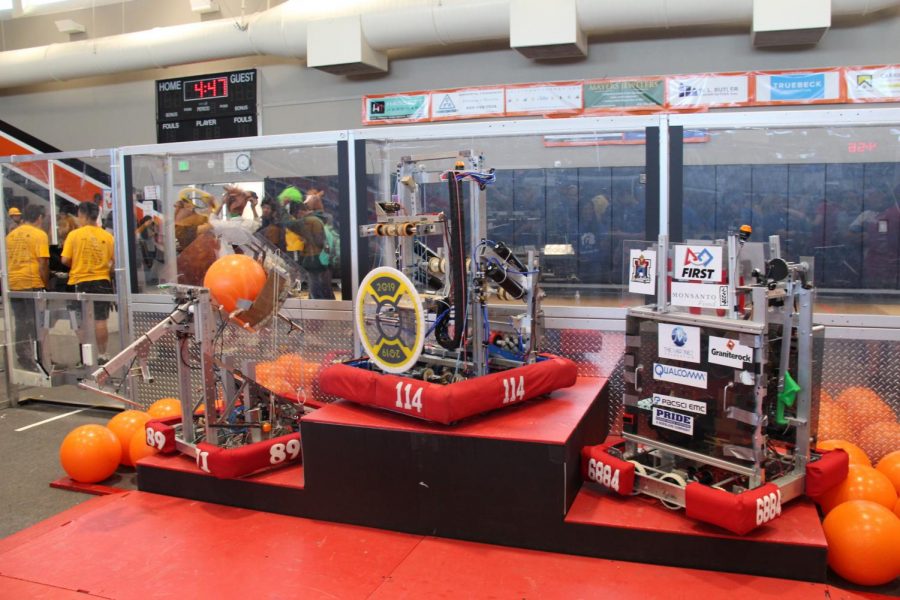 By Lucas Bricca and Rachel Rudyak

The Los Altos robotics team, Team 114 Eaglestrike, won the annual CalGames regional competition on Sunday, October 13, and the team said they are prepared to play at a higher level than ever before in the upcoming 2020 season. The team’s alliance, which included rival Mountain View High, beat seven other alliances and a total of 35 other teams to win in the finals.

Following a robot malfunction that led to the team’s elimination during the 2018 regional competition, the team’s success in the CalGames tournament proved that they can be competitive against traditionally higher-caliber teams. Senior Kat Nasif feels they could be making a name for Los Altos robotics.

“This season has been a redemption season in many ways,” Kat said. “It’s motivating to see us dominate the field in a way that we haven’t for so long.”

Each of the 36 teams came to the deep space-themed competition equipped with its own large-scale robot. In random alliances of three teams, the robots’ objective was to pick up and place as many playground balls as possible in their designated bins in two and a half minutes. In order to do so, the robots first needed to secure disks on the sides of the bins to cover holes where the balls could fall out.

At the end of the initial qualification rounds, Eaglestrike, ranked in sixth, chose Mountain View’s Spartan Robotics, ranked in eighth, to accompany them into the elimination rounds as part of a final alliance. Mountain View High School robotics team co-president Mira Shah said the teams worked together to play to each other’s strengths.

Mira and Kat agreed that teamwork is an important part of the competitions because the robots must divide and conquer the specified tasks to be efficient.

“There was an immediate bond and we both knew exactly what each other’s robots could do before we picked [Mountain View],” Kat said. “I even knew the drivers beforehand.”

In the past, other local teams such as Bellarmine and Mountain View have dominated local tournaments, sweeping wins at the Silicon Valley and San Francisco Regional and the corresponding championship-qualifying spots. For this reason, Los Altos often travels to other areas of California to compete in regional tournaments. Robotics teacher Stephen Hine commented that the Los Altos robotics team isn’t “bad,” but the relative competition in the area is almost impossibly high.

“It was insane to be playing at a level similar to [Mountain View’s] caliber because typically we’ve always been the ‘ugly step-sister’ in terms of robotics,” Kat said. “We’re a much smaller team, so we don’t necessarily have the resources to do the same things as them. But to be able to play at their caliber—that was just insane.”