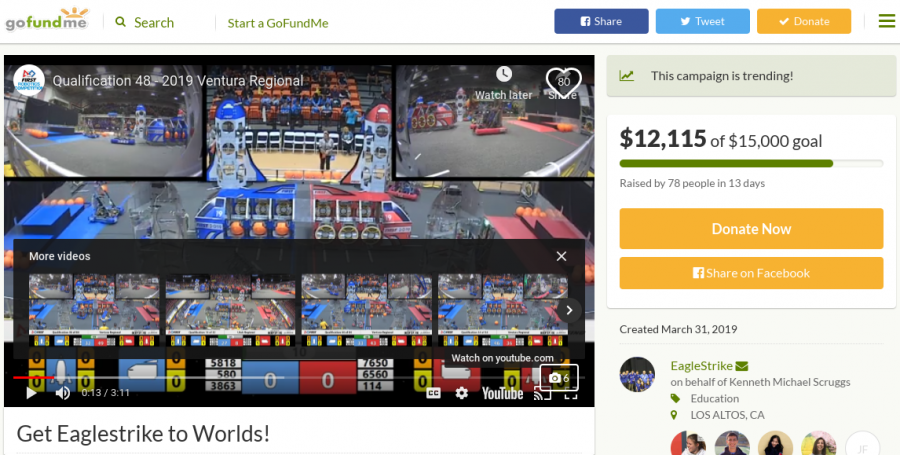 Eaglestrike started a GoFundMe to raise money to send their team to the FIRST World Championship in Houston, Texas from April 17 to 20.

On Saturday, March 30, Los Altos’ robotics team Eaglestrike won second place at the FIRST Ventura Regional and secured a bid to the FIRST World Championship, the world’s largest high school robotics competition. They also won the Innovation in Control Award for coding new libraries to program their robot in the computer language Rust.

Only 1400 teams in 70 countries have the opportunity to compete in the four-day World Championship, held this year in Houston, Texas from April 17 to April 20. Teams have to win a regional competition to receive a bid, and most teams, like Eaglestrike, attend two regionals a year. This is Eaglestrike’s second time going to Worlds since the team was founded 22 years ago. Their first trip to Worlds happened in 2017, but electrical problems led to the robot breaking down for most of their matches and a poor record at the competition.

“Two years ago at Houston, we ran into serious electrical issues that prevented us from working at the level we were capable of,” team co-captain junior Michelle Zhu said. “This year, our robot is fully functional and we’re heading off any potential issues. We’re going into this competition more prepared.”

At the Ventura Regional, Eaglestrike competed in 12 qualification matches to determine their place in the playoff bracket; in each match, they were randomly paired with two teams to form a temporary “alliance” that competed against other similar alliances. Games were comprised of teams attempting to score points by loading containers with rubber balls and flat discs.

Team co-captain junior Alice Kutsyy said the random matchups placed Eaglestrike in “unlucky” alliances against powerhouse teams. As a result, the team ended up in tenth at the end of qualification matches.

After the qualification rounds, the top eight teams each picked two other teams to form final alliances for playoffs. Eaglestrike’s robot specialized in scoring discs, which most robots couldn’t do well, so they were picked by the third place team despite their lower tenth place seed.

“At the competition, we were either the best or second best hatch and ball robot,” Michelle said. “Ultimately, this is what helped us when we were getting picked for alliances.”

Their alliance won every match in the elimination rounds and made it to finals. The final match was out of three: Eaglestrike lost the first match 70-100 and won the second match 79-72.

“We were like, oh my gosh, we’re capable of winning this,” Michelle said. “Then we broke right before our final match.”

Before the second match, the team realized that their disc mechanism had slightly fractured; they replaced it and had a fully functional robot in the second round. However, before the third match, the team attempted to add a stabilizing bar to balance the disc mechanism, but ended up breaking it instead. As a result, they were unable to play offense and score for their team in the final round. Eaglestrike was forced to play defense with their robot, and the alliance lost the third match by seven points with a score of 59-66.

“If we had been fully functional in scoring, we would have had a really good chance to win,” machining-lead junior Natalie Huang said.

At every regional, only the three teams in the first-place alliance receive bids to go to the FIRST Championships. Although Eaglestrike’s alliance placed second, two of the three winning teams had already won bids from previous competitions, so the extra bids got passed down to them.

“We honestly weren’t expecting this,” Alice said. “We knew our robot would do well. I was really hoping we would finish top five ranked. But to say that we would be going to Worlds at the end of our competition, I never would have expected that. It’s a big moment for our team, and we’re hoping that it’s enough to get us more money. ”

The team is mostly self-funded through company sponsorships and donation matching, having raised approximately $21,000 through these methods. However, the team wound up $500 in debt at the end of Ventura because they purchased expensive machinery, invested in cutting-edge technology and had to pay transportation costs to send the team to the regional competitions.

“Ventura was one of the later competitions and the World Championship is [only three weeks after],” code lead senior Jamsheed Mistri said. “However, we don’t have any money right now because we spent it all on building the robot and getting to these Southern California regionals.”

The basic registration cost for the World Championship is $5000, and costs for flights and hotels for students are approximately $1400. Since their Ventura win, Eaglestrike has been fundraising to meet the registration cost and lower costs for many students with a GoFundMe. Although they have already received enough donations to pay the registration fee, they want to raise an extra $10,000 to help lower student transportation and lodging costs. Their GoFundMe has raised $12,115 of their $15,000 goal as of April 14, 2019.