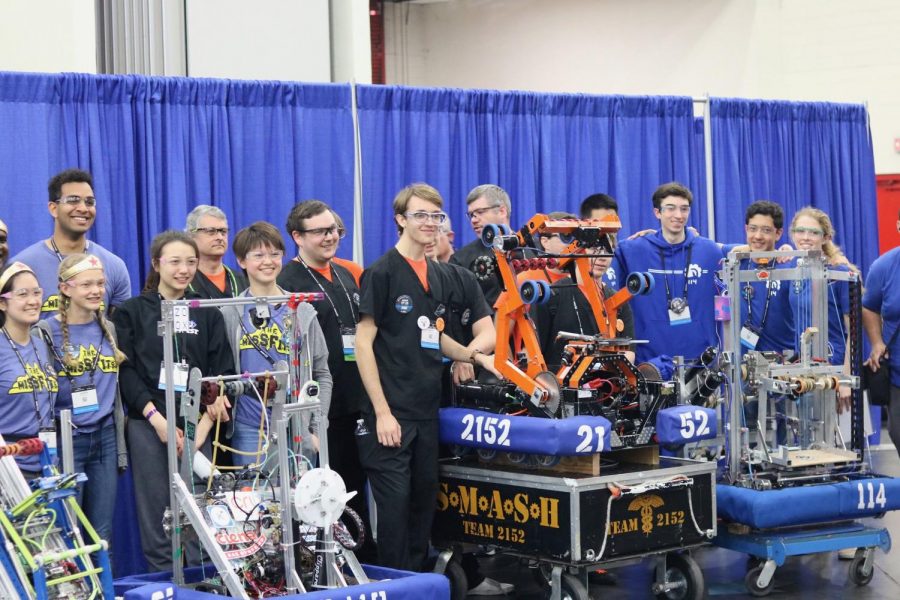 Los Altos' robotics team stands behind their robot, numbered 114, at the FIRST World Championship in Houston. This is their second time attending since the team was founded 22 years ago.

By Isabella Borkovic and Stella Huang

On Saturday, April 20, Los Altos’s robotics team Eaglestrike, also known as Team 114, placed as semifinalists at the 2019 FIRST World Championship, the world’s largest high school robotics competition. Only 403 out of 3,790 regional teams in 70 countries had the opportunity to compete in the four-day tournament. The qualifying teams were split into two divisions, with one competition in Houston, Texas and the other in Detroit, Michigan. Eaglestrike competed in Houston.

This is the team’s second time attending the world championship since the team was founded 22 years ago. Their first trip to Worlds happened in 2017, but electrical problems led to their robot breaking down for most of their matches and a poor record at the competition.

“Two years ago at Houston, we ran into serious electrical issues that prevented us from working at the level we were capable of,” team co-captain junior Michelle Zhu said. “This year, our robot [was] fully functional and we [headed] off any potential issues. We [went] into this competition more prepared.”

In order to earn a bid to the World Championship, the team had to win a regional competition. Most teams, like Eaglestrike, go to two regionals per year. Eaglestrike won their bid at the Ventura Regional on Saturday, March 30 and placed in the top four out of 42 teams. Although Eaglestrike’s alliance didn’t win first place, two of the three winning teams had already won bids from previous competitions, so the extra bids were passed down to them.

“We honestly weren’t expecting [to place second in the regional],” team co-captain junior Alice Kutsyy said. “We knew our robot would do well. I was really hoping we would finish top five ranked. But to say that we would be going to Worlds at the end of our competition, I never would have expected that. It’s a big moment for our team.”

At the World Championship in Houston, the teams were randomly divided into six subdivisions, and within each subdivision, teams competed to qualify for the final round. Eaglestrike was part of the GALILEO division and played ten qualification matches to determine their seating in the subdivision. After competing in half of the matches at the end of the first day, Eaglestrike was ranked first.

“It was super exciting because being ranked first at World is a crazy opportunity,” design lead junior Kat Nasif said. “We were able to spend the whole night [knowing we were in first place], but unfortunately, since I’d done the match analysis beforehand, I knew we were going to drop the second day because we were up against some really hard teams.”

Although Eaglestrike fell to 22nd place on the second day, they were chosen to join the fifth place alliance. The alliance picked Eaglestrike because their robot specialized in quickly picking up rubber balls from its back, which complemented the other alliance members’ robots.

In the quarterfinals on the third day, the team was matched up against the fourth place alliance. Their opponents included High Tide 4414, the team that Eaglestrike lost to at the final match of the Ventura Regional.

“They won by seven points [at Ventura],” Kat said. “As one of our team members said, the tide’s not so high anymore, because we beat them [at Worlds], and they have a lot of prestige to their name. Now our robot’s name is Redemption because we beat [our old rivals].”

At the semifinals, Eaglestrike faced the first place alliance headed by Team 971, Mountain View High School’s robot. Although the two alliances were evenly matched, the first alliance prevailed because of their robots’ speed and agility; they won two games with scores of 88-69 and 92-86.

The MVHS alliance ultimately won the GALILEO division and made it to the finals. Although Eaglestrike didn’t take home a banner, their accomplishment at Worlds is a highlight in the team’s 22 years at Los Altos.

“It feels absolutely incredible to work so long on such a time-consuming project and to see it all come together at a competition as competitive as Worlds,” Kat said. “Worlds has been my dream since the day I joined Team 114. The reason why we did so well wasn’t necessarily [just] skill. It was a lot of time commitment, and [it took] a lot of perseverance to really push through.”