Competing unprepared, the team's resilience and problem-solving pulled them through. 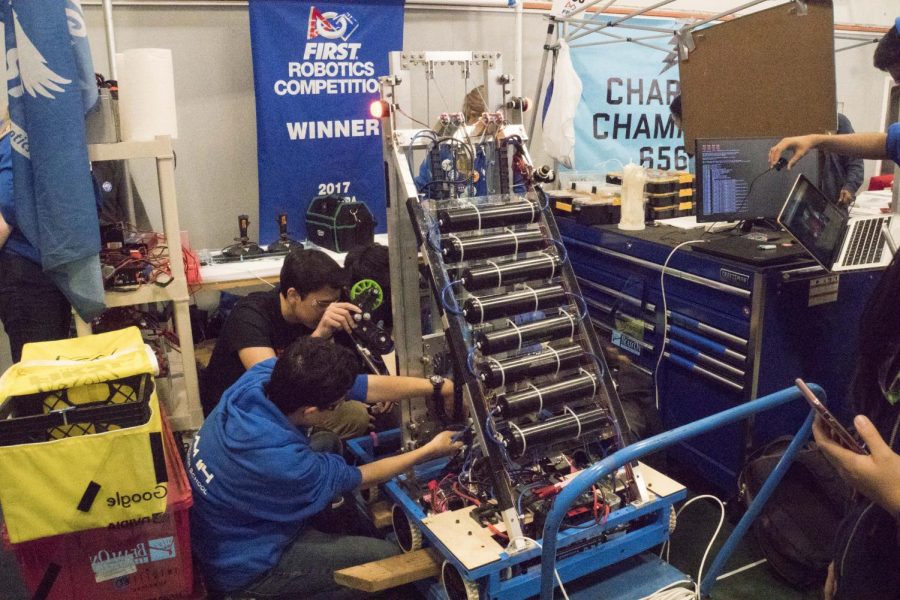 Team members junior Nick Borda (bottom left) and senior Drake Moore (center left) work on the elevator system after a malfunction on the second day of the Ventura Regional. The team finished in semifinals despite a delayed build season that pushed back coding and driving practice. Courtesy Ryan Cardona.

By Justin Yu and Kristen Fan

Although hamstrung by mechanical issues and a delayed build season, the Los Altos Robotics Team placed in semifinals at the Ventura Regional tournament, which took place from Thursday to Saturday, March 29 to March 31. This was the team’s second time competing at Ventura after winning first place last year.

Difficulties in designing the robot using computer models and in prototyping physical models to test those designs pushed the team behind schedule. That in turn gave the team less time to code and less time to practice controlling the robot. With new, inexperienced drivers who hadn’t worked together enough to establish good communication yet, the team entered the competition unprepared.

“Getting behind during build season early on [led] to things like [the electronics team] having less time to work and allowing issues like the touch sensor shorting to happen,” Drive Coach sophomore Alice Kutsyy said. “We are working to get more people on [computer design] for next year, since there were three people this year and that obviously doesn’t make the [build] process fast.”

Still, the team’s semifinals finish and ability to overcome the hurdles they faced at the tournament show how the team has improved in engaging new members and delegating tasks compared to previous years. Almost all new members jumped into the pits to help, and the leads this year also knew when to ask for help.

“It is easy for new people to just go and observe without engaging in the competition activities, but there were not many students that stayed up in the stands with the mentors,” co-adviser Stephen Hine said. “We have had stubborn leaders in the past that refused to ask for help because they were convinced they were the only ones who could figure out the problems. This year our leaders recognized when a problem was beyond their ability and then learned from an expert.”

The first day of the competition, teams competed in practice rounds and fine-tuned robots. Over the next two days, Los Altos competed in a set of 12 two-and-a-half minute qualification matches —  in which two “alliances” of three randomly assigned teams faced off — to determine their placement for playoffs. This year’s challenge centered around robots performing three main challenges: placing yellow “power-up cubes” into switches, placing them on a scale in the middle of the game field and using an elevator system for the robots to use to climb up a middle ladder.

The second day of competition started out well, with Los Altos scoring high in their first few matches with few mechanical problems. Although the team had a new driver who steered the robot and a new operator who controlled the robot’s secondary functions, they quickly picked up their new roles.

But as the day progressed, the team ran into mechanical issues with the elevator system used to pull the robot onto the ladder. An issue with wiring for the touch sensor — which was supposed to detect contact with another part of the elevator system — led the circuit to malfunction. Because the code did not account for this scenario, the team had to rewire the circuit, which took time. After fixing these issues, the team’s ranking had plummeted, ended qualification matches with a win-loss record of 7-5.

“[The team] dramatically improved over the competition matches,” Hine said. “[That] proved that if we had given them more time during build season, we probably would have performed much better.”

For playoffs, Los Altos was picked as a third member of an alliance to join two other teams, The Devil Duckies and The Hammer Heads, both from San Diego. In their quarterfinals match, they gained 27 points from a 30-second autonomous driving stage and 370 points from manually driving the robot. The alliance breezed through their quarterfinals match with 407 points over their opponent’s 150 points. But they lost in their semifinals round because of their lack of practice communicating, which means the team did not advance to the national competition.