Robotics Prepares for Its Upcoming Season 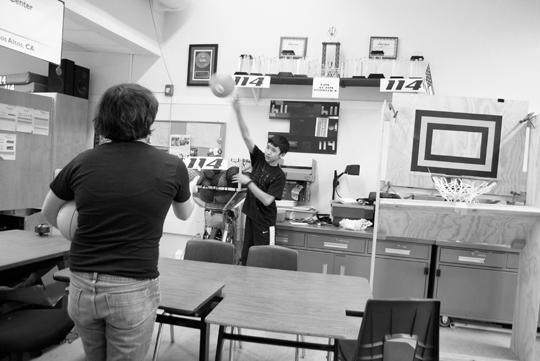 After finding out this year’s challenge on January 7, the Robotics Team has been preparing for its upcoming competitions at UC Davis and San Jose State University.

This year, the challenge has two separate parts. Teams must build a robot that can shoot a basketball through a hoop, which involves making the robot pick up the basketball from the ground and then use enough force to throw the ball accurately.

The other portion of the prompt consists of teams choosing between making the robot cross either an eight-foot long and four-foot wide bridge built like a see-saw, or a six-inch tall and four-inch wide bump. The Robotics Team chose to program its robot to cross the bridge.

“We have a very thought-out system of design,” junior Nolan Brown said. “The process for programming is going exceptionally well.”

The robotics members stay from 3:30 to 9 p.m. every day after school to work on their robot. They also come to school on the weekends.
The team considers itself in better shape compared to past years due to better organization. The team spent its first few days planning out the mechanisms needed to build the robot.

“We’re more organized this year because we actually have a schedule that we hold to,” Co-president senior Emil Annevelink said.

To build the robot, the Robotics Team has split up into three different sections: design, machinery and programming. Design involves blueprinting every part of the robot that needs to be created. Machinery involves creating the specific parts from the blueprints. Programming involves writing the codes necessary to instruct the robot to perform a variety of actions.

“There’s no lesson plan or real objective in [robotics],” Emil said. “It’s not like we teach this, this and that. If you want to be involved you’ll learn how to do 90 percent of the things that we do in robotics.”

This year was the first year when the teams participating had the option of incorporating the Microsoft Kinect into the building of the robot.
Originally, the team planned on utilizing the Kinect’s multiple cameras to “see” the field through the perspective of the robot and score baskets more accurately. But the team decided not to use the Kinect because it would complicate the programming portion.

“We didn’t do it because it adds another level of complexity to the coding,” Emil said. “You might as well code 100 percent autonomous.”

The Robotics Team also had more underclassmen this year. During first semester, they mostly learned how to use the tools and work around the shop.

“The pace [at robotics] seems a little fast for the freshmen,” freshman Ryan Wong said. “But I think I’ll be doing more later on. It seemed interesting for me to try robotics, and I liked it.”

After the prompt was released, every member was involved in helping out.

“This is not just a one-generation program,” junior Sammy Guo said. “We need new [freshmen]; they will have to teach the next group and it cascades down.”

This year, the Robotics Team created a website to compete for a First Robotics Website Award. The competition has a list of requirements necessary to receive the award. In addition to the requirements, the team also posts daily updates about its progress. Viewers can also ask the team questions on the website. The team uses the website to keep track of its schedule and make sure that they are on track.

“It’s cool to look back in a year or two,” Co-president senior Jamshed Vesuna said. “We also got to connect with a lot of other First Robotics teams.”
Unlike other schools’ robotics teams, which have more sponsors and mentors to help out, the school team relies on itself to build its own robot and, to “learn through mistakes,” Jamshed said.

The team is focusing on accomplishing its goals instead of winning.

“It’s great to have success,” Emil said. “But we want affirmation that the things that we set out to do at the beginning of the year worked, and we accomplished the goals that we set out for ourselves.”