Robotics levels up in the offseason 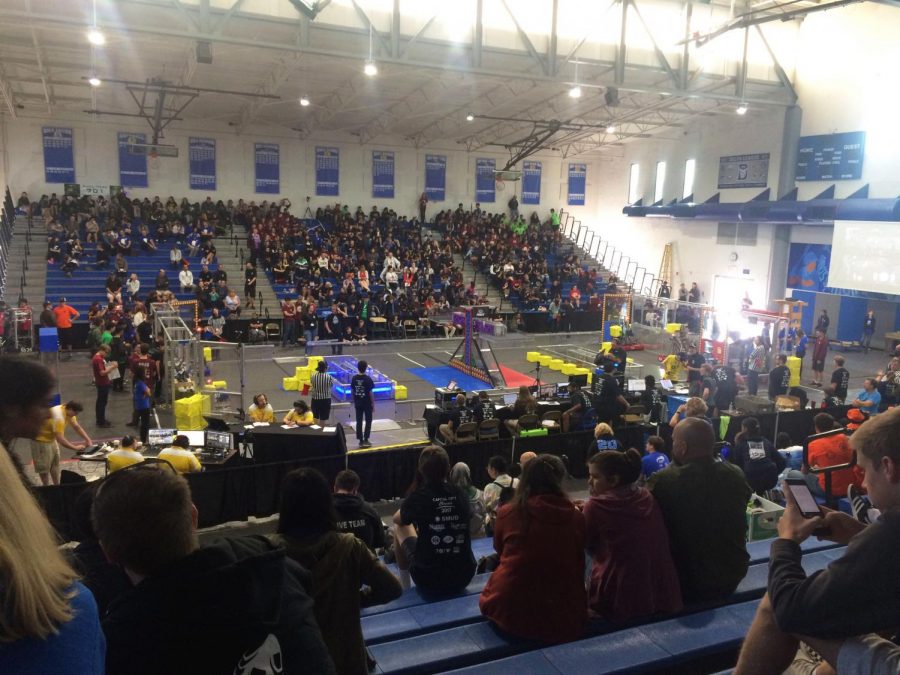 Eaglestrike prepares to compete before a match at the Capital City Classic. Their robot will need to climb and place cubes on three different scales. When competing, alliances of three teams must tip the scales towards their side, which earns them points by the second. Courtesy Matthew Lin.

By Suzanne Guo and Anya Sharma

A few weeks after placing second in the CalGames tournament at Woodside High, Los Altos’s robotics team, Eaglestrike, managed to maintain their successful streak at the offseason Capital City Classic competition in Davis, held on October 27 and 28. They made it to semifinals, which was an improvement from last year’s quarterfinals finish.

The next morning, Eaglestrike returned for the elimination rounds as alliance captains with teams 5026 Iron Panthers from Burlingame and 4698 Rio Robotics from Sacramento. Although they won quarterfinals, they were eliminated when they lost two out of three matches in semifinals.

Throughout the fall, Eaglestrike has been improving their robot to prevent past complications from occurring again. At CalGames, the team faced issues with malfunctioning robot extensions, a snapped axle and a severed motor wire. They were able to solve these problems within minutes, yet their major setbacks still kept them from placing first.

“Our robot wasn’t that good [before CalGames] since we didn’t really plan it that well,” robot driver junior Derek Hua said. “Next year, we want to make sure we’re on schedule, we’re focused on the task at hand and that we build [what we’re capable of building].”

Other than problems with illegal gameplay from another opposing team, Eaglestrike’s robot experienced few technical issues at the Capital City Classic due to the team’s pre-game preparations.

“We looked really strong,” said team captain junior Michelle Zhu. “Other than the three teams at [the Capital City Classic] that are the powerhouses who dominate [the whole] competition, I’d say we’re either the top or one of the few top teams.”

Eaglestrike began the season last January with a six-week building period to design and construct a robot specialized for this year’s game challenge. In January 2019, a new robotics season will begin and the team will develop another robot for a different game. Encouraged by their previous performances this fall, robotics members hope to carry their successes into future competitions later on in the year. Ultimately, they hope to win other regional tournaments in the spring and qualify for the World Championships held in April at Houston, Texas.

“I feel like we have a really strong team this year,” said design-lead junior Kat Nasif. “And with the current trajectory that we have, we just kind of need to harness this new energy and this new life that all these new freshmen are giving us. We have a lot of experienced members, so if we can just find a way to harness this good energy and bring it into build season, I think we’ll have no problem becoming a really strong team.”