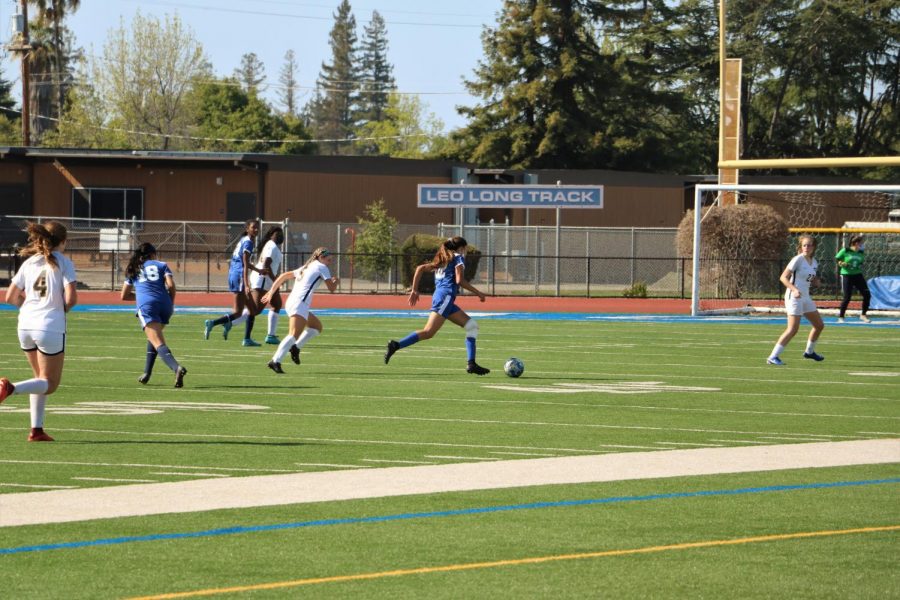 The varsity girls soccer team went head to head against rival team Mountain View High School yesterday for the second time this season. Although the face-off was on our home field this time, the Eagles lost 4–0 in repeat of their previous game.

The LAHS girls team gave up two goals in each half of the game, one resulting from a penalty kick 30 minutes into the game. The referee seemed fond of her whistle, as frequent fouls and turnovers were called against both teams, frustrating many of the athletes.

Despite struggling against the other competitive teams in the league, the Eagles keep the team’s energy alive through sportsmanship and spirit. Athletes from both teams even got together for a post-game pizza dinner — nothing brings two rivals closer than their shared love for greasy cheese.

“My teammates have really taken me in this season,” Co-Captain sophomore Dani Sayer said. “I’m on the younger side, but the upperclassmen have made a noticeable effort to connect with all of us, and our spirit has been one of my favorite parts of being on the team.”

Besides having no seniors on the girls soccer team, the Eagles have suffered numerous injuries this season, taking several players off the field.

Sophomore Charlotte Wheeler was injured in the first game of the season against Palo Alto High School and finally made her comeback in yesterday’s game. Just as one player was gained, though, another was lost.

Junior Maddie Lee injured her left ankle during the start of yesterday’s game and was lying down for around 10 minutes before being driven off for medical care. Head coach Marcos Giovannoni went with Maddie, leaving assistant coaches Christian Mendoza and Jason St. Laurant to lead for the rest of the game.

Further challenging yesterday’s game was the absence of  goalkeeper sophomore Sarah Starkey, due to an ankle injury from practice the week prior. Sophomore Keira Gowers filled in as a substitute keeper for this game.

Co-Captain junior Esha Gupta persisted despite playing on a hurt knee. In fact, she carried a majority of the forward action, taking the ball nearly all the way up the field alone. As a co-captain, Esha encouraged the team throughout the entirety of the game, despite the many setbacks.

“I really like how the whole team kept the same mentality that we went into the game with: Go in ready to fight and ready to compete,” Esha said. “We went in knowing we may not be as technical of a team as MVHS, but even in the first 10 minutes, we had multiple shots on goal and we knew we were there for each other, so we kept a great fighting spirit.”

As she looks forward to the rest of the season, Esha hopes that further developing their strategies and player connection through practices will help the Eagles score more in future games.