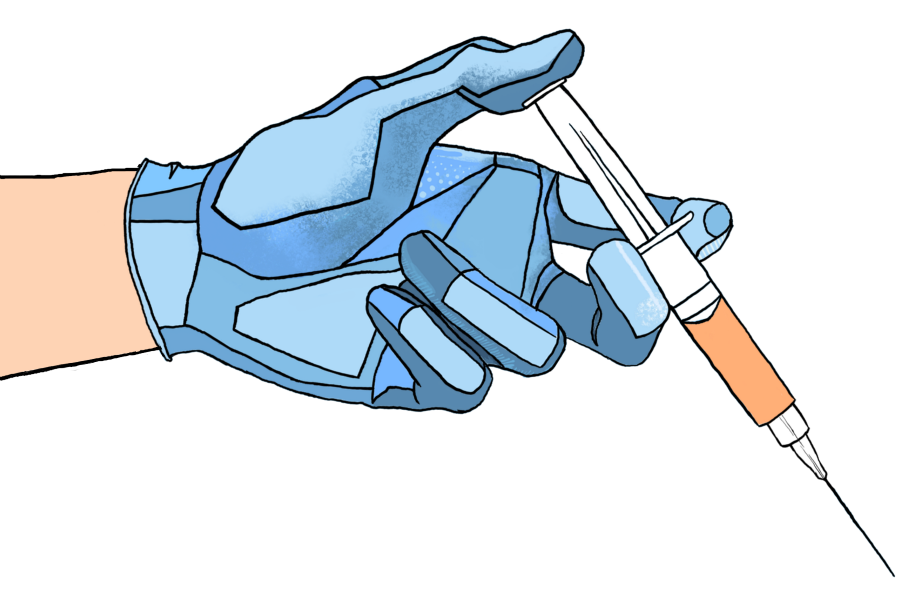 Los Altos is sitting in the middle of one the most important and alarming public health phenomena of this era. We live in the epicenter of a dangerous anomaly, an anomaly which is simultaneously biological, ethical and psychological. In the Bay Area and in other pockets throughout the United States, educated parents in wealthier communities are around 4.6 times less likely to vaccinate their children than parents in poorer communities.

Take Imperial County for example. Located in the most southeast corner of California, it has a median household income of $41,255. Santa Clara County, by contrast, has a median household income of $91,702, approximately 2.2 times higher than that of Imperial County. However, despite the apparent financial advantages, preschool-aged children in Santa Clara County only have a feeble 88.07 percent vaccination rate to contend against the 97.39 percent that Imperial County presents.

To understand this in context, first take a step to understand a fundamental principle of epidemiology: herd immunity. Herd immunity or community immunity is the virtual protection from a pathogen that an unimmunized individual acquires when a critical mass of the population has been vaccinated against that pathogen. If, on average, over 90 to 95 percent of the population is immune, an outbreak is unlikely to occur, and even if it does, its spread is quickly stifled. If there were an antonym for a self-fulfilling prophecy, herd immunity would be it ―  if everyone were to rely on herd immunity, there would be no herd immunity.

Why Should We Care?

“The [anti-vaccination] issue has two components,” Stanford professor of child health and society Paul Wise said. “One is ethical: that it’s not morally sanctioned that parents can not immunize their kids because they expect everybody else to immunize their kids; that’s just not morally acceptable as a society. There’s a technical question about when herd immunity falls below a certain level, and if you don’t mandate these things by law, it’s gonna fall.”

The failure of herd immunity is particularly detrimental for those who rely on community immunity as their only form of protection against pathogens. For example, immunocompromised children, whose immune systems are impaired and dysfunctional, rely solely on herd immunity to safeguard them from measles because they cannot receive live vaccines. Parents’ conscious decision to not vaccinate their children is jeopardizing the health of the immunocompromised.

In Santa Clara County, 88.07 percent falls significantly below the threshold for herd immunity. In simpler terms, fewer children in our community are immunized than is considered safe.

“If you start to drop below [the threshold required to achieve herd immunity] even by a couple percentage points, it has a big effect for the whole population,” said Lauren Braun, the founder of a nonprofit called Alma Sana Inc., which aims to raise vaccination rates in children in rural areas of third world countries using a reminder bracelet. “So the fact that it’s a growing number of parents, even though most parents are still vaccinating their children, ends up putting everybody at risk.”

One of the biggest misconceptions is that the lackluster percentage of immunizations is due to people who can’t afford the vaccines. In actuality, according to Wise, money really has nothing to do with the issue.

“It’d be unusual that the standard immunization packages would not be available because of finances,” Wise said. “In theory, for immunization, because of its public health importance, there are generally ways to overcome any financial barriers.”

Programs such as Medicaid, Obamacare and other financial aid systems that target different demographics are available to most people in the United States.

Why Is This Occurring?

This issue is transparent in its importance and its pertinence to wealthier demographics, but the reason why our county is less vaccinated is not black and white. Dr. Tumaini Coker, Associate Natural Scientist at the RAND Corporation and Assistant Professor of Pediatrics at UCLA, attributes the irrational decision of not vaccinating to the power of storytelling.

“People perceive a health or developmental event and they attribute it to the vaccine rightly or wrongly so,” Coker said. “But once they have attributed it to a vaccine, it’s really hard to get around that… People make decisions more on stories than on reality. That’s human nature; stories are more convincing.”

And stories are everywhere: on social media, in the news, and even down the street. Many parents, Coker says, have personal anecdotes that are keeping them from vaccinating their children; personal anecdotes which defy facts and scientific research but are more powerful than either as a reason not to vaccinate. Many anti-vaccination blogs, largely run by skeptical and somewhat delusional mothers, preach the downfall of vaccines everywhere because “vaccines kill children.” Their evidence? Stories. Unscientific, subjective stories largely provided by grieving mothers looking for a scapegoat for their children’s illnesses.

The issue of devaluing objective science is further exacerbated by the extensive anti-vaccination messages that influential but not scientifically knowledgeable people have been spreading via social media. On March 28, 2014, Donald Trump tweeted, “Healthy young child goes to doctor, gets pumped with massive shot of many vaccines, doesn’t feel good and changes – AUTISM. Many such cases!” It is this kind of pseudoscientific nonsense that is broadcasted to crowds of millions: 5.98 million, in the case of Donald Trump’s Twitter. It is this kind of insubstantial statement that spawns from the mouths of politicians and celebrities alike and jeopardizes the physical well-being of otherwise well-off children (not unlike those in Los Altos).

“The pro-vaxxers are not very vocal, but the reason for that is because… [it’s something] we don’t even have to have a discussion about,” Braun said. “[On the other hand], you have this quiet, small, but very, very vocal community of anti-vaxxers that’s banging a lot of pots and pans and getting louder and louder.”

However, where some parents are easily swayed, others are resolutely stubborn in their beliefs and firmly rooted in their paranoia. Such fears are rooted in something more innate than a Facebook post; it is more of a substratal instinct, approaching that of a phobia.

Another issue is the social aspect of the dilemma: Rich communities have begun to accept anti-vaccination because of the views of others in their community.

“Communities and neighborhoods are very important in creating health beliefs all over the world,” Wise said. “And it’s something, as a physician, you have to respect. Generators of policy have to respect that there’s heterogeneity in people’s beliefs and, almost always, parents are acting in the best interest of their own kids.”

It’s almost a shame the wealthy and educated do not appreciate their access to good healthcare and timely immunization, but then again, access isn’t the issue. The issue is the media; the issue is paranoia. The issue is this primeval fear; it is societal norms. But most importantly, the issue is complex.

What Can We Do?

California has recently taken action on a governmental level: according to the bill passed by Gov. Jerry Brown on June 30, 2015, parents will no longer be able to refuse vaccination for their children based on personal belief. If children do not receive the 10 required vaccines mandated by the bill, they will not be able to attend any school or child care as of July 1, 2016. Because of how recent the mandate is, the specific effects of the change are difficult to predict.

California is not the first to ban personal belief exemptions, however: only 18 states still allow the philosophical exemption, although many still allow a religious exemption. Despite its unoriginality, the change is very controversial, even among medical professionals.

“Not all pediatricians agree with a legal mandate, and a lot of pediatricians say it’s a good idea to get your kid immunized, but it’s also parental decision and we respect that,” Wise said.

On a social scale, publicity could be effective, as positive publicity for vaccinations could appeal to the more easily swayed. Though it likely wouldn’t affect the views of the more tenacious anti-vaxxers, media attention discrediting anti-vaccination theories could be a step in the right direction.

On a personal level, we should examine evidence and think rationally before making decisions about our health, or the health of others. Confronting and convincing anti-vaccination supporters on an individual level is often unsuccessful, but letting them voice their opinions could be a step toward a solution.

“In my experience, when I’ve been more successful, I’ve been trying to get the parent to tell me their reasons [for not vaccinating],” Coker said. “When you actually try to get some parents to express their reason, often they don’t have a finite reason… they don’t really have something that’s concrete.”

The heart of the dilemma is this: The rich are not getting their children vaccinated for reasons far more trivial than the risk of infecting other children. Their decision is weakening the already-fragile herd immunity. Despite clear and definitive scientific evidence on the safety and efficacy of vaccines, a growing minority of parents are still choosing not to vaccinate, for an assortment of different reasons that all have the same detrimental effect.